When My Husband Came Out as a Woman

My husband came out to me as a woman this summer, three days after our five-year wedding anniversary. We were supposed to have our first date with a babysitter that night, but she bailed on us. Instead, we went out as a family for an afternoon drink at the local pub, fresh from the pool where I spent pretty much every day this summer with our four-year-old daughter.

It was a damn good wedding anniversary. I think we were both feeling that our marriage had arrived at its strongest ever. He gave me a delicate diamond ring; my own, my style, as opposed to the hand-me-down I got from his mom when we married. And he read me the vows that afternoon in the sun at the pub’s deck over beers; the vows he never got around to writing five years before. It was precious.

Sitting on the couch together those three nights after, he didn’t tell me “I’m transgender.” Honestly, it took me a while until I understood just what he was trying to tell me. But when he started talking about remembering as a young boy, maybe at four or five, going to bed choking his head into his pillow, desperately wanting to wake up as a girl — well, then I understood.

When you really love someone, you want them to feel good about themselves and to be happy in their skin. The overpowering feeling I had that night was simply this: “darling; this will be okay!”

That following month, all I cared about was empowering him to feel good about himself presenting and coming out as a woman. I suggested he start by telling our four-year-old; the following week we did and they played dress-up together. It was sweet.

At the end of that month, we had an amazing first couple’s only vacation in Denver, Colorado while our little girl was with her grandparents. We went out together like we never have before, staying out late, dancing and drinking, both in dresses and heels.

Tension was beginning to accumulate between us though because while he didn’t feel ready to come out, I was going crazy not being able to talk about it with anyone, or to write about it. I write about what I care and think about. Focused on supporting and encouraging my husband and also reflecting on what this meant about my own sexual orientation and gender identity, any other writing plainly lost its relevance to me. I’d sit down to do some planning for the launch of my After Pornified book, or write something for Good Vibrations Online Magazine, or for my Love, Sex, and Family site. And I’d mentally compose posts for my blogs at New porn by women and Quizzical mama, but instead I’d open a Word document, and I’d write about Coming Out.

In hindsight, I wish I’d been better about articulating my need to process and share the news with others. I grew up not having my needs met, so needs were something one better not have. Having needs was being needy. Not a good thing. So he wasn’t ready to come out, fair enough; but this was about me too, and I had a need to process it.

I never got around to articulating any of that until after things got sort of out of hand. After our vacation in Colorado, he began to tell his best friends from college. A cryptic post by me on Facebook, tagging one of the friends he’d told while expressing how proud and excited I felt for my husband, sort of tipped the glass over. Furious at what he saw as my betrayal, he left the room in a huff, and called both his parents to tell them.

As it turns out, he would feel good about this heat-of-the-moment coming out episode; suspecting that it otherwise might have dragged out before he’d come around to telling his parents. This way he was done with it and it was out there.

Things began to roll fast. He told me beginning of July. We got back from our vacation end of July. A month later, he had his letter in hand from his psychotherapist that he was ready for hormone treatments. A lot of research had gone into getting that far. Firstly, how to avoid the requirement that one before receiving hormone treatment presents as the gender one wants to present as for an entire year while also seeing a therapist to prove one’s commitment to transitioning; a brutal thing to require for someone who feels they don’t look or present right and who’s eager to adjust their looks and presentation to make them feel more at home with how they feel about themselves.

My husband was lucky and found a consent program in Minneapolis through a clinic that offers a consent program to transgender youth. He only had to see the psychotherapist four times before receiving the letter, which he was able to do within four weeks, receiving his letter the Friday before I left for my first big trip overseas to promote my book in Europe.

August was intense. I was getting anxious with my book coming out, but whereas he’d always been my trouper, cheering me on, helping me out — just as I’d been his trouper, cheering him on, helping him out earlier that summer — I now found myself lonely and unsupported, a growing abyss between us. One giving birth to finally presenting as the gender he’d longed to present as throughout his life, the other giving birth to being a published author; a dream that I have had since I was a child.

Come September a new feeling arrived: that of grief. It took me by such surprise! I had been so excited for him, for us! I’d been writing enthusiastically about teaching young kids about sexual fluidity and I had no doubt about my own sexual fluidity as a woman and how cool that someone so easily dismissed as a privileged, cisgender, heterosexually married mom could finally come out and prove her real queerness. I mean, all my life my writing has been about freeing ourselves from stereotypes and conventions — cultural, existential, sexual. Whether I was writing about Friedrich Nietzsche or transformed porn by women. True, I had never been with a woman before; but wasn’t that perhaps because being with a woman gave me cold feet because I couldn’t perform “the script”? For years since my sexual debut, I’d thrown myself into sex with men not always only for the pure intention of pleasure, but also and sometimes more to be “rescued, saved and held.” The way I never was a child. With a guy you can fake the script, perhaps I was thinking; but with a woman? I wasn’t so sure.

But perhaps this wasn’t what was going on at all those few times where either I approached a woman (granted: always while intoxicated and I always retreated), or when I was approached by another woman (an each of those times always intimidated me, I mean; those women were all way too sexually confident for me — I would have had no idea how to proceed with them.)

Nevertheless. I had researched and written numerously about women’s sexual fluidity compared to men’s and in my everyday life I have certainly come across women who just exudes this something that makes me feel a little weak around them in some way or another. And I have no doubt about women’s openness in terms of what they desire and what gives them pleasure.

So, if I had some interest in exploring being with a woman, what better safe route could there possibly be than in doing it with your husband presenting as a woman?!

Well, the exuberant excitement of that kind of thinking was gone in an instant as soon as the feeling of grief arrived. 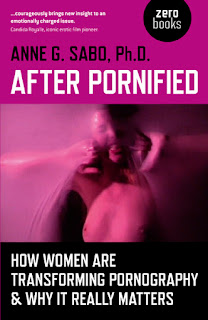 And well, so here I am this fall on tour in the US and Europe, at launch party after launch party, and people are talking about how cool to finally have someone speaking up for a progressive heterosexuality. Which is what I thought I had in my own life with my husband too. But then at the end of the night, I go back to my room and I Skype call home to my husband, and what I see is a woman. A woman who’s wearing even frillier shirts than even I would ever do!

So despite all my progressiveness and fluidity and screw-gender-and-let’s-think-about-ourselves-as-people kind of mindset, I find myself mourning my husband’s male body. I love beautiful male bodies; my book is also an ode to beautiful male bodies — we need to free our minds and bodies not just from the stereotypes about women, but also from those about men. Men are not just stupid studs with a hard dick that’ll fuck anything. My book is also about freeing men from discriminating ideas about what it means to be a man; dangerous myths about “boys who can’t help themselves” that continue to saturate college campuses.

This is where I’m at right now. Obviously, a person is more than a body and I love my husband, my spouse, my soon-to-be my wife, and not a he but a she, and not Leighton, but Elle. But a person is also a body, and I met Leighton just as I had finally come into my body and was beginning to fully claim, savor and enjoy it, exploring and experiencing what it truly desired and what gave it pleasure.

At the peak of my pleasure quest, I found Leighton. Eight years younger than me he was the sexiest most handsome most just ah, gotta-have-that-man kind of man to me. An adonis! I loved everything about his strong slender sinewy body; the feel of his flesh and the hair on his skin; the way his breath smelled in the morning, the salty taste of his armpits and chest, the curve around his hip bones, the tickling sound of his voice.

And I don’t know if we’ll be okay or if we won’t, and there’s a huge sense of panic and groundlessness and what the fuck is home feeling in that. So I try to just breathe. And I know that I have to give it time. To see which feelings are going to outlast the others, knowing that many new ones might still arrive too.

If I’d been free to write about this in July, this would have been a quite different post; an exuberant one! And not one about groundlessness and grief. But if my politics at first got ahead of me, I’m hoping that my personal might eventually catch up with it. Because I don’t want to lose this big love, my best friend, my child’s other parent, my spouse, my lover.