The Tyranny of the Gaze 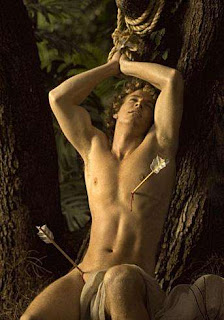 I enjoy teasing my boy about submitting to the female gaze. I enjoy having him kneeling, naked (or perhaps in some underwear of my choosing), on the floor, as I walk around him letting my eyes run over his skin, occasionally moving his limbs this way and that, my finger under his chin to force his big, blue eyes to meet mine. I like making him feel objectified, my plaything, something deserving of desire and focus and attention. Boys don’t seem to get that sensation often, because when I offer it, along with barely civilized smutty compliments, they blush with the praise. They’re used to their value being in their pocket, not their confidence in their skin.

It was part of the inspiration for the Andro-Aperture Project, a celebration of male beauty for the female gaze (and something I plan to get back to as my life calms down!) I was sick of seeing images from the male gaze being repackaged and marketed to women.

I have a weird relationship with the male gaze anyway. As a sex worker, I invite being gazed upon– if I didn’t, I doubt I would get much in the way of work, as a big portion of my advertising is unspoken and immediate. I try to invite that gaze on my terms- my photos are taken by friends and lovers, and therefore convey a sense of intimacy and warmth that professional shoots often lack. I try to focus on photos that hint at my sexuality rather than make it explicit- something I’ve often been complimented on. And my images are as playful as I am- the occasional silly costume is on my work site, and I don’t really work to hide my personal life online. I decided early on that for me, being a professional dominant woman also meant doing it on my terms, not playing a part written by someone else.

I both enjoy the male gaze and hate it- I enjoy encouraging it, for sure, as I like to be admired, but hate how often that becomes my only facet. I’ve been gazed at enough to feel ok with my attractiveness in the scheme of things, and rarely envy other women their bodies- but I also have a brain, and creativity, and playfulness, things that objectification doesn’t leave room for. I have certainly felt fetishized for my body type before- not sexy as a whole, but as a collection of body parts that woud be worshipped in turn. And of course, everywhere I turn I see objectification being used to turn my sexuality into an accessory for a man, to shame me for my acceptance of my fat, to remove power from me.

A great example, really, is modeling. The poses I chose at first when doing erotic modeling, the failsafe poses for such imagery (after paying a lot of attention to what works in advertising) often conveyed a sense of childishness, of sensuality that comes from submitting to a certain ideal of feminine behaviour– I did the head cocked to one side, the slightly opened mouth, the big eyes focused on the viewer. I wasn’t always even conscious of what I was doing, really, or what it meant when it came to how I was portrayed. I had photographers who tried to cover up my fat, hairy armpits, or my tattoos, to fit their version of what was beautiful. I’m much more conscious now, and my photos show me laughing, powerful, comfortable. I have gotten to the place where I gaze back, where it is dynamic.

There is this crazy idea that women aren’t physically attracted to male bodies, that the male gazer and the female being gazed upon is “just natural”, or that women’s bodies are “just more attractive”. I can’t help but wonder, if women didn’t find men’s bodies attractive, why would there be any heterosexual women..? It seems like it would be a biological imperative to find the male body attractive, at least for some of the population!

I certainly think seeing men posing in these “traditionally feminine” ways works for me- I would be intrigued and turned on by a boy who struck the same poses women do in ads, poses that suggest vulnerability, submission, flirtation, and sexual availability. I’m desperate to start on my Andro-Aperture first project- male pinups that are flirty without being ridiculous. I mean, when my boy tilts his head to the side, or puts his finger in his mouth, I get wet. There’s something immensely hot about how he presents his sensuality to me in a way that’s simultaneously seemingly passive and completely aware of what effect he’s having. I want him to be sexualized while I am not- just admiring his beauty without needing to offer my own sensuality.

Now, is that a female gaze as it comes from a female, or is it a male gaze because how it manifests (consumer/consumed)? I’m not sure I know the answer. 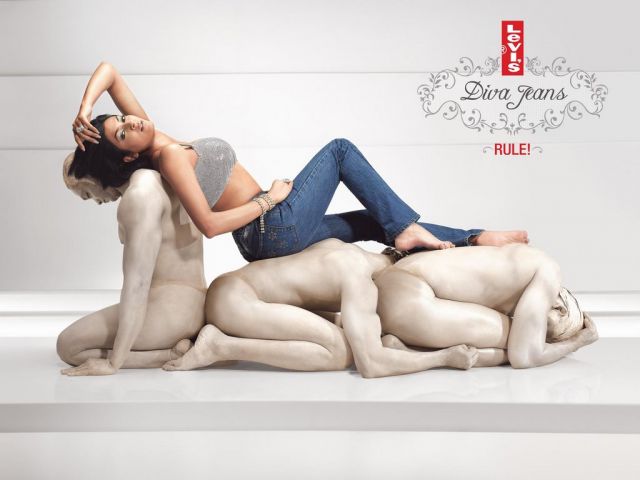 Though I kind of love men as furniture.

But this is all pretty new. So there hasn’t been enough material out there to really begin to say “yes, this works or “no, it doesn’t work. What I’ve found, however, is that women are becoming more and more comfortable with the public appreciation and consumption of the male erotic form- boylesque is a good example of this, for example. And we’re still fighting for that recognition- I went to a boylesque final heat in London, and despite the audience being 80% women, the panel was 4 gay men to 1 woman. While it’s nice to see men objectified as submissive in ads, too, it takes away from it when the women are also being sexualized and fulfilling that “prodomme” trope. If you want to see pretty men meant for your female gaze, you really have to fight to be heard.

Fangirls are a perfect example of the female gaze, as this article points out way more succinctly than I can. LJ icons objectify men’s bodies and faces in a way that more than mirrors the male gaze- and teen magazines certainly don’t put the “heartthrobs” they choose in magazines for their amazing intellect. Or another area that really reflected this was in the OkCupid photo analysis– women should not only look directly into the camera, but actively flirt into it for the highest message count- men, on the other hand, should look away from the camera. Interestingly, however, contrary to popular belief, OkC discovered that if you have a nice body as a man you should take your shirt off and show it- that the shirtless photo was second only to a photo of you with an animal in terms of attention. So perhaps this trend is shifting? 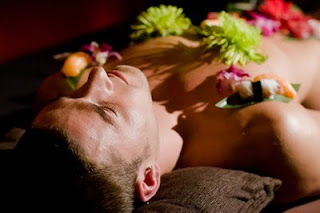 This all finally came to a head in my brain a while back when reading Julie Bindel’s article about going to a “Nyotaimori” party, where guests eat sushi off a still woman’s body. She, of course, hated it, likening the women who were the tables to “bodies in a morgue”. Meanwhile, I immediately wanted to have a similar party with male sushi tables (interestingly, Seattle and Minnesota have these events with both women and men- yay!)- I mean, think practically, people, men’s bodies are a little more flat, thus saving your sushi from falling onto the floor!  I’ve certainly found them to be good laptop tables in the past. Does my desire for this indicate some sort of unhealthy inability to connect with others, or is it just sexy good fun, along with combining pretty boys and delicious sushi?

But my boy, he likes to perform for me. He likes it when I gaze at him, when I let my eyes follow his chest hair, down to his belly button and below. And I like having him display his body for my satisfaction. I don’t know if it’s wrong, his desire to be leered at by me, or my desire to leer. What I do know is that in our lives, it feels like not a male gaze, or a female one, but the gaze of a predator surveying their prey.

And what willing, beautiful, and loved prey he is.