The Queer X Show: Feminist and Sex-positive Sluts on Stage 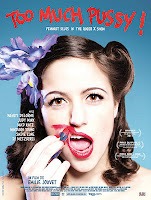 Filmed as a road movie slash documentary, Too Much Pussy! follows seven women on tour through Europe performing their Queer X Show. They are activists, artists, writers, musicians, sex-workers, and porn stars, and they take the work of sex-positive performance artist Annie Sprinkle yet a step further. In addition to clips from the women’s performances at venues in cities across the European continent, including in Paris, Cologne, Berlin, Copenhagen, and Brussels, we also follow the women backstage and on the road where we get to hear the women talk about and share their thoughts on women’s sexuality and feminism, and what being empowered and queer means to them. And we get to witness the strong sense of sisterhood they develop, and the strength they find in solidarity ” as women, and as lesbians and queers, aware that they are not always safe offstage. At one point they join in a candle walk commemorating the lives of the young women and men injured and killed in a shooting rampage at a gay youth center in Tel Aviv only a couple of years before.

Their van decorated by flowers and tampons, the women cruise through urban night scenes and different landscapes, asserting their right to explore the boundaries and intersections in their shows and in their lives between the personal and political, pornography and art, performance and reality. Several of the performance pieces deconstruct the boundaries of gender categories, while others examine what provokes desire and pleasure, including pleasure through pain.

Above all, the women on Too Much Pussy! refuse to let anyone tell them that they, their sex, are somehow “too much.” Invoking the goddess energy of women’s sexuality ” its transformative force and fertility”the women ditch the Madonna/whore dictum that divides women into “goody good girls” and “sluts,” and celebrate their bodies and sex on their own empowered terms. Rightly presented as a sex-positive feminist manifesto, Too Much Pussy! is in this way not simply a film for lesbians and queers; it is a film for anyone who cares about empowering women to claim and own their bodies and desires against a commercial media and cultural norms and attitudes that want to repress and contain the way women look and behave. Whether it’s rejecting our culture’s negative beauty ideals, and encouraging women to examine their own cervix the way sex performer Sadie Lune does as she displays her own to the audience (why should (male) doctors be the only ones to look? as she points out); or mocking, as performance artist and writer Mad Kate does, the inability to see ourselves without feeling constantly seen by others, be it on Twitter, Myspace, or Facebook.

While in these and several other ways seeking to empower all women to take ownership of their bodies and sexuality, Too Much Pussy! is also very much an important contribution to queer theory and activism. Explains Mad Kate:

A lot of the women on the tour are people that are sort of connected with the women that I found to be my heroes when I was in San Francisco; so in the literary scene, or in the performance art scene. When I was studying gender studies ten years ago in the university, we would read about these French theorists, and I think there’s a really long, strong tradition of French theory that has contributed to feminist theory and to queer theory, and also in the United States. It’s been interesting for me to see women my age growing up in France trying to access the information about the scene in places like San Francisco and New York, and bringing that into their world, and then vice versa. And now we’re the same age, and we’re the ones creating it. Finally it’s our chance to use what we’ve learned all these years and create something new, and further the idea and the term queer, and figure out what that means.

Stylistically, Too Much Pussy! will appeal to anyone who values original approaches to filmmaking and solid artistic competence. Accompanied by a strong, driven, urgent and compelling original soundtrack that ranges from upbeat to nostalgic, psychedelic to poetic, vibrating with desire to pumping with passion; and that well captures the shifting mood and energy of each performance piece and road-trip scene, the photography reflects Emilie’s eye for shots with texture and chemistry, accentuated by filters that add depth. The burlesque and kinky costumes by themselves make this film eye candy, as do the urban night life scenes and on-the-road shots, trailing highways, fields, and coasts. The effects of the handheld camera work well for this road movie slash documentary genre.