Definitions of words change. Crack open an Oxford English Dictionary and see how over the centuries words morph and transmute. It is the science of etymology that traces the history and evolution of language.

What you can’t find in the OED or etymology textbooks is how the meaning of a word or phrase can shift even as the definition stays the same.

The transformation is barely noticeable. It can happen over the course of days or decades, within the sphere of a personal relationship or throughout the collective consciousness of an entire community. The frequency and context of usage corrupts a meaning’s integrity. It takes on unflattering overtones. Becomes trite. Cheesy. Politicized. A clichÃ©. 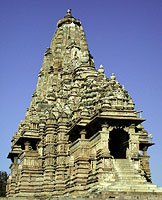 Regardless of what sacred sexuality may or may not be (a discussion best left for another day), the terminology has been co-opted by New-Agers, self-helpers, lifestyle magazines — by any and all forces that have deemed sacred sexuality packagable, marketable, saleable. An image. A lifestyle. The latest, greatest path to redemption. The next stop after your psychotherapist gets sick of your incessant whining and kicks you off the couch.

Mass media apprehends, appropriates and overplays a concept, a phrase, beats it into the ground until its value, like an overplayed pop song that was once everyone’s favorite, is utterly corrupted.

The inherent edginess has been gutted when you say “Tantra” and the first thing that comes to mind is Sting’s sexual prowess or a “Sacred Loving” retreat for middle-aged hippie divorcees.

This is one of my generation’s dubious inheritances — a language with only a fraction of its former potency. We’re left to either reclaim these words from the scrap heap of negative connotation or search out the new language we so desperately need to shape our consciousness, perception, identities. It’s vital that we find a way to communicate our minds. And I don’t mean instant messaging. I’m talking about stepping away from media — turning for a moment from the TV, from the 17″ flat-screen monitor — turning, face-to-face to another human, an inward motion. To Dad, girlfriend, roommate, someone randomly met on the street, whomever it is that for whatever indefinable reason we feel that connection, that longing to share our minds. Because to deny this urge to communicate — to connect — is to deny an essential function of what makes us human. And my hunch is that the urge is just as strong in you as it is in me.

One idea, one method of approaching this is to travel to the source, back to where it all began — and that’s exactly what I did. You want to talk about “sacred sexuality”? Then let me take you to the ancient Indian city of Khajuraho, 1000 years before anyone snatched the words out of our naÃ¯ve mouths — from the mouths of babes, as they say. 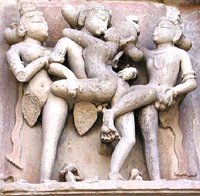 Traveling to Khajuraho is appropriately difficult. First, a crowded train ride to the armpit city of Patna. Then we hire an SUV for a lumbar crunching five hours hurtling over what they call a road, which is an extremely liberal definition of the rocky sea of mangled rubble we’re navigating through.

Which all points to why the marauding Mughal invaders from Central Asia never found the place and destroyed these temples, as they did in so many other instances.

The temples at Khajuraho were built between 950 and 1050. Only 20 remain, though many more were built. For centuries the temples were lost, enveloped by impenetrable jungle. They were rediscovered in the 19th century by British explorers, hacking away with machetes, on a mission from the Queen to find a shortcut to Delhi.

Admission is a few bucks. Wake up early and see the sun rise over the temples — and then make sure you return for sunset. This is the way the ancients intended the temples to be seen. Not to mention, your photos will look totally pro.

The carvings are awesome. Threesomes, foursomes; curvy temple prostitutes with Pamela Anderson breasts. Numerous positions from the Kama Sutra are outlined here — most infamous I think, is the carving of a woman being held by two servants: legs splayed over her man who is servicing her from an acrobatic upside-down shoulder-stand position. On another temple, a military scene: an army marches in relief around the base of a temple, soldiers leading horses. If you look closely though, you’ll notice one of the soldiers is leading his horse from behind — if you know what I mean. The ancients were not only dirty, but pretty damn funny too.

Walk into dark, unlit temples like cold caves furnished with smooth, stone altars in the center of the room. Wonder what they used to do on those? When there seemed to be nobody else around, my girlfriend and I almost tried to conduct a little ritual of our own, though perhaps everyone’s pretty lucky we didn’t, since the temple probably would have acted as some sort of amplifier for the telluric currents created by our simultaneous orgasms which would have exploded in an atomic blast mighty enough to blow India to smithereens. 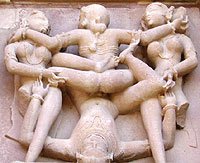 These temples are reminders of a lost culture that worshiped and practiced the myriad physical/spiritual connections between bodies. Perhaps sex was considered a science for tapping into the soul. No one knows really. Running your hands over the carvings, the stone a millennium old, you can’t help being inspired. You can’t help perceiving that somewhere our Western conception of these deeply spiritual sexual traditions went awry. That somewhere here in India — at least for me; for you it could be anywhere — is the foundation, a return to the fundamentals.

I could never discuss “sacred sexuality” with my 60-year old dad. Not because we can’t talk about sex, but because to him sacred sexuality is a silly, clichÃ©d subject. But if I watch my words, I can tell him about my experience at Khajuraho, what the temples are like, their fascinating history and my theories on why they might have been built. And there we go. We’re talking about it. Spanning generations, shattering cultural barriers. Just as long as I don’t say “yoga,” “Kama Sutra” or “karma,” he’ll listen and discuss with enthusiasm.

If you still insist on calling expensive 10-step Tantra and Kama Sutra seminars sacred sex, that’s fine with me. Not everyone is as sensitive to these things as I am. However, maybe it’s best not to call it anything. Maybe that’s the trick. Don’t give it a name, refuse to pigeonhole it into a category or stick it into a slot in the card catalogue or a focus group to demographic it. Is that possible? We’ve got to pull from all our experience here. Tell me what you felt when you visited Kandariya. I think, maybe, that particular experience is something that can never be bought or sold. Well, let’s not fool ourselves — everything can be bought and sold. The Indian government could jack up the price of admission and turn Khajuraho into a Tantric Disneyland. This really isn’t about finding the perfect answer, just finding a point of perspective from which to start anew.