Our latest Pleasure Poll explores the fabulous (though sometimes-elusive) orgasm. The respondents shared information about their experience with climax. Here’s what we learned.

We first asked, “Have you ever experienced an orgasm?” An overwhelming 96.97% said “Yup!”—it’s not that elusive to our pleasure-positive crowd, apparently! Almost 2% thought maybe they had, while a little over 1% said “Nope, not yet.”

Someone explains how close they get to orgasm.

But what happens when we bring out the toys? Solo play with orgasms resulting from toy stimulation (touching yourself with toys) broke down as follows: External stimulation of clitoris, penis, labia, and testicles was a regularly effective path to orgasm for almost 60% of respondents, and over a quarter reported it sometimes got them there. “Maybe once,” said a little over 3%, and almost 12% said “no, not yet.” One respondent told us, “I have had orgasms from internal stimulation, but only in combination with external stimulation.” We didn’t ask about that specifically, but this form of climax—called a blended orgasm by sex therapists—is very common, many finding it is more efficient than either single type of stimulation alone.

From “manual stimulation without toys.”

How about partner stimulation without toys? External genital stimulation of clitoris, penis, labia, testicles and the surrounding areas was a path to orgasm over 58% of respondents could count on, and over 26% said it sometimes got them over the top. “Maybe once,” said almost 5%, and over 10% said “no, not yet.”

What kind of difference does it make when a partner brings out the toys? Big O experiences from external partner toy stimulation (someone else touching you with toys on the clitoris, penis, labia, and/or testicles) account for regular orgasm for 35.4% of respondents, and over 30.4% reported it sometimes got them there. “Maybe once,” said almost 5%, and a little over 29% said “no, not yet.”

That’s a lot of orgasms! Congratulations to all our friends who have figured out their favorite ways to get off. But let’s get real right now. We also asked, “Have you ever faked an orgasm?” 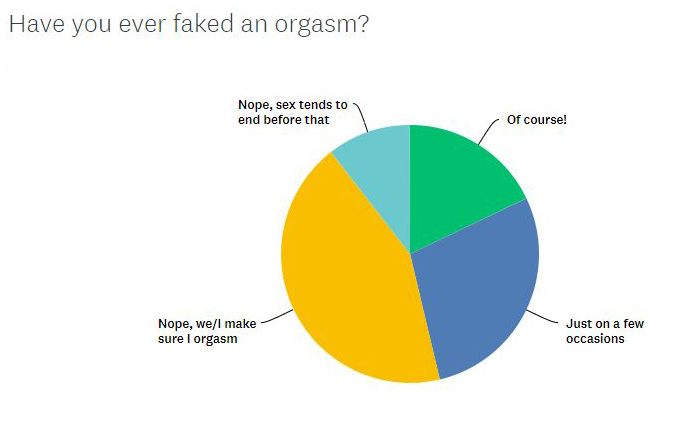 Over 43% said no. “We/I make sure I orgasm,” they said, and right on–nicely done! Another 10-plus percent told us that sex tends to end before the point of faking it. (Some research has suggested that one reason some people fake climax is to stop sex when they’re ready for it to be over.) 28.4% copped to doing so “just on a few occasions”—while our theatrical respondents said “Of course!” to the tune of 17.9%. Er, I’ll have what she’s having?

Now, if a person is faking orgasm during an event during which it takes two to tango, are their faux comes being recognized as such? We’re quite curious about that. So we asked, “Do you think anyone has ever faked an orgasm with you?” “Nah, I woulda noticed,” said just over 19%. “Highly unlikely!” said another 37-plus percent more. Others were more resigned. “Pretty likely,” admitted almost 29%, and “Yeah, it’s happened” to another almost 15%. 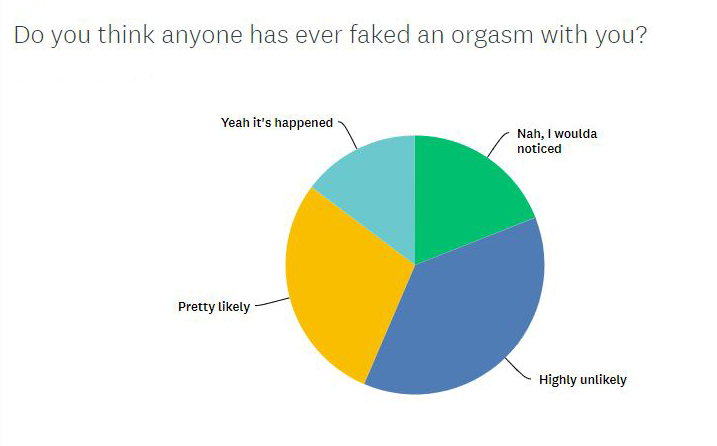 These two questions, taken together, imply there might be some room for improvement, or at least clearer communication, between partners. And what about those solo toy users who aren’t experiencing orgasm yet? Hence our question, “Are you seeking out or open to learning helpful tools about sex and orgasms?” Close to 62% said yes, redeeming our faith in education! Over 30% said maybe. 1.25% didn’t think it would help, and 5% said no. Of the two other replies, one was exploring kink in a monogamous relationship, while the other had become an escort and figured they could learn and teach!

Roughly 42% of our respondents were between 35 and 54 years of age. Close to 32% were younger, while a little over a quarter were older. Six didn’t specify age. 83 women, 66 men, and 11 people who identified in some other way (trans, nonbinary, agender, and “female-ish”) participated in the poll, plus five people who specified no gender identity/did not answer.

When we asked our respondents where they came from, here are the stops on our World Orgasm Tour: six did not tell us their country of residence, but people from The Dominican Republic, Mexico, Poland, Sweden and Thailand participated, plus six from Canada. Around the world in 80 ways!

The USA participated most heavily, with over 93% of survey responses. We asked what region of the country they lived in: Almost 35% were from the Pacific region, our home base. We’re in the Boston area too, and that was the second-highest region in terms of number of respondents at a bit over 20%. Next-highest was East North Central (Ohio to Michigan) with not quite 11%. The Mid-Atlantic states (NY, New Jersey, Pennsylvania) replied with a titch over 8%, then the South Atlantic region (from Delaware down to Florida) with almost 7.5%. Our friends in the Mountain states (from Montana all the way to New Mexico) responded with a little over 6%; and West North Central (Minnesota, the Dakotas, and the surrounding Plains states) at not quite 5.5%.

Less well-represented (but still standing up to be counted!) were East South Central, sometimes also known as the Deep South, whence a little over four percent of our respondents hailed, and finally West South Central (Texas and its neighbors) brought up the rear at a little under 3.5%. Vibrators have legally been an endangered species in Texas since 1973—I blame that for this apparent lack of enthusiasm for orgasm! (To be fair, a judge actually determined the law was unenforceable and unconstitutional in 2008—so maybe the Texans are really just so busy making up for lost time that they didn’t have time to spare for our survey.)

One of our favorite responses to “Have you ever experienced an orgasm?”

Wherever you are, we thank you so much for participating, and we hope you’ll want to share your insights and experiences in future Pleasure Polls.

Want to know more about orgasm? We have a reading list!

Living an Orgasmic Life: Heal Yourself & Awaken Your Pleasure

Orgasms: How to Have Them, Give Them, & Keep Them Coming

The Explorer’s Guide to Orgasm

The Ultimate Guide to Orgasm for Women