Thanks For All The Magic, Magic Wand!

There’s an argument to be made that the very existence of Good Vibrations — maybe even the whole women’s sex toy revolution — comes down to one iconic item.

It’s not the Rabbit Pearl, though that cute-cute-cute sex toy already had legions of fans before Sex & The City made it even more famous. It’s not even the pastel rocketship-shaped Smoothie, of which several jillion had been sold before I got to Good Vibrations in 1990 — and I sold another jillion myself after I arrived. No, it’s the Magic Wand — that unlikely-looking item that even today surprises people who have heard of it but never seen a picture of it, ask for it by name, and find that the world’s best vibrator bears no resemblance to whatever they thought a sex toy looked like.

In the Magic Wand, form follows function. It needs a powerful motor, a handle to grasp, a sizable head so that one can aim it (sure, you can massage your back with it, but please don’t fail to place it where your nerve endings will really appreciate the buzz: on or around the clitoris, corona of the penis, or whatever you call that part). It has all those necessary things in fabulous proportion, plus a cord to make sure that motor gets all the juice it needs. When new customers look at the Magic Wand with wide eyes, I know they’ve bought into the unsaid but pervasive social notion that masturbation = sex while alone, and sex = intercourse, and they’re supposed to put that thing where? I am always happy to debunk this, partly because, while I love vaginas every bit as much as the next person, to lionize them while ignoring the clitoris is simply poor sex education; and also because I know that when a Magic Wand goes home with a new Wand-owner, beautiful music will happen and a long-term relationship is likely to be born.

That’s why our — Good Vibrations’, I mean — longest-term relationship is with the Magic Wand. And the love affair goes back even farther. In 1973 Betty Dodson was already a famous figure within feminism, making sure that women’s sexuality and pleasure was not lost to all the other rallying points of the early Second Wave. Betty swore by the Magic Wand (and still does) — she wrote about it, drew fine-art pictures of women using it, recommended it in her Bodysex workshops. The very first woman-owned shop in the US, Eve’s Garden, opened in New York a year later; the story goes that its founder, Betty’s friend Dell Williams, had gone to Macy’s and asked to buy a Magic Wand, only to have the clerk helping her ask, smirking, “Whattaya gonna do with this?” Sexually harassed in the small appliance aisle! Dell opened a place where no other woman would have to contend with such nonsense when they were ready to fall in love with their own Magic Wand. 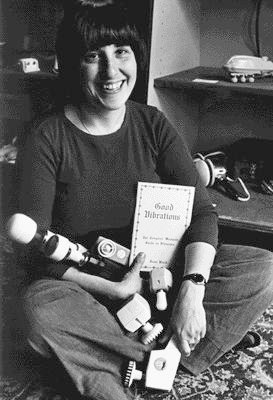 A few years later, Good Vibrations’ founder Joani Blank had written and published her first book, Good Vibrations (its little-known subtitle is “Being a Treatise on the Use of Machines in the Indolent Indulgence of Erotic Pleasure-Seeking Together with Important Hints on the Acquisition, Care, and Utilization of Said Machines and Much More about the Art and Science of Buzzing Off,” and she wrote it in calligraphy — it was the 1970s). After founding Down There Press in 1975, she created the Good Vibrations store in 1977 — and of the few products she felt were of sufficiently good quality to carry, the Magic Wand held pride of place. Before she got a distribution deal she could count on, word has it that she would make periodic trips to SF’s Japantown and return laden with boxed Magic Wands — the Cadillac of vibrators!

Susie later turned that idea about erotica into the game-changing Herotica franchise, and I like to think a large proportion of it was powered by Magic Wand — I know my stories were.

Now the original Magic Wand has been repackaged (and we’re no longer calling it the Hitachi, because these days “Hitachi” means “TV,” “rice cooker,” “earth mover,” “satellite” — you see, the term is no longer specific enough!). And many other companies have sold knock-off versions over the last few years. But the Magic Wand is still the original item that launched Dodson’s pro-masturbation career, the women’s sex shop revolution (including our very own Good Vibrations), and a million zillion orgasms!