The Struggle for Sex Positivity at Sex Week

I just returned from Sex Week at the University of Tennessee, and all I can say is: wow. Before I arrived, I knew all about last year’s de-funding debacle and this year’s continued controversy, which included the state legislature passing an official resolution that condemned Sex Week’s student organizers for organizing the event as well as further threats to cut university funding if Sex Week went on. In one poll, 59% of people said Sex Week should be cancelled. I read the Concerned Women of America’s terrifying press release (favorite quote: “The F.B.I. field office has been notified of planned illegal distribution of pornographic material to minors on campus”) and knew that there wasn’t exactly going to be a marching band to celebrate my arrival. I’ve had students and community members protest my college appearances before, so I was ready for whatever push-back might come my way. I wasn’t prepared for what I discovered: a sexual culture so steeped in shame and stigma that students are afraid to be seen at Sex Week events. 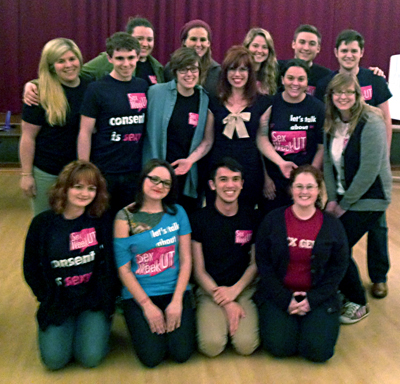 The scene when I arrived on campus Tuesday night was familiar: student volunteers scurried around preparing for that night’s lecture, “Sexploration: Boys, Girls, I Can’t Help It,” by Megan Andelloux. They wore navy blue and turquoise t-shirts that read “UT Sex Week: Let’s Talk About It” in pink and white lettering. Several hundred students attended Megan’s talk about the fluid nature of sexual attraction and orientation, eagerly asking questions and sharing comments throughout it. I was pleasantly surprised to find that those who attended were open and ready to discuss some tough topics.

But when I had the chance to sit down with the co-founders of Sexual Empowerment and Awareness at Tennessee (SEAT) and Sex Week, seniors Brianna Rader and Jacob Clark, I found out just how much resistance there is to sex education programming on campus. Both of them told me they’ve lost friends over Sex Week. “Having an open dialogue about sexuality on campus is very rare. Students have never been given that opportunity, and we are taught from a young age that it’s a private subject for after marriage,” says Brianna. “When given that framework, it’s difficult to break those boundaries.”

“Some students think Sex Week is a waste of time and money; they are usually very sex negative. Those are the students I wish I could reach out to more,” says Jacob. People say there is no such thing as bad publicity, but in Tennessee, they’re wrong. All the attention both last year (the first annual Sex Week) and this year—including local media coverage and student newspaper editorials—actually deterred students from attending the events. It doesn’t help that at every event, a student’s ID card is swiped (in order to officially record attendance to make sure funding is equitable and reflects the popularity of events) which seems like a questionable data gathering method at best and an illegal invasion of privacy at worst (hello, ACLU, I’m looking at you). According to that data, the most well-attended talk overall was “Sex and Religion,” a roundtable of pastors and faith leaders who answered anonymous questions about sex. This sounds great on paper, but in practice, not a single progressive, liberal leader was on the panel. Perhaps this shouldn’t be surprising given that I was in Tennessee, where it’s technically illegal for students to hold hands in school and “creampie” is the most popular porn search term. Knoxville ranked as the #1 most “bible-minded” city in America; according to research, 52% of the population “report reading the Bible in a typical week and strongly assert the Bible is accurate in the principles it teaches.” In a strange turn of events, my Sex Week lecture about feminist pornography was scheduled on Ash Wednesday. Bravo to the students who showed up with smudged foreheads to prove that you can be religious and sexual—it’s not one or the other.

When I asked various students why they thought their peers wouldn’t come to a Sex Week event, their answers revealed just how deeply sex-negative attitudes have permeated the student population:

If I was seen at one of those events, people would think I’m a slut.

I’d be way too embarrassed to attend a lecture about sex.

I already know all that stuff, why do I need to go to a presentation on it?

Sex Week isn’t embraced by the community, I’d be afraid to go, it’s seen as rebellious.

This re-cast the entire event as much more radical than I thought before I arrived on campus. The act of simply wearing a Sex Week t-shirt or openly attending Sex Week events opened students up to criticism and stigma from their peers. You can only imagine what it means to be the public face of Sex Week—imagine if your chosen extracurricular activity had such far-reaching implications? Indeed, this is one of the only Sex Weeks that happens in the South and it is the ONLY one at a public university in the South.

I want to sincerely thank the students (along with some fabulous members of the Knoxville community) who did attend my events; I hope you got something from my talks and they inspire you to learn more. In both sessions, I got more questions than I had time to answer, which signals that there is a great need for presentations like mine. I was glad to give away free samples of Please Liquid Lube and Please Gel Lube from Good Vibrations and one lucky winner went home with a Door Jam Sex Sling from Sportsheets for asking my favorite question of the night. My message to folks who missed my talks and the other really wonderful Sex Week presentations: do not let silence and shame keep you from learning about your body and sexual health and pleasure. You deserve non-judgmental comprehensive sex education that includes multiple perspectives and discussions of risks and rewards. Please consider stepping outside your comfort zone and attending Sex Week next year—you might be surprised what you learn.

I also want to recommend some great sex education resources:

What You Really, Really Want

The Good Vibrations Guide to Sex

The Ultimate Guide to Orgasm for Women

The Expert Guide to Female Orgasms

Tristan Taormino is an author and sex educator. She lectures at top colleges and universities throughout North America. She gave two lectures at UT Sex Week on March 5 and 6, and her appearance was co-sponsored by Good Vibrations.