It’s been another peripatetic season for your traveling sexologist, and two of my trips were especially noteworthy. Ride along as I visit the White House (well, next door, anyway) and São Paulo, Brazil! While both trips came about via different sides of my life and work, they had interesting issues in common, too. Today—Washington, DC. Stay tuned for São Paulo!

Bisexuals Descend on US Capitol!

In September I traveled to Washington, DC, there for a meeting of bisexual activists on the eve of Bi Visibility Day. This bisexual “national holiday” (part of Bisexual Awareness Week) came about largely because so often in the past decades the LGBT movement has forgotten to invite or mention bisexuals, so bi folks stepped up to speak up. We were at (well, very near) the White House for a policy summit, the second ever of its kind, which mixed activists from around the country with people who work in various relevant parts of the administration. Panels and mind-melds ensured, largely fueled by some recent research that looks at the human cost of all the invisibility and discrimination: Bisexual women are at very high risk of sexual harassment; bisexual people can have a hard time with employment and housing discrimination; bisexuals have many stress-related health problems, and then of course HIV… (they were blaming that on us for a while, remember?). Being told over and over that you don’t exist is pretty trying! 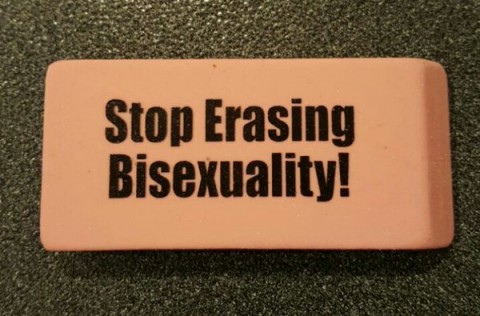 It was an inspiring and sobering gathering, the latter because of all those statistics that made it so important for us to confab with members of the administration to begin with. For me, though, there were two takeaways that I have spent much brainpower on since September: Unlike the way it goes in the outside world, where practically the only thing people talk about re: bisexuals is our sex lives and their fantasies about our arcane relationship structures (only occasionally true), this was a discussion of all the other things that impact bi people. Coming as I do from the part of the community that embraces sexual discourse and creative relationships, it was an interesting omission—probably necessary (the rest of the movement moved forward in the mainstream by talking about sex less, after all), but it definitely left me thoughtful.

And then there was the matter of nomenclature. So many (especially younger) people are concerned that the word bisexual encourages trans invisibility that apparently many people who might be termed behaviorally bisexual don’t use the term to describe themselves—not because they’re in the closet, but because they choose to call themselves “queer” or”pansexual” or something else instead of bisexual. The bisexual community certainly did embrace the term queer fairly early on, partly because it smudges the borders between orientations and lets bi/queer folks live more comfortably in the larger LGBTQ community. I’ve been a booster of the word for this reason, in fact; my very first essay was called “The Queer in Me” (published in 1989 in Bi Any Other Name, which was just re-issued as an ebook this year). However, “bi” does mean “two,” and the notion that there are just two genders seems, these days, hella-20th century. So the bi visibility movement has been using the term “bi-plus”: attracted to two or more genders. This term hasn’t gotten full traction yet—Googling it doesn’t yield immediate and useful results—but the entire discussion is very worthwhile, especially at this time of increasing trans visibility and gender diversity.

Let me just go on a teeny rant about this issue. In the first place, there certainly remain many trans men and women who feel pretty binary about gender—while there are definitely some who want to get off the gender binary bus, many simply want to live well in the gender identity that has always been their reality, even if society did not embrace it. Pretending that those trans folk are actually genderqueer or in the middle of the gender spectrum does them a disservice; generally that isn’t how they would choose to identify. In the second place, trans people and bisexual people have also often been strong allies and partners. The bisexual community is not the main place where transphobia flows freely; monosexual people (those who only desire members of one gender) have done a much more thorough job of sowing those seeds. (And I don’t mean all monosexuals, so don’t get cranky if you‘re not bi and you are a trans ally. I don’t mean you. I mean all those other transphobic monosexuals.)

My overall take on this: I’m happy to add more options to those we have to describe ourselves; this kind of diversity encourages us to stand up and be seen in the big, bright spectrum we are. But it’s too early to retire the word “bisexual,” and I’ll tell you why: Because biphobia still exists; because of all those terrible statistics we grappled with at the Washington DC meeting. Anyone who chooses not to acknowledge bisexuality (whether or not they’ve been attracted to members of more than one gender) supports bisexual invisibility; they don’t fix bisexual peoples’ problems, they simply wallpaper over all those issues and leave bi people feeling they have a less-robust and supportive community.

OK, rant over, except one postscript: you can be bi AND queer AND pan AND more, all at the same time. People, we just invented about a thousand new sexual identities and pronouns in the past century. Don’t think you have to choose only one of them to describe your scintillating diverse selves!

Big thanks to BiNet USA for masterfully organizing and herding all those bisexuals, and to HRC for its support of these events and my participation—their bisexual-friendly travel agent is a master of the craft.

One delightful outcome of the trip was running into so many of my longtime bi friends and activist buddies—shout-out to my pals from Minneapolis, America’s Capital of Bisexuals! And I met many new friends there as well. One project which is doing a wonderful job humanizing bisexual diversity and visibility is Nicole Kristal’s #StillBisexual YouTube channel; I met with her earlier this month to share my story.