The Tumblr announcement came the same week as a decision by Facebook to police suggestive content was announced. “Mentioning sexual roles, sex positions, fetish scenarios, sexual preference/sexual partner preference…” as well as other content is banned under its updated Terms of Service. I don’t know about you, but I can’t do my job (much less have fun on the weekend) if I can’t talk about that stuff. There’s debate online and off as to whether the Tumblr ban was inspired by SESTA/FOSTA, but broad agreement that Facebook’s ban most likely was. 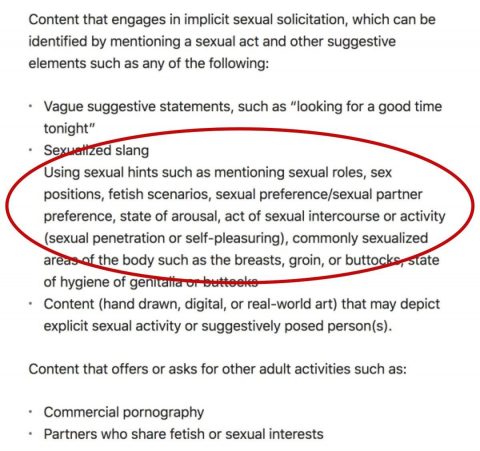 SESTA/FOSTA, which stands for Stop Enabling Sex Traffickers Act & Fight Online Sex Trafficking Act, is a law passed in April 2018 that seeks to make internet platforms responsible for content they host that allows human trafficking to be carried out via these websites on these platforms. There are already laws against trafficking and many of its constituent activities. But the law passed nonetheless, and immediately began to impact the internet. No one in the adult industry thinks that trafficking is OK, but beyond that, it immediately became clear that the people with power—the government, the platforms themselves—could not tell the difference between coerced/forced sex (which is the component of trafficking SESTA/FOSTA really tries to go after) and consent-based sex work. From webcamming to prostitution, this law, and the bans that follow, hits sex workers especially hard.

How? Aside from street-based prostitution, these days most sex workers’ client- and fan-seeking happens online. Via platforms like Tumblr and many others, sex workers can put themselves out there, showcase their creative work, meet and–-most importantly—screen clients, and carry on with some level of safety. That’s at risk every time their community, and communications, are disrupted by bans like these. Many such disruptions have happened, across many platforms, since April, and sex work has gotten less safe.

We stand with the sex workers who are getting caught in the political crossfire as activists and politicians who do not know or care about their lives legislate away their hard-won online space and their safety.

It is bad enough that US (and many other countries’) politics is currently conducted in a way that disenfranchises and dismisses the interests and perspectives of many groups of people. Three of the communities hardest hit by this weaponized political polarization–the LGBTQ community, women, and sex workers—are among those most impacted by Tumblr’s policy change. (And it adds unconscionable insult to injury that Tumblr’s “go clean or go home” policy is being rolled out today of all days–on December 17, the International Day to End Violence Against Sex Workers.)

Beyond the sorry state of our politics, we are outraged that Internet platforms, from social media to search engines, seem more prone these days to accept content steeped in hate and intolerance than that inspired by a playful or searching interest in sex. They call the former “free speech” while damning the latter as harmful—when in reality, it’s the other way around. Some of the world’s largest—and certainly most powerful—companies are shifting the cultural ground under everyone’s feet. Movements and communities that have grown for decades are under enormous pressure as search engines and social media companies put a heavy thumb on the scale. This is unacceptable—and dangerous. And it’s bad business for companies to pull the rug out from under their own users and make individuals’ and communities’ existence more precarious—Tumblr itself might not be as huge as some, but it’s owned by Verizon, and no one argues that Facebook and Google don’t control vast swaths of Internet territory. But these businesses will get away with exiling sexuality-based cultures if we don’t speak up. We need to loudly say that we don’t want the platforms we use to engineer the sexuality community—and ordinary people who are just curious or charmed by the content they generate—off to the margins.

We stand with the sexy and sex-positive content creators of Tumblr.

Good Vibrations is part of the Free Speech Coalition (disclosure: Staff Sexologist Carol Queen PhD is a past FSC board member, and owner Joel Kaminsky currently sits on their board). Their statement on the Tumblr ban is eloquent: