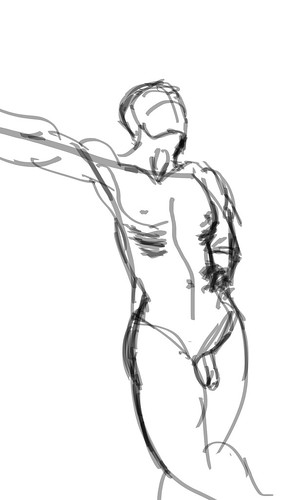 “Artist’s model needed, the ad read. “Must be male, comfortable with nudity, being still for long periods of time. Compensation offered for your time.

It was a tough job market, and Mark needed to make a bit of cash, and quickly. He was skimming the ads on Craigslist, hoping to make a little under the table while he looked for work, and this job caught his eye. He had done a bit of modeling for sketching before, in university a year ago, and this seemed like an easy way to put something towards his rent. He met the artist, a 50 year old woman named Judith, for coffee, chatting a bit before setting a date for him to come to her studio for the session. She had been cool, professional, telling him what the compensation would be and what he would be expected to do. Judith had left the cafe without asking his name.

Now he was standing there, his muscles twitching under the strain of staying still, while Judith brushed wisps of silver hair out of her face. Mark watched out of the corner of his eye as she expertly put pencil to paper, her eyes flicking to his body and back to the paper again. He felt exposed, a living statue posed for her purposes and then ignored. He could feel her gaze slide over his muscular thighs, his slightly rounded belly, his hairy chest, and shivered. It felt strangely erotic to be made both the center of attention and yet completely inactive, a piece of furniture not unlike her easel or the stool she sat on.

Judith enjoyed watching the 22 year old shift every so slightly under her gaze. As her pencil marked the slight pout of his lips, the broadness of his shoulders, she found herself wet. There was something about the male form, so accustomed to being active and in charge, submitting to the psychological bondage of modeling. She adjusted herself in her seat, her round thighs clamping together tightly, her clit throbbing. How beautiful he was, how self-conscious as he tried to please her! Certain he couldn’t really see, she let one hand languidly slide over her soft hips and under her skirt, the other hand still furiously sketching. As her fingers found their way to her cunt she sighed, gently, not enough to arouse his suspicion. Judith loved this game, loved the power she had.

Watching intently as Mark trembled with the effort of staying still, she spread her pussy lips, her fingertips stroking her clit with a firmness not unlike her pencil stroking the paper. Judith inhaled deeply as she circled the pink nub, feeling her body become taut with expectation and desire. Mark heard her intake of breath, and his eyes flickered over to her, but only saw the clipboard and her dark eyes, swirling with energy. Taking her arousal as a passion for her work, he let his gaze go back to the wall, covered with framed sketches of other men. Judith didn’t seem to have a type- young, old, pudgy, fit, they all posed, outlined in charcoal and pen. He wondered why she sketched so much- if she sold her work, she hadn’t said anything about it.

As her hand played within her slippery folds she bit her lip to avoid letting a moan escape. Judith could feel her orgasm building, slowly but powerfully. She didn’t know what it was about sketching men, but she loved the objectification of the models, the way they were just there, unresponsive, unknowing. Their stillness undid her. Each sketch was a reflection of her desire, a moment in time, a burst of ownership. She never stopped tracing his contours, not even when she came, heat flushing her cheeks as she shuddered.

He never saw the sketches, never knew what pleasure his body had given her. She just handed him the envelope with his payment, thanked him, and showed him the door.

Judith never asked his name- it didn’t matter. There would be other boys.