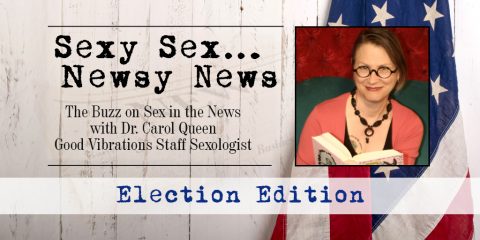 I’m far from sure that anyone out there–short of Newt Gingrich, or more precisely the fantasy Megyn Kelly that lives in his brain—thinks this election year has actually been sexy. Full of sex, sure. Overamped on sex, even, some days. Newsy, well, of course. But aside from the obvious gender difference between the two candidates—and BOY, is it obvious!—the 2015-16 election cycle has given us so many sex referents that it’s finally crystal clear that sex is a different and more public issue in the 21st century than it was in the 20th. Like the contrast between Miss Kitty on Gunsmoke and Dolores on Westworld, is what I’m saying. And the most striking take-away, to me, from the circus so far is that issues that were up for young feminists in the 1970s—the glass ceiling, sexual harassment, rape and assault—have been made so mainstream that virtually everyone feels pressured to have an opinion. And not since Larry Flynt ran for president has the person of a presidential candidate been so inseparable from questions of sex. (In fact, I am feeling downright nostalgic for Larry right now.)

It’s not necessarily easy to get women all across the political spectrum to relate as women. This has been one of challenges of feminism all along: some women don’t want to be ID’ed by gender, and not all women agree about what’s good for women in the cultural and political realms. But as news from all sides of the political spectrum has pointed out in this election cycle, most females, from the evangelical ladies to the roaring bulldaggers, really really would prefer not to be considered pussy-grabbing fodder by random men, no matter how famous. This has been especially clear since the revelation of Trump’s Access Hollywood “grab ‘em by the pussy” tape, and even those women who have been hit on in less physically overt ways have an issue with it. And this is a surprise to whom? The men who truly think this is what women expect and desire? Are there actually any guys this naive? As torrents of tweets (and not a few op-eds, Facebook posts and press conferences) have pointed out, most women have some experience with unwanted sexualization and touch, and it is all too easy to imagine the scenarios the Trump accusers have sketched out for voters to consider. This may be THE primary reason there’s a gender gap among voters.

Male voters have either behaved this way themselves and don’t want this to be top-of-the-fold in election news coverage, or they have moms, wives, girlfriends, sisters, aunts, daughters, colleagues and friends in their lives and would prefer to imagine no pussy-grabbing of any of them. Some of those latter guys have stepped up as articulate advocates. Others simply cannot grasp how common this is. But it would be a good idea for them to tune in to this radio frequency, because if there is to be a truly positive spin on any of this, it’s what a powerful “Get it all out and heal this shit” moment vis-a-vis rape culture this presidential campaign has been.

Oh, and just in case you are feeling irritable because I’ve gendered it this way: I’m riffing off the news media, remember. This is, in 2016, now fully mainstream discourse. And the media hasn’t really brought it up enough, but I’ll just acknowledge: Women can behave this way to women (it’s happened to me), men to men, gender non-binary folk may have their own experiences of it… and plenty of people, of course, Just. Would. Never.

Character and the Question of Consent

Perhaps the most extraordinary spin of the “Pussygrab-Gate” discussion has been the right-wing women stepping up for Trump who say they believe him and insist that his real mistake was using such salty verbiage. Men have said this, too, but I’ve noticed the female Trump surrogates on this talking point more than others. “Yes,” they seem to be saying, “the culture has gotten shockingly bad! Such language!” I’d like to be a fly on the wall as pundits pace up and down in their offices, swearing loudly about having to write a column simply to point out that the problem is the behavior. There’ve been a ton of these, and rightly so.

But! We can always count on Rush Limbaugh to boil it down! “You know what the magic word, the only thing that matters in American sexual mores today is? One thing,” he says. “You can do anything — the left will promote and understand and tolerate anything — as long as there is one element. Do you know what it is? Consent. If there is consent on both or all three or all four, however many are involved in the sex act, it’s perfectly fine. Whatever it is. But if the left ever senses and smells that there’s no consent in part of the equation then here come the rape police. But consent is the magic key to the left.”

This is, in fact, the heart of the argument that pussy-grabbing is not a character trait we’d like to endorse in our leaders. For heavens’ sake, it’s related to why Bill-Clinton-haters are still fulminating! (Though a good many of his transgressions are understood to be consensual.) But if you really read the tea leaves here, the message is, “It’s WAY better to engage in a normal act non-consensually than to do some pervy thing that everyone enthusiastically consents to.” This is the point I realized we were in the Upside-Down and began tweeting, “#HelpElevenHelp!”

I would also like to remind my young lady-friends not to be alone with Rush Limbaugh, either.

Would YOU have bet that the October Surprise would involve Carlos Danger’s hard-on? Good lord. Has Nate Silver reported what the odds were on that twist?

Unless Putin introduced Melania to Trump and she’s secretly Assange’s cousin, I just can’t figure out what on earth turned WikiLeaks from a cause celebre for lefties to getting love from Trumpsters and the alt- (and sometimes lately the old-school) right. Did NOT see that business coming!

Is Megyn Kelly Really a Valkyrie*?

Really nothing in the Sexy-NewsyVerse has been more bemusing—and frankly inspiring, in its own way—than the rise of Megyn Kelly as fierce women’s advocate. The news that she went toe-to-toe with radical-right power-monger Roger Ailes and won is happy enough; that she wiped up the floor with Gingrich is enough to make me feel all live-and-let-live about all her perspectives that I’d probably find deeply upsetting if we were on a debate stage. Instead, I just get to crown her my special Miss Schadenfreude USA and enjoy. See, Mr. Trump, we can ALL own our own pageants!

Here’s a modest proposal. Perhaps we should pack the next administration with the survivors of sexual malfeasance*. Those who have stepped forward recently seem to have a lot of dignity, and they certainly have courage. (To be fair, this has been going on since long before the run-up to this election. I’m thinking of the young men who stepped forward about Sandusky and the SNAP folks [Survivors’ Network of those Abused by Priests].) We at Good Vibrations are especially thrilled to see our inspirational friend Jessica Drake step up. In her chunky Rachel Maddow glasses, with Gloria Allred: that should be a Ms. Magazine cover photo. Jessica is elegant, whip-smart, and thoughtful, which is not how I would describe the candidate whom New York feminist protesters like to call “Cheeto Voldemort.”

*And this would not, of course, rule out Hillary; as many have pointed out since Carlos Danger re-reared his little head, Hill has been putting up with malfeasance for quite some time.

Tip o’ the Quill to the Press

I mentioned 1970s feminism above, and let me spell out that the astonishing thing about 2016 is not that feminist pundits are writing op-eds or that their discourse and points of view are radical; there’s little in the mix today that was not said forty years ago. But in those days, it was generally found in the alternative press. Now? Thanks to the blend of can’t-look-away topicality (it’s the freakin’ presidential race!) and the cultural changes that have ensued (you’re welcome, I have spent much of the past four decades trying to make it easier to bring sexual discourse out of the shadows, and I’ve had a lot of company and stand on the shoulders of giants), now this discussion could scarcely be any more mainstream. I have hundreds and hundreds of URLs cached, dating back to that first Megyn Kelly-moderated debate when Trump got triggered by her “What kind of dick keeps taking potshots at Rosie O’Donnell?” question. I literally have links to stories from left, right, center, and every other direction (the evangelical press! I’m not kidding!), spelling out the Sexy Newsy history of the most unexpected political campaign since Victoria Woodhull ran for the office she couldn’t even vote for. But if there is one media outlet to call out for getting there early and never, ever letting up on the coverage, it’s the Washington Post. I’ve had my gripes with Amazon, but WaPo is the jewel in Jeff Bezos’ crown this year.

I’ll see you after the election for a recap of 2016, if I can summon the strength to cast a sweeping gaze over the weirdest year I have ever experienced. Stay safe! Don’t forget to vote!