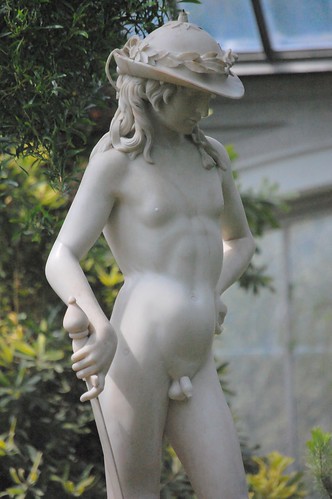 Sex worker and writer Antonia Crane recently shared a moment with anti-sex work writer Cheryl Strayed, discussing their viewpoints and what led them to regard sex work as they do. Describing her clients, Crane said, “Men really want to learn how to please women and our multi-faceted feminism has left them very confused about how to do that. I don’t think men want to buy women, I think they want to feel desired by them.” I couldn’t have said it better myself, though I wouldn’t be specifically saying it in defense of sex work.

I’ve encountered the male desire to be desired hundreds of times. When I first got started in sex work, it used to annoy me when a client would stress how much he wanted me to enjoy the session. It felt to me that it was really up to them. All they had to do was be punctual, clean, and polite. Were they implying that I didn’t like what I did? Were they asking for sex? No and no–or at least, no and maybe.

Men are rarely objectified by our society and when they are, it’s often either by cookie-cutter teens who eschew anything even remotely threatening or by women who are more interested in interviews painting them as good fathers than in sultry pictures. Attractive males are supposed to be feminine, but not effeminate. Beards have recently made a bit of a comeback–thank god–but most men and women still think male beauty means an over-muscled, hairless body and a face almost completely devoid of secondary sexual characteristics. It’s hard for me to get really hot and bothered over a Ken doll.

Many guys who see sex workers just want to feel sexy, even more than they want the sex worker to be sexy. This might be expected from the crossdressing and clothed female, nude male (CFNM) clients that I see, but it’s almost ubiquitous across the range of fetishists, submissives, dominants, and kinksters that I spend my professional time with. Now that I understand it, I find it interesting and endearing rather than annoying.

What helped me come to understand what my clients were trying to say, though they lacked the necessary vocabulary or forthrightness, was talking to my husband about his past relationships. Evidently it’s unusual that I tell him he has pretty eyes, an ass like Michaelangelo’s David, and a fantastic penis. He’d never experienced it from a single one of the other women he’d been with. Conversing with my clients confirmed that this was that they wanted when they said, over and over again, that they wanted me to enjoy our time together. Though I don’t offer any actual sex in my live sessions, they just wanted to feel desired by a woman.

Men also fantasize about women who are willing to pay for sexual or fetish encounters. Every now and then, on every sex work-related forum I’ve been to, someone asks if single women are ever clients. A few clients have asked if I have any female clients who would be up for a double session. I don’t think this is just a way to try to get another girl in the room for free. It seems to grow from a desire to connect with a woman as a sexual peer, though I’m afraid it’s one that will go unfulfilled unless there are some major societal changes. A woman comfortable sharing a sexual experience with an unknown man is most likely a sex worker herself and, if she is paying for my services, is most likely a lesbian and not interested in bringing a man into the equation.

I completely understand the desire for a more complete partner, one with a comparable sex drive who tells her partner that she finds him attractive. The only part of the male that we really objectify is the actual penis and while I think penises are great, I’d be pretty pissed if I could only feel desired based on the tightness of my vagina or the size of my breasts.

I’m not glorifying the societal objectification of women (or anyone) in any way, but I am saying that sometimes it’s nice to feel desired as a package. There are different ways that women can be considered attractive. Despite constantly being told that men are only interested in thin, busty blonds under 25, I can’t help but notice how well full-figured, small-chested, non-Caucasian, and older women do as sex workers. Male sexuality is really more diverse than that and so is female sexuality.

For example, I like tall, husky men with beards and glasses, like my husband. You won’t find a guy like that on the cover of Filament or Playgirl. I can more easily sexualize a guy if I feel he is real and approachable, a guy who will spend more time with me than with his personal trainer.

What prompted all this was receiving a copy of 50s Fashion: Vintage Fasion and Beauty Ads, compiled by Jim Heimann. Flipping through it, I shook my head at the ads promising to lighten the complexions of African women, eagerly scanned eyeglass styles, and was surprised by the menswear ads. There were still the basic ads promising to turn a guy into a sex god for faceless hordes of women, not unlike modern Axe commercials, but there were also ads that objectified men to the point that they would inspire riots if applied to modern women.

The ads are playful and lighthearted, but often relegate the male to the status of a sex object to be adorned for the female’s viewing pleasure. My favorite shows a man from the navel down, hands on hips, legs spread. He’s wearing pajama bottoms while his wife, or at least some woman, sits on the floor wearing the pajama top. If the man’s pose didn’t make it clear enough what we’re supposed to notice, the woman is staring right at it. And by it, I mean it. The boldness of the ad really shocked me. The male, not the female, is the faceless, decapitated sex kitten, while the female is the over-sexed objectifier. And it’s meant to be taken 100% seriously.

Another shows a man making his way through a theater aisle while being ogled not only by the woman immediately in front of him, but by a woman in the balcony with a pair of binoculars. If nothing else, the clear sexual appetites of the women are satisfying to behold.

Yet another shows a female tucked into a corner with a telephone to her ear, gazing up at bubbles featuring men with hearts floating around them. She’s clearly taking her pick, judging them by the shirts the ad is selling. The ad makes me think more of phone sex than shirting.

There are various other examples, but those three are my favorite and perhaps the strongest. I’m not saying that societal sexualization of any gender is a good thing, but I can’t help but feel we’ve lost something, whether man, woman, queer, or whatever, by loosing this playful, open sexuality. Today’s ads are more sultry than fun and I would love to see sex represented as fun again. I think a lot of my clients would, too. And while I don’t particularly like being yelled or whistled at as I walk down the street (and, at eight months pregnant it’s still freaking happening; can’t a girl get a break?), I would feel a lot better about it if I heard the occasional female-to-male cat call, too.

Most of us like to feel sexualized by our partners. It’s why the Madonna-Whore Complex is such a bummer. Being sexualized by society as a whole can be dehumanizing, but society is responsible for giving its members the framework to be sexual, even in private, and I would love to see it be more okay for women to express their carnal side. I think the menfolk would enjoy it, too!