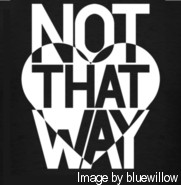 It’s no secret that sex can happen between people who aren’t in love.

Sex can even be great between people who aren’t in love.

But is the opposite true? Can love exist without sex? Sadly, many say no. It’s a widespread belief that people who aren’t sexually attracted to each other can’t be in love.

Okay, sure, you love your mom, you love your kids, you love your dog, you love your job or your hobbies or a good cheeseburger. We understand that a positive emotion we call love can exist without involving sexuality. But sometimes, when a person describes a romantic relationship existing without the sexual element, suddenly that person’s judgment is called into question.

No way. If you’re not having sex, it’s puppy love/immature love/something dysfunctional. You are wrong about what you feel. End of story.

That’s right. For a relationship to be considered mature, healthy, or REAL, some people believe mutual sexual attraction must arise between the participating members. This assumption needs to be debunked. Because desire for sex is not a prerequisite for romance, any more than love’s presence or absence defines whether sex has happened.

There exists a small but significant portion of the population that identifies as asexual. This, for those not up on their terminology, refers to those who don’t experience sexual attraction. But within that group, there are further subdivisions—notably, those who are romantically inclined and those who are not. There are heteroromantic, homoromantic, biromantic, and panromantic asexuals out there who experience non-sexual forms of attraction toward potential partners. The practical upshot of this distinction is that some asexuals, despite not feeling sexual attraction to their partners, nevertheless do want to have satisfying romantic relationships which function the same as anybody else’s . . . that is, everywhere but the bedroom.

Any asexual who has expressed the wish to find a companion will have heard the protests about how this can’t happen. If a person has mature, full love, say some, then sexual attraction will develop, and if it does not then that person’s love is broken or underdeveloped or there’s something physically or mentally wrong, even if lack of sexual attraction is the only so-called symptom. But who decided that, exactly? Who made the rule that “real” love has to involve sexual attraction? Who did, in fact, write the book of love?

People outside this equation do not get to say what feelings are possible for an asexual. Everyone can help spread understanding by acknowledging that no one is qualified to grant or deny legitimacy for another person’s feelings. In the spirit of sharing an appreciation for sex and celebrating its purpose, care must be taken to avoid putting negative spin on a positive concept. Sexuality is not a religion, and it’s not possible to convert a “nonbeliever.” People who experience sexual attraction and asexual people can coexist and respect each other’s way of life without making claims of exclusivity over whose relationships count.

Except for asexuals’ lack of sexual attraction to the people they love, all their other feelings are as varied and intense as those of any traditionally sexual person. For most people, love and sex are often intertwined, and as these two feelings/experiences bounce off one another to enhance and affect their experiences, they sometimes feel that one is necessary for the other to work properly. This is not the case for everyone. Obviously sex can happen without love, and though some who have had sex without the love aspect might say the experience is superior when both are operating, no one doubts that sex can and does happen without love and that it is “real” sex.

However, things break down a bit with asexuals. Because they do not experience sexual attraction, the romantic attraction that does crop up becomes an independent experience, which may look odd from an outside perspective. If it’s real, and intense, and compelling, then why doesn’t it inspire the feelings most people expect when they feel it themselves? Because for asexuals, romance generally isn’t intertwined with sexuality.

It’s important to recognize that romantic attraction does not depend on sex. Doubting that love can exist for asexuals suggests that all people must express love the same way. It’s like saying a tailless dog is never happy based on a belief that all dogs wag their tails if they’re happy. For asexuals, attraction in a sexual way is just not in the equation; like the tailless dog, it’s just not there to wag. Other important types of attraction can indeed crop up independently in asexuals’ relationships, and these elements can be intense, deep, and multifaceted. Romantic attraction without sexual attraction is the way a romantic asexual operates. And it’s every bit as compelling—and satisfying—when it happens.

Traditionally sexual people do not have the monopoly on defining all human relationships. We cannot keep insisting that without sexuality all non-familial love is therefore friendship. What’s wrong with calling it a friendship, then?

Because “just” appears in front of “friends” for that very reason.

Because if people didn’t believe sexual relationships automatically rank higher than non-sexual ones, we wouldn’t have the phrase “more than friends.” We wouldn’t refer to friendships as arrangements in which “there’s nothing between us.”

If most people can have “friends with benefits” without accepting that sex makes the relationship into a romance, it seems like special pleading to turn around and say asexuals’ notion about sexless love must be called into question. Asexual people need to be trusted to define whether their relationships are romantic.

There are many people out there who just don’t feel sexual attraction in response to loving their partners, and it is ignorant to dismiss the depth of their feelings based on any preconceived notions about what constitutes “real” love. If relationship participants are having sex and they say they’re in love, a knee-jerk response of “no you’re not!” would be very rare indeed, not to mention rude. For relationship participants involving one or more asexuals, that same knee-jerk response is standard, and many people wouldn’t consider it rude. We’re used to hearing it, and we’re used to being expected to defend our relationships’ legitimacy, and we’re used to being told our minds and hearts must not work right if our genitals don’t get involved. We should all recognize that an attitude adjustment is in order. Nobody has any business telling other people that they are not qualified to interpret their own feelings.

Sex can be a physical celebration of love, but what happens if doing so is not a person’s inclination? Some asexuals enjoy cuddling, kissing, and various forms of closeness, and there are even those who are willing to have sex for other reasons, but that is beyond the depth of this article. The point is that it’s unreasonable to exclude asexuals from consideration as competent, worthy relationship partners. It’s up to the individual as to whether people whose sexual desires are incompatible are willing to compromise to make it work, but whether an asexual is allowed to have a romance should not be in doubt. Romantic asexuals of all stripes should be able to use the phrase “significant other” without being told that their relationships are, for all intents and purposes, not significant where it counts.