A few weeks ago, I was inspired by a bunch of radical, sex positive undergraduate peer educators. They made me remember what is at the heart of my politics, why I became a sex educator and the way that sex is one of the most important battlegrounds for justice and change that’s out there. I hadn’t experienced that in a long time. At a time in my life where I feel the pressures of running a small business as a woman with working class roots, I get reminders – both internal and external – that talking about sex may not be a smart business move. Never having found much resonance with the mainstream sex positive community in San Francisco (“Hello, Racism. Oh, you brought your friends, Misogyny & Fatphobia?”), I have no roots from which to extricate myself should I decide to maneuver away from sexuality anyway.

I spent the weekend in Arcata, California – home of Humboldt State University and the HSU Lumber Jacks – talking about sex and making floggers from electrical tape. In case you didn’t know, Arcata is kind of close to the Oregon border and people have pet yaks there. And they walk them. In the streets. One more random piece of trivia I just have to share: the guy who invented Sponge Bob Square Pants was a Humboldt State University dropout and spent his marijuana-hazed days creating stoner cartoons. The Krusty Krab is modeled after the local burger place, Star’s. OK, but back to the part about sex and flogger making, right?

I was invited to do the keynote for this year’s SexLand. This year’s theme was “peek-a-boo” and was a mixture of body positivity, sex positivity and burlesque. I arrived on Friday afternoon on the tiniest plane ever. Parts of SFO are under construction and I had to take what looked a lot like the Marriott shuttle around the airport to get to my terminal. I’d seen the tiny ass plane on my way in, and chuckled to myself, shaking my head and pitying the fool who’d have to fly in it. Well, pride goeth before the fall, my friends. Of course, I ended up on that plane and I watched as the tiny, unprotected propellers picked up speed. It reminded me of being in my mom’s mini-van with the 3.5 axles. It was an adventure though! It was me, my cheetah print rolly suitcase and 9 people from Eureka. And there was beverage service. I always like to be a little uppity with the beverage service and ask for mocktails. Oh no, no plebeian drinks for moi: “I’ll have a cranberry spritzer, please. Feel free to be heavy-handed with the cranberry, girl.”

Once we arrived I discovered that my intended escort had sprained her knee! I was naturally distraught and decided to cope by checking out the fine airport dining at Silver Lining. I was about to pre-order some clam chowder (sans bread bowl *side eye*) when my escort, Amee, a peer health educator at HSU, and Meera, the peer health education coordinator, showed up. Amee took me to my hotel, directed me to the best sandwich place in town (mmmm.. reuben!), and let me roam free while she and Meera headed to a ribbon-cutting ceremony. The evening’s keynote was well-attended and was entitled “There’s Glitter in Fatlandia: Fat Activism as an Unapologetic (& Hella Sexy) Queer Politic.” It’s mostly about glitter as a metaphor for art and resistance and revolution and freedom. I shared with them some of the startling statistics on feelings of regret and shame among American teens as compared to European teens. Just to give you an idea, according to a New York Times blog dated November 5, 2010:

“The age at which Europeans and Americans first have sex is the same — 17, on average, on both sides of the Atlantic. The percentage who use birth control from the start? In Holland it’s 64 percent and in the United States it’s 26 percent. The percentage who have regrets about their first time, wishing they had waited: 63 percent of boys and 69 percent of girls in the United States, and only 5 percent of boys and 12 percent of girls in the Netherlands. Teen pregnancy rates: three to six times higher here than in Western Europe. S.T.D. rates: 20 to 30 times higher here than Holland. H.I.V. rate? Theirs is six times lower.” 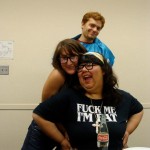 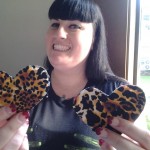 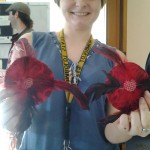 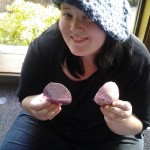 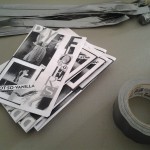 After signing about 20 copies of Hot & Heavy: Fierce Fat Girls on Life, Love and Fashion, my hosts were gracious enough to take me to Don’s Donuts. I had milk and an old-fashioned (just in case you and I ever date, you need to know that old-fashioned is my die-hard, every-time, fail safe donut of choice), and I managed to make it back to the hotel in time to soak in the hot tub for as many as 17 minutes and then watch some Fatal Attractions on Animal Planet (oh my god why do people live with 7 lions in a small New Jersey apartment?). OK, here’s something else you need to know about me. When I stay at hotels something overtakes me: if television-watching were a communicable disease, like, I catch it every time. Without intervention, I will literally watch Fatal Attractions (which always seems to be running in marathon mode) until 6am and then panic, drink so much coffee I can’t stop narrating everything I’m doing and then, upon returning to my hotel after a day of hellaciousness, proceed to watch Fatal Attractions or some Matt Damon movie I’ve already seen 8 times again!

The next day is the big day. One of the campus’ buildings turns into a kind of sex carnival. I accidentally wander into a building that’s having an international heritage day, and almost get side tracked by the free hummus and injera, but I wrench myself free from the dolmas because I have to teach a burlesque class, dammit. The room is filled with burlesque enthusiasts and we proceed to pop it and drop it for more than an hour. They are SO good at looking like seasoned hotties! Then comes the pasty-making portion of the afternoon. Of course, I’m overly ambitious and rather than stick to the kind of pasties I DO know how to make, I decide to make patterns for stars and hearts without realizing that there’s some geometry (or maybe physics?) issues. Long story short, when you make a pastie you have to fold a part of the base over on itself to make a cone/raised bit. If you want a pastie to look like a 5 pointed star, you have to start out with a 6 pointed star! This was all too much for me. But thankfully there were chemistry (or maybe physics?) minded people in the room who worked it all out and the pasties that exited the room that day were just marvelous.

Then came the flogger making! I ended up deciding on making a tickler instead of a flogger (I dunno… it felt more true to my essence). All you need is a bit of dowel, and roll of electrical tape. There are many how-tos on the interwebz, but just in case you want to hear it from a totally inexperienced flogger craftswoman: You start by covering the bit of dowel in electrical tape and then you proceed to make twenty to thirty strips by folding the strips of tape in thirds such that there’s no sticky bits left exposed. And then you attach the strips to a longer strip of electrical tape, with about ¾ of an inch between them. Wrap the long strip around the dowel and then you can cut them down or stylize them with pointy tips (or even tape pennies into the ends if you and your boo are OK with potentially drawing some blood). Voila. Done.

A few hours later I was preparing to teach a boundaries workshop. The agenda included:

There was an amazing drag and burlesque show that followed. The MC was Lady TaTa and I spent most of the night screaming and clapping while drag kings like Justice Beaver and burlesque starlets of the Va Va Vixens entertained. I headed home the next day.

SexLand is exactly what it sounds like – an alternative world that exists in reality for a couple of days, and in my heart for much, much longer. I know from my non-profit days that the statistics show that peer education is a highly effective tool for STD and pregnancy prevention, for college and high school retention, but what I wished for these SexLandians’ future was a lifetime of political education and community, a legacy of radicalism and a lot of really great sex.

Virgie Tovar is the author/editor of the upcoming fat positive anthology Hot &Heavy: Fierce Fat Girls on Life, Love and Fashion (Seal Press, November 2012). She holds an MA in Human Sexuality, is certified as a sex educator, and was voted Best Sex Writer by the Bay Area Guardian in 2008 for her first book, Destination DD: Adventures of a Brest Fetishist with 40DDs. After teaching Female Sexuality at UC Berkeley she went onto host The Virgie Show (CBS Radio) from 2007-2008. When she’s not teaching sexuality seminars or shimmying as her burlesque alter ego, Dulce de Lecherous, she is creating content for her video blog: Virgie Tovar’s Guide to Fat Girl Living. Virgie has been featured on Playboy Radio and Women’s Entertainment Television. She lives in San Francisco.