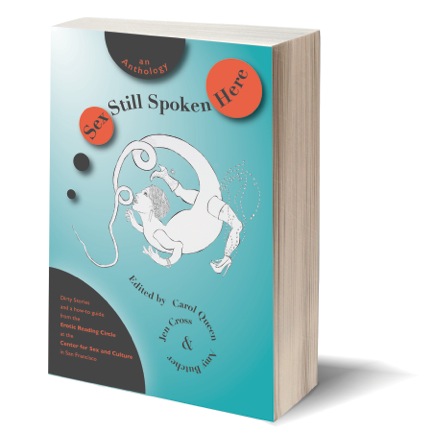 In the 1990s I inherited the ERC, which I facilitated for several years with my colleague Jack Davis. One night we were treated to an amazing story about a man, a woman, and a cigar—and I just want to state for the record that this happened before that situation with the president and his intern. It was such a well-written, breathtakingly creative story, I’m sure I said to Jack that very night, as we were putting chairs away, “We’ve gotta do a book!” In 1997 we released Sex Spoken Here (title contributed by Lawrence Schimel, with whom I’d edited Switch Hitters and PoMoSexuals).

Good Vibrations gave its blessing for the Circle to move to CSC. And there we’ve been ever since, almost every 4th Wednesday of every year since 2006, where a new crop of writers (and occasionally one of our old friends who was a denizen of the GV Circle years) meets regularly to read everything from novels- or memoirs-in-progress to stories to journal entries, blog posts, essays, poems, and—as I like to remind people is just as valuable as all these––some initial sexy ideas scrawled on a cocktail napkin.