Sex-Positive Trailblazer Good Vibrations Turns 40: A Look Back at the Revolutionary Retailer 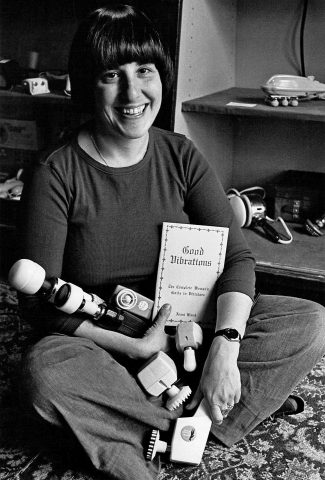 Forty years ago, in 1977, sex educator and therapist Joani Blank founded Good Vibrations in San Francisco, helping to jump-start the sex-toy retailing revolution. Blank bought a big carpet at a garage sale to brighten up the tiny space, hung macramé on the walls, and made a display shelf for the small collection of vibrators and books she was selling. There was no pornography, no lingerie, and no gimmicky novelty items. Her rent for the postage-stamp-sized space was $125 a month. She took out an ad in the newspaper and, according to her, sat there and waited for people to discover her cozy little vibrator shop.

Blank started Good Vibrations at a time when places for the average woman to comfortably buy vibrators were scarce. Conventional adult stores were not designed with female shoppers in mind; reputable mail-order businesses that sold so-called marital aids were few and far between; and women walking into a department store to buy a vibrating massager risked encountering a male clerk who might say, “Boy, you must really need it bad, sweetie pie.”

From the get-go, Blank was interested in serving what she referred to as various “sexual styles”—older people, younger people, single people, married people, lesbians, gays, and transgender customers; everyone from sex workers to suburban housewives. Good Vibrations adopted the tag line, “especially but not exclusively for women,” and Blank and her staff worked hard to make sure the store was a welcoming place for everyone, regardless of whether they had sex twice a year or twice a day.

There’s no way Blank could’ve known then that her sex-positive business model would become a source of inspiration for likeminded entrepreneurs who would eventually open similar stores of their own. She knew from her work as a sex therapist that there were very few places where people could go to ask questions and get accurate information about sex. She also knew that many women were not comfortable going into the stereotypical adult store to get their vibrators. Blank felt there needed to be a different kind of sex shop—a comfortable, friendly, and educationally focused store—that, as she put it, would “exploit people’s interest in sex rather than their anxiety about it.”

Although Good Vibrations wasn’t the first female-friendly vibrator business in the United States—Dell Williams founded Eve’s Garden in New York City in 1974, which initially operated as a mail-order business—it soon developed a national reputation as a clearinghouse for sexual information, becoming a standard bearer in an industry that, until recently, had few standards. Along the way, Blank infused the business with a noncompetitive ethos, happily sharing the company’s financial records and vendor lists with entrepreneurially minded interns who, in the early 1990s, would go on to found businesses of their own. Former employees of those businesses eventually started their own sex-toy stores, and Good Vibrations’ DNA continued to replicate, forming the basis of a growing, sex-positive diaspora of retailers, manufacturers, and sex educators. 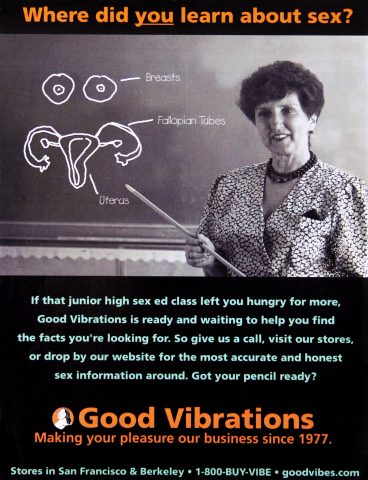 Over the years, Blank (who left the company in 1994) hired smart and capable employees—Susie Bright, Cathy Winks, Anne Semans, Carol Queen, and others—who helped expand her original vision beyond the geographical boundaries of San Francisco. The commitment on the part of Good Vibrations staff to spread the message of positive sexuality to as many people as possible took on a missionary zeal and spurred the growth of the company—and the wider market for sex toys—throughout the 1980s and 1990s. People thumbed through Good Vibrations’ mail-order catalogs, which went all over the world; they attended in-store after-hours educational programs; and, with the advent of Internet-based retailing, they eventually made their way to Good Vibrations’ online store.
In time, Good Vibrations alums, including author Susie Bright, who helped start On Our Backs magazine, Marilyn Bishara who founded silicone sex-toy manufacturer Vixen Creations, and queer pornographer Shine Louise Houston, would leave their marks on the broader culture as sex-positive writers, educators, manufacturers, and erotic filmmakers.

I first visited Good Vibrations in 1993. I had driven cross-country from Massachusetts, sleeping at rest stops along the way, and was eager to explore as much of sex-positive San Francisco as I could during the short time I was there. I had seen Good Vibrations’ ads in On Our Backs magazine and had read Susie Bright’s cheeky takes on sex toys in her column, Toys For Us.

Much has changed since 1977 when Joani Blank opened her small shop in the heart of San Francisco’s Mission District. Today, due largely to the success of Good Vibrations and its sister stores, we live in a world in which women and queer-friendly sex shops are increasingly the norm. The availability of how-to books about sex has exploded and references to sex toys abound in popular magazines. More and better-made sex toys exist than ever before and a growing number of sex-toy bloggers review what they see as the best and worst that the industry has to offer. There are now sex-related podcasts, sex educator boot camps, and even universities that offer courses on sex-toy design. 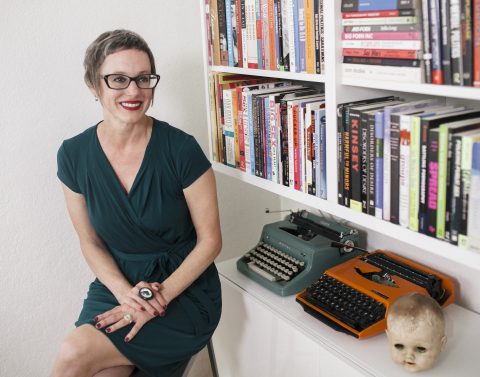