Drawn into the newest episode of NBC’s “The Office” by the Title ” Sex-Ed,” I was intrigued to see how they were going to approach the topic. While I’ve always enjoyed their heart felt lessons, variety of relationships, and sometimes current/progressive issues (perhaps mostly if you’re already reading through that lens) I was really intrigued to see the daring of bringing it up in the first place. Perhaps talking about Sex Ed with adults is easier than talking about Sex Ed for young people, but it’s not THAT much easier.

The episode’s catalyst is Michael’s cold sore that is declared to be herpes by Meredith, known to be the most vocal about her many sexual exploits, because “she’s seen them on her own genitalia”

joke 1: Kevin asks confused, “Meredith, YOU have a PENIS?”

Genitalia = the sexual organs; the testicles and penis of a “male” or the labia,clitoris, and vagina of a “female“. I add the quotation marks to indicate that these genders are often assigned or assumed to match these body parts, Don’t Assume what someone’s got in their pants!

The office is horrified. While Michael embarks on a journey to revisit his past girlfriends to warn them of their possible exposure to his “herpes” the rest of the staff continues talking about how “nasty” she is, Andy stands up to them with the line “You know, the most common STD is ignorance”

Deep, or it might’ve been if it wasn’t delivered as a punch line or the cause of his impossible love for his coworker Erin.

So Andy devises a plan to present a sex education workshop that the staff only attend with the promise of free pizza and a break from their regular work day. This workshop was supposedly reminiscent of Andy’s days of being a college RA and was put together fairly well, but with a number of fatal flaws. 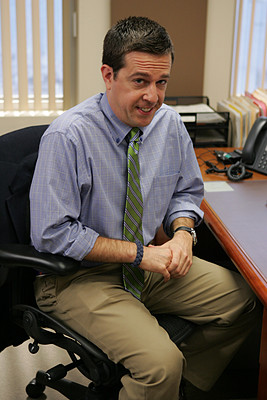 The most important first step of any sex education workshop is to create a safe space for the participants to have the discussion ahead. Andy however launches into his presentation by showing a picture of “Normal” Genitalia.  I will give Andy points for having a picture of a Person of Color, but even so you can’t just spring pictures of penis’s on people. He quickly follows up with another picture of “Normal” genitalia, but this time the penis is apparently covered in herpes. The office all reacts in disgust- making it infinitely more awkward for Meredith who was no doubt now imagined as having these intense outbreaks as well.

While I appreciate that he attempted to normalize STIs, I don’t think it’s helpful to use the term “normal.” I don’t think pictures of STIs are very effective teaching tools because they’re not only scare tactics, they paint an inaccurate picture of the reality of STIs. The most common symptom of an STI is that there is no symptom. If folks are waiting until they see those bumps and sores to be alarmed, then they’re waiting for STIs to progress and cause irreversible damage to their bodies even if the STIs themselves could be cured with antibiotics (at least the bacterial STIs can be).

Andy’s next activity encourages people to think about the consequences of sex. He begins with STDs and is quickly derailed by an outburst that sex feels amazing. He laughs awkwardly and says, “I guess we can add a pro’s column . . . “

The quickest way to lose an audience is to forget to talk about the good things about sexuality. The world continues to have sex (or at least sexuality) for many reasons and it’s important to let folks talk about what it means to them.

Someone throws out “The pure feeling of risk” in a positive light, and Andy, defeated, puts it on the pro’s list without questioning whether that risk involves potential physical, emotional harm, or if it’s out of a sense of taboo, and what the difference is between the these situations.

“Unwanted” pregnancy comes up and the staff tell Jim and Pam to admit that their baby was a “mistake” and thank goodness the writers make Darryl infinitely wiser than the other staff he corrects that he’s sure their baby wasn’t an accident. He adds “Unplanned pregnancy” to the pro’s list.

I might be inclined to describe that pro as “babies” but hey, sometimes unplanned things are the biggest blessings.

When he attempts to demonstrate using condoms with a PENCIL (highlighting the importance of being prepared), the crowd erupts and Andy exclaims to Meredith, “I’m doing this for YOU!”

Meredith: I don’t want it!

Again the error of non-consensuality in the manner of engaging his co-workers in this conversation is the only mistake larger than forgetting to talk about the importance of consensuality in sex.

And speaking of non-consensual, Michael throughout the show has been popping in unexpectedly on all his past girlfriends to tell them about their need to get tested. I would definitely recommend approaching those topics more gently and more privately. His conversations are derailed as he begins to question his relationship patterns.

The icing on the cake is the funny bit at the end of the show before the final credits roll. Oscar, the openly gay employee, is seated as Michael reminds him of the time they “sucked face” in order to fight the stigma of gay kissing. (when Michael was trying to prove that we wasn’t homophobic by demonstrating on Oscar without his consent)

Michael tells him ” You may have given me an STD”

Of course! Blame it on the queer character. . .

And then Dwight says that he’s going to need a list of all the men that he’d slept with “I’m talking train stations, men’s rooms, flower shops, fireworks displays, a fence with a hole in it, on a gondola, a carriage in central park, the woods behind the liquor store. . . ” and the list continues on and on. Oscar walks out, offended as always, somehow signaling that the show isn’t homophobic because they’re recognizing that it’s offensive.

While listening to the list, it seemed that Michael’s outlandish and clueless guesses about where these imagined sexual exploits took place but Dwight listed many popular cruising spots known in the community. I’m not sure if the glory hole was supposed to be recognized in this outlandish list, or any of the spots were meant to be taken seriously- but I was sad to see another opportunity lost.

I would get into trouble introducing the idea of gl0ry holes to a classroom of high school students, but they’re parents don’t understand that they may have been watching this movie, another reference in popular culture, or from seeing them in real life- it’s important to talk about it. Now it’s just another taboo topic to be locked away in the subconscious until they have the freedom to explore, and often without the knowledge to do so safely.

While sex in The Office seemed like it was going to be awesome, I ultimately left unsatisfied.