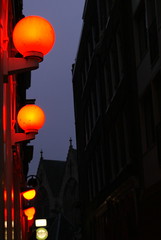 So many couples worry about raising sons who will respect women–at least, some women. The same people who teach their sons to respect the average woman on the street often seem to teach their sons to disrespect and dishonor any woman who is paid to be sexy. Perhaps they think that this sort of treatment will discourage their sons from using sexual services (yeah, right) or, at least, from ever bringing a sex worker into the family. However, in my opinion, women are women, and teaching a boy to disrespect certain women based on the type of sex they choose to have will not result in a man with an entirely healthy relationship with the opposite sex.

I want my boys to be smart about sex work. I don’t want to worry that they’re visiting a victim of sex trafficking just because they don’t know any better or that they might pay (or try to pay) a sex worker more to skip the condom. If, when they’re all grown up, my boys decide that it would be fun to visit a strip club or a brothel, I want the women they interact with to be glad to see them.

I’ve thought a lot about how to do this. Really, I can only talk to them and encourage my husband to talk to them, too. I feel that they should know about safer sex, why women choose to be sex workers, how to tell a sex worker from a sex trafficking victim, and how these women might fit into their lives and society in general. And of course I want them to respect and be proud of *me*.

I feel like discussing these things with my sons will prepare them not only for the possibility of seeing a sex worker, but in the event that they decide to *do* any sex work. I’m often asked how I would feel if my kids were sex workers and it’s the same as I’d feel about any work they might do. For example, I would be more proud if they’re sanitation commissioners than if they became school janitors. If my sons became wildly successful escorts or adult actors, I’d be thrilled, but I’d be a little bummed out if they were low level, unsuccessful sex workers of any kind.

Knowing about sex work will help my sons interact with their peers who may see sex workers, even if they don’t visit sex workers themselves. Maybe they’ll even be able to tell those peers a thing or two about the women they’re supporting–leaving out the bit where they got the advice from their mom or dad. They’ll know what qualities to look for and how to get the best experience possible. Most importantly, they’ll be able to keep the relationship in perspective.

I’ve had so many clients who really just don’t know how to talk to sex workers. They think that there is a secret code that will get me to offer services that are outside my limitations, that I *must* do anything that they ask just because they’ve paid me, that we’re enemies instead of partners. Others just don’t seem to know how to talk to me or even if they should be polite. Am I a date? An employee? Should I be ordered or asked to do things? Should they be embarrassed? Should they show no restraint at all? I don’t plan on discussing each of these questions with my sons, but I do want to give them an overall impression of what it means to be a sex worker so that they won’t stumble quite so much.

I also feel that teaching my boys not to shame or judge sex workers will allow them to connect better with the non-sex worker women in their lives. They’ll be able to openly discuss the issue with girlfriends and wives who may not have any experience with sex work and it won’t be some dark secret, tinged with both desire and guilt.

Of course I wouldn’t mind at all if one or both of my sons decided to date or marry a sex worker. Knowing just what sex work is makes it so much more approachable. I wouldn’t be surprised at all if they took advantage of that to find a partner who was attractive, had a lot of free time, earned a good income, was all but guaranteed never to be out of work, and knew a bedroom trick or two. I’d be proud that they wouldn’t have to hide that partner’s profession from me or my husband.