Steve and I went to ISU. So did Jane Lynch; Jane, Steve and I had the same acting teacher. Shar went to Southern Illinois University at Carbondale. Steve, Shar and I, are working hard on the event lining up some amazing performers and some very cool things in the silent auction including some wonderful art. We recently received a donation for the silent auction from Jane Lynch. It’s a track suit worn by Sue Sylvester on Glee. And it’s autographed. That’s pretty great.

Some people have asked, “Why do a fundraiser for queer kids in Illinois who have been cut off by their families and why not for the queer homeless kids in San Francisco?” My answer has been this: If you want to donate to queer homeless youth in San Francisco, please, please do so. Please try not to think of this as “either, or” but “both, and.” And if a queer college kid has to leave home and school because they have no support from their family, one of the places they might end up is the streets of San Francisco.

I was at Illinois State university from 1968 through 1975 getting my BS and MS in art. I was involved in the LGBT group that was then called Gay People’s Alliance and was mostly L & G. Most people in GPA were going to be teachers and had to remain solidly in the closet. We had a speaker’s bureau that did most of the Homosexuality presentations in the Psychology and Anthropology departments. We would meet with the instructor just before the class to go over the class list so that we would not have to out ourselves to people that we knew. That was such a long time ago.

Recently I was reading a book called The Transgender Child by Stephanie Brill and Rachel Pepper. In the chapter on college, the book suggests that parents research which school would have the best resources for their child. It makes sense but it is so very different from when I was in college. So I Googled ISU and LGBT. The very first thing that came up was the form to complete to be considered for the LGBT Student Support Fund.

From the fund’s application form:

“The vision for the LGBT Student Support Fund is to provide emergency grants for students who lose the financial support of their family due to their sexual orientation. The primary focus of the initiative is to create a safety net, keeping a student enrolled while he or she works through family and financial issues.”

I did some more research and it seemed that with each new bit of information was another ‘ah ha’. GPA never kept a membership list because we needed to protect people’s privacy. Now there are pictures of actual ISU LGBT students online. All of the LGBT faculty were very closeted when I was in school. Now, not only does ISU have a LGBT faculty and staff organization, but I understand that is where the idea of a LGBT Student Support Fund originated. This might be the only fund like this at any university in the United States.

So I decided to do a fundraiser. When I tell my friends that my alma mater has an emergency fund for LGBT students who had cut off by their families I watch their eyes light up. “That’s so cool,” they say. “You’re doing a fundraiser? How can I help?”

Very recently one of Normal’s co-producers was meeting with a choreographer who teaches at a local college. She said that just that day a student had come into her office, closed the door behind himself and said that this was the worst day of his life. His mom had found out that he was gay and told him they were taking him out of college and sending him to a psychiatrist. The teacher reassured him that he also had family in the dance department and that the college would deal with it if his parents wanted to take him out of school.

This is exactly what this fund is about. And this stuff still happens all over, even in the progressive Bay Area.

In an email blast that I sent to my friends, I said: “I want to think of this event as a prayer, a blessing, a poem, a spell that reminds us that LGBT kids get thrown out of their houses (sometimes literally) and get cut off by their families… let there be more emergency funds like this in colleges and universities.” 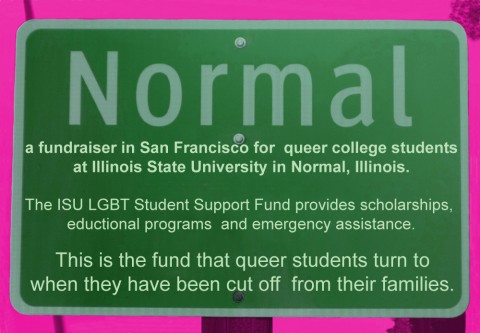 Normal
A fundraiser in San Francisco for queer college kids who have been cut off by their families, benefiting the LGBT Student Support Fund at Illinois State University in Normal, Illinois.