What We Must Do To Eliminate Rape Culture

read Part 1 here: Educating About Sex in a Rape Culture

This post is part of the Summer of Consent series, as announced by Dr. Carol Queen

In part one of this series, I detailed what situations I believe contribute to American society being a culture of humiliation and disrespect (a.k.a. Rape Culture). Ours is a culture steeped in a deep disrespect for women, not to mention a disrespect for any “other,” and for some reason, for many there exists an absolute inability to listen when something has a “feminist” undertone. Many people fight the notion that “rape culture” exists. Perhaps the idea and the real pain behind it is too difficult to grasp so it is easier to deny.

Situations that come up from time to time, like Steubenville, rapes on university campuses, etc., scare me to no end. I find myself unable to even read the accounts without getting extremely upset, if only for the depictions of its utter disrespect and stupidity on all levels. I know these are not isolated events. I know there are plenty of kids out there who think rape is only rape when it’s violent, or think it’s only rape when drugs are present or it’s at a party. Just because many people think that rape is only rape when it’s the drag-you-into-the-bushes-and-kill-you kind does not make it so. Let’s take action where we need to and punish those who rape. But let’s also try to figure out how to educate everyone and to fix this so it doesn’t continue to happen!

I believe the best sex education starts very basically and really has nothing to do with penises and vaginas/vulvas. To help people understand the nonsexual components of human sexuality, I have identified these 5 Building Blocks to a Healthy Sexuality (Communication, Consent, Respect, Pleasure, & Fantasy). My model has not yet been part of a research study with an independent review board, yet I look forward to peer review and any feedback on these. I have identified these blocks based on the observations of a sexologist, sex educator, and mother. If you break down the problems we have in our society right now with sex and sexuality — not only rape culture — these problems could be aided addressed by thinking about the five building blocks as being a foundation for where we start to educate people about sex and sexuality. Again, the important thing to note is that none of these blocks has anything directly to do with penises and vaginas/vulvas, but they absolutely are part of where we start to teach young people. It doesn’t matter if you are a person who believes in comprehensive sex education or “abstinence-only before marriage” sex education; these blocks apply to both approaches. They are also absolutely for everyone at any age and you can start learning them at any time. Now would be good. 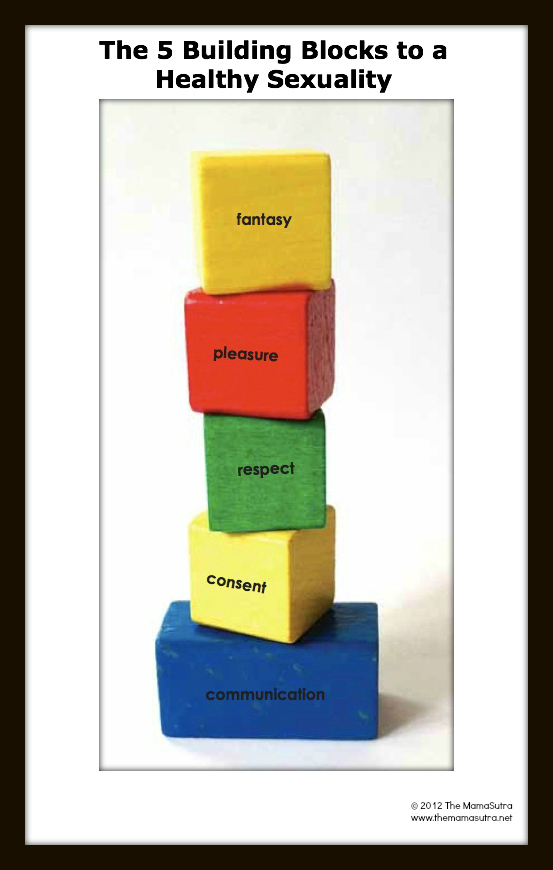 It is not enough to say that “people should just know these things” — that it’s part of being a good human being. I think rape exists because no one has taught anyone about the importance of these five blocks:

When we can teach these things to our children they learn skills that they can apply to their relationships as they grow and develop. How many of us could have used these lessons growing up?

Here’s another piece of my own suggested solution:

These suggestions are just the tip of the iceberg and are really focused only lightly on the first two blocks: communication and consent. There’s so much more to both of those blocks and I am writing a more in depth work about each of these five building blocks. Each of the five is vitally important to the conversations and lessons about sex and sexuality.

Many parents have a difficult time broaching the topic of sex with their children. It’s understandable: not many of us got good sex education as we were growing up. I think if parents realize that the conversations that lead up to the tougher questions about sex and sexuality were so basic, the concepts that need to be discussed are so elementary. These 5 Building Blocks To A Healthy Sexuality are it. Our children learn math and some of its basic concepts when they are toddlers. You don’t start off with calculus. You start first with things like one block, two blocks, etc. Then over time we teach them how to add and subtract. Hopefully they’ve gotten those concepts down when we add into the mix multiplication and division – and so on. The same approach follows with discussions about sex and sexuality. You start with more basic concepts. That is what I propose here.