Joani Blank, who founded Good Vibrations in 1977, has died. She was 79 and had been diagnosed with pancreatic cancer just over two months before.

True to form for a woman who promoted her business with the phrase “If you want something done right, do it yourself,” Joani died at home, with family and her beloved dog Bapu at her side, on her own schedule. Just a couple of months after California legalized physician-assisted suicide, Joani chose to treat her symptoms palliatively but not the aggressive disease itself, whose poor prognosis and painful treatments would have curbed her ability to enjoy her last weeks of life. Her August 6 exit followed a month of tributes and time spent connecting with family and friends; she was proud to face death with the same degree of forthrightness and fearlessness she brought to discussions about sexuality. 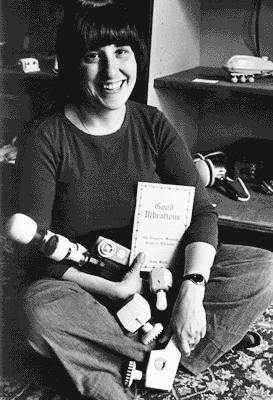 Joani was already working to change society’s attitudes about sex, especially women’s sexuality, sexual health, and reproductive rights, when the idea to form Good Vibrations hit. Involved with San Francisco Sex Information in the early 1970s, she founded Down There Press in 1975 (its first project was her book about vibrators… in calligraphy!) and then began working with famed feminist sex therapist Lonnie Barbach’s project to support “pre-orgasmic” women, held at UC Medical Center. It was there that Joani heard countless women, when recommended they try a vibrator, protest that they would never want to enter one of those places to get one. In what we called a “click” moment back then (like a light switch flipping on), Joani realized how much she could contribute by creating a very different kind of place. Touted as a “clean, well-lighted place for sex toys, books, and [later] videos,” Joani’s brainstorm did indeed immediately serve women––and everybody else, since people of every gender and identity, it turns out, needed a place that focused on comfortable communication, correct information, and good-quality sex-related products. In many ways, that’s still GV’s mission in a nutshell. Her first store was about the size of a postage stamp, but it made room for a shelf full of antique vibrators (so her customers would understand that these handy helpers had a much longer history than just as implements of the sexual revolution). This became the seed of the Antique Vibrator Museum, of which I am today the proud curator. 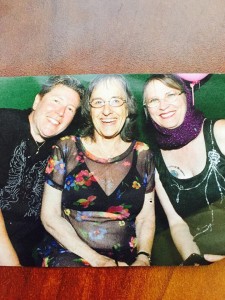 I began working at Good Vibrations in 1990 after I’d met Joani a year or two before; we were both participants in one of Betty Dodson’s rare west Coast Bodysex workshops, which is a hell of a way to meet a future employer! But JB (as I called her) was more than that to me: she was a friend, a mentor, and an inspiration, supporting my growing role at Good Vibrations as well as my community projects and my solo work, including my writing. She published my first book, Exhibitionism for the Shy, and her edits and encouragement added a lot to its impact. She did this for so many people, from helping Susie Bright launch her important Herotica series of women-authored erotic fiction to helping produce Shar Rednour and Jackie Strano’s first film “Bend Over Boyfriend”; she also consulted with and supported many (maybe most) of the businesses that emerged in the 1990s and beyond to become GV’s “sister stores.” (The story of these, and Joani’s visionary role in their creation and growth, is the subject of our friend Lynn Comella’s forthcoming book from Duke University Press, Vibrator Nation: How Feminist Sex-Toy Stores Changed the Business of Pleasure. Joani was only the second US woman entrepreneur to open a sex shop; the other, Dell Williams of NYC’s Eve’s Garden, died in early 2015). 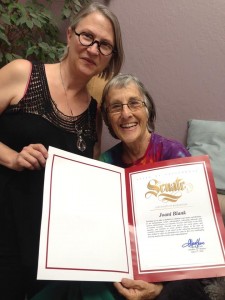 On July 14th many of the current core staff of Good Vibrations gathered to honor Joani’s role in our lives with more than two dozen past staff members, including important colleagues from the 1980s and ‘90s like Cathy Winks and Anne Semans, who formed the heart of Joani’s inner circle when I arrived at GV in 1990. Though rapidly organized, word spread far and wide, thanks to the energies of old-timers Shar Rednour, Deborah Mayer, and Samantha Miller. People who couldn’t make it from out of town, like Charlie Glickman and Roma Estevez, Skyped or FaceTimed in so they could participate. Also present were Joani’s daughter Amika and her sister Bobbie. Tributes, anecdotes and memories flowed.

“I will miss Joani very much and am deeply sad about her passing,” says Jackie Rednour-Bruckman, now Executive VP at Good Vibrations but originally a mid-1990s SESA. “She was so vital and so ready to do so much more before cancer took her way too fast and too soon. She was 79 but young at heart and still had so much to say about everything and was deeply involved in many social justice issues. I will treasure her friendship forever––we had a special bond and I am grateful forever to her loyalty and love and inspiration. I hope I have made her proud.”

All of Joani’s many communities came together on July 30 at The First Unitarian Church in Oakland to celebrate her life. Just down the street from her home in the Swan’s Market Cohousing community, this was JB’s own congregation, where she’d enjoyed singing in the choir and making connections. She sat to the side, happily engulfed in love and appreciation, as her beloved choir made music for her and speakers from many sides of her world spoke up in tribute. Other entities deeply important to Joani are cohousing; the Human Awareness Institute; and the UU Church (which isn’t surprising, given its own revolutionary track record on behalf of sex education)––and someone was on hand from each of these to talk about Joani’s participation and contributions there. I spoke up on behalf of Good Vibrations; David Steinberg, an old friend and publishing associate, spoke too, and JB’s sister Bobbie sent a letter about their family history, read by Joani’s cousin Susan Sugarman. Amika, with her three beautiful kids at her side, spoke movingly about her changing and deepening relationship with her mom, and how the social consciousness that Joani embodied in public had real meaning inside their family too. 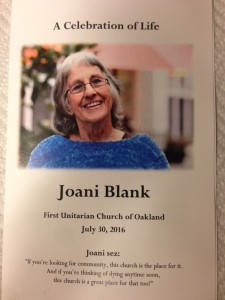 Joani also aimed her activism at the world of money, and she invited her philanthropic advisor, “resourceful woman” Tracy Gary to speak about JB’s history of giving and to encourage attendees to donate to causes close to Joani’s heart. (I’ve included those below for any readers who want to participate in honoring her in this way.) Early in Good Vibrations’s history Joani was part of an alternative business philosophy called Briarpatch, which held that competition was not a threat and a rising tide would float all boats; this explains her willingness to consult with and support friendly competitors, since her vision of change involved empowering others to create businesses just as she had done. Joani believed in word of mouth over ads and felt that community engagement was the most significant way she could promote Good Vibrations and its message. It was never primarily about money for her, but about the effect GV could have on the culture. I have such a unique career today because, really, she was right: The needs of individuals and communities are still to quash shame, find the right information and good-quality products that will enhance and support pleasure and self-exploration. From those seemingly simple things, a world of change and ever-developing identity can emerge. We can all be enormously grateful to Joani Blank and her pleasure-centric, culture-shifting vision.

Joani selected five organizations to which contributions may be made in her name:
*Human Awareness Institute (www.hai.org)
*Democracy at Work Institute (www.institute.coop)
*Center for Sex & Culture (www.sexandculture.org)
*Cohousing Association of the US (www.cohousing.org)
*First Unitarian Church of Oakland (www.uuoakland.org)
Or support a nonprofit organization of your choice.

Joani is survived by her adopted daughter Amika (open adoption was another of the causes that benefited from her activism) and her grandchildren Milo, Soleil, and Blossom; constant canine companion Bapu; her sister Bobbie (aka Barbara Hauser) and other relatives; and countless friends, colleagues, and activist buddies whose lives were stretched in many ways thanks to Joani’s leadership, honesty, and immediacy. She will be deeply missed in many hearts and communities.

For more about JB, you can visit her website: http://joaniblank.com/ 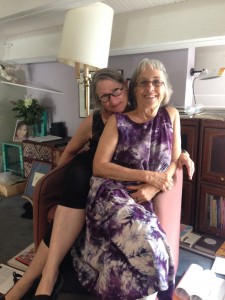