Take a trip back in time, to underground queer San Francisco in the repressed 1950s. With noted queer academic and visual artist Katie Gilmartin as your tour guide you’ll see far more than meets the eye, and discover some fascinating antecedents to SF’s famed LGBT rights struggles. Blackmail, My Love: A Murder Mystery is Katie’s first novel, and it weaves real history, Katie’s evocative artwork, and a gripping story into a must-read tale! I asked Katie to gives us a bit of background–her fascinating answers below! Don’t forget to come to our Berkeley store this Thursday to get your book signed and hear Katie read from this very significant–and very entertaining–book. –Carol Queen, PhD

CQ–What’s the backstory re: your decision to set a novel in queer San Francisco of the 1950s?

Katie–I’m fascinated with the fifties. Who would I have been if I’d lived at that time? Would I have been the big brazen butch whose bar fights carved out social space for us to find each other? Would I have been the closeted housewife who had a decades-long affair with her “best friend,” the housewife two doors down? Or would I have been too afraid to act on my desires at all? My graduate research involved interviewing lesbians about their lives in the 40s and 50s, so I’d been given a glimpse of the ways people negotiated the terrors of the time. I wanted to explore the various states of mind I learned about in those interviews: from those who bought everything that was said about homosexuality – that we’re ill, unstable, dangerous pedophiles – to those who managed to resist all that. One woman I interviewed said she remembered very clearly thinking, “I’m homosexual and I’m not mentally ill; so they must be wrong that all homosexuals are mentally ill.” But what strength of soul that took! Writing Blackmail, My Love gave me a chance to explore what it was like to dredge up such strength in the face of such repression.

CQ–Was there an actual case or scenario that inspired you, or any historical figures? 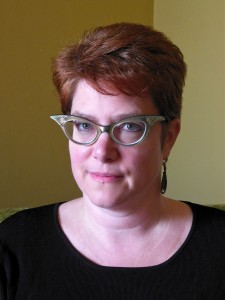 Katie–Yes, there’s amazing bar history that takes center stage. There were more gay and lesbian bars in San Francisco in the fifties than there are today! The bars were, of course, subject to ongoing harassment – raids, demands for protection money from the police, violence, and so forth. But in a little-known case, the California Supreme Court ruled in 1951 that bars could not be shut down solely because homosexuals gathered there. Sol Stoumen, the heterosexual owner of the legendary Black Cat Cafe, initiated the case when the Board of Equalization suspended his liquor license because the cafe was “a hangout for persons of homosexual tendencies.” While Stoumen initially denied the charge, he hired a lawyer who shifted the focus of the case to civil rights, arguing that homosexuals, too, have a constitutional right to public assembly. The San Francisco Superior Court and the First District Court of Appeals denied this right, but the California Supreme Court agreed to hear the case. In their decision they cite an Oklahoma ruling in which prostitutes were classified as human beings and therefore entitled to such basic human rights as food and shelter, as long as it was not provided for immoral or illegal purposes. Having affirmed that homosexuals are human beings, the court ordered the Black Cat’s liquor license restored.

Characters in Blackmail, My Love discuss the case and its ramifications for Queer bars and community – what happened was, the police came up with new tactics for surveillance. They focused on the fact that, if they could identify criminal activity, they could raid the bars. So bartenders became de facto chaperones, trying to ensure that patrons didn’t do anything that could be construed as illegal. The police focused on identifying – and in many cases instigating – illegal acts such as same-sex dancing, or even a man placing his hand on the knee of another man. They trained their youngest officers and agents to affect “homosexual mannerisms” and to “come on” to bar patrons in order to produce evidence of criminal activity. This all works its way into the mystery in Blackmail, My Love – and the characters figure out creative ways to fight back.

CQ–What’s the most important thing the LGBTIQ community of today can learn from the queer world of that era?

Katie–To stick together. That involves appreciating our fierce leaders, and taking care of those in the community most in need of support. Honoring our gender warriors and the fact that they make more room for all of us. And forcing our resistance with creativity and style.

Katie puts her time and talents where her mouth is! She will host a FREE workshop series for young LGBTQI artists exploring linocut printmaking (her specialty) and their queer ancestry; scroll down for more information.

And! Meet Katie on Thursday, December 11 at our Berkeley Store! Details:

FREE!
Thursday, December 11th
6:30-8:30
Blackmail, My Love bookparty
Berkeley store: 2504 San Pablo at Dwight
Good Vibrations welcomes you to a very special book celebration! Katie Gilmartin dug deeply into the annals of San Francisco’s storied past to produce Blackmail, My Love, a brilliantly conceived and artfully illustrated murder mystery that serves as a revelatory secret history of San Francisco’s Queer underground of the 1950s. The plot is fueled by a 1951 California Supreme Court ruling that homosexuals had a right to congregate, a decision that stopped police raids but created backlash in the form of surveillance, entrapment and more police brutality. Set in such legendary locations as the Black Cat Cafe, the Fillmore district during its heyday as jazz capital of the West, the Beat movement’s North Beach, and the sexually complex Tenderloin, Blackmail, My Love is a neo-noir that distills history and fiction into a singular, visually stunning experience.

Katie Gilmartin received a PhD in cultural studies from Yale, with an emphasis in Queer history. After teaching the history of sexuality and Queer studies for a decade at the University of California-Santa Cruz, University of California-Berkeley and The New College, she became a printmaker. Her prior publications are academic essays based on interviews she conducted with lesbians about their lives in the 1940s and 1950s. This is her first work of fiction. Gilmartin lives in Oakland, CA.

Space is Limited
Commit to Attending All Classes
And to Creating Prints Exploring
Your Queer Ancestry
Information & Applications available at
http://katiegilmartin.com/queer-ancestors/