The Magic Wand made its North American appearance in the 1970’s, along with bell-bottoms, platforms, and atomized individualism.  I, however, did not make MY North American appearance until the late 1980’s.
When I was around five, I would spend my afternoons harmlessly going through my Grandmother’s dresser, while she was in the kitchen making me grilled cheese sandwiches.  I would collect the dusty pennies I found and stash them in a jar in my bedroom.  One summer, while going through her sock drawer, I stumbled upon (what I now know to be) the Magic Wand.  I had no idea what it was, and since I wasn’t allowed to plug things in without adult supervision, I shoved it aside to look for more pennies.  For the next few years, the Magic Wand annoyed me.  It was huge and it was only getting in the way of my penny pillaging. 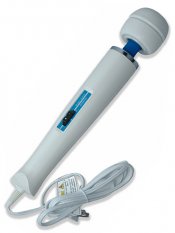 Magic Wand, the “Cadillac of Vibrators”

I didn’t have a name for this penny-collecting obstacle until I was in high school. During a sit down dinner with some of the women in my family, my aunt brought up the Magic Wand.  Whenever she mentioned it, she spelled it out “H-I-T-A-C-H-I”, the company’s original brand name, forgetting that I was old enough to spell.  When she wasn’t spelling it out she called it “the Cadillac” of vibrators.  For years I thought she made that term up, but she actually read it somewhere and then passed it on because it’s an extremely accurate description.  I think I was sort of turned off because of that reference.  I’m not that into Cadillacs, or cars at all for that matter.  Had she called it the “holographic Charizard Pokemon card” or “Princess Diana Beanie Baby” of vibrators, I think I would have understood a little better.  Cadillac schmadillac, 90’s pop culture phenomenons-now that’s something I know about.

I actually didn’t set my eyes on a Magic Wand until I was around 22.  My first thoughts were, “wow this thing is gigantic”. The sheer size of it turned me off, and the fact that it is on the lawn mower end of the noise spectrum.  This made me think that maybe by “Cadillac”, my aunt meant “loud and huge”.

I was expecting to spend somewhere in the $150 range (I didn’t even want to think about how many cappuccinos I had to make to earn that).  I walked in with $150, and walked out with $90 and the Cadillac/Holographic Charizard/Princess Diana Beanie Baby of vibrators, the Magic Wand.

Wow, just wow.  And just like that (even though I had technically already paid for it), I was sold.

I still use my Magic Wand full time, it has not gotten old, and I can still orgasm from hands and other less intense vibrators (this is something I’ve been asked by friends when they discover I own a Magic Wand).  The key is changing up your routine and using a variety of methods to stimulate yourself and reach orgasm.

I’ve also found that there are a multitude of ways to create different sensations with the Magic Wand using Silicone Pop Tops and Tenga Egg Masturbation Sleeves to cover the top.  As for the noise?  I don’t live at home and a lot of my Magic Wand use is with my partner (yes, it can totally be used with a partner) who refers to it as “The Bat”.  It probably sounds like a vacuum or the microwave to my neighbors, which is fine, they probably think my carpets are SUPER CLEAN and/or the only things I eat are Hot Pockets and frozen burritos.

Moral of the story?  If you’re in the market for a new/first/millionth sex toy, spend the $55 on a Magic Wand.  It’s worth it.  My aunt doesn’t lie.  No, the package isn’t fancy, the wand isn’t bedazzled, and you can’t synch it to your Ipod, but it WORKS.  Plus, you can probably bedazzle the handle yourself if you really want to.

Johnnie Vega is your angry sex nerd, riding the fine line between their early and late twenties. She is also a fashion school dropout, sex educator, thinker, comforter hog, and compulsive coffee consumer. As a Bay Area Native, Johnnie V, knows more than she’d care to admit about astrology, knows endless ways to fit “hella” into every day conversation, and has seen unfortunate amounts of people “ghost ride the whip” in real life.