Inside the Quickies: Das Randy Radfahrers

An interview with Poppy Cox!

Bike Smut spent most of last year on the road, and we did our first ever European tour. (We do not release DVDs or put the films online, so the only way Europe was going to see these films is if we took them there.) Berlin was kind of our home base while we were there, so we ended up spending a fair amour of time there. While there, we got to meet (and fuck) these two wonderful dutch bike-sexuals. I had had the idea for the film for a while, meeting a hot cyclists at a stop light and getting them to chase me through the city is a personal fantasy of mine, and after spending time with these two, I knew they would fit the part perfectly. They were both super excited to shoot something for Bike Smut and have us share it all over America, too. 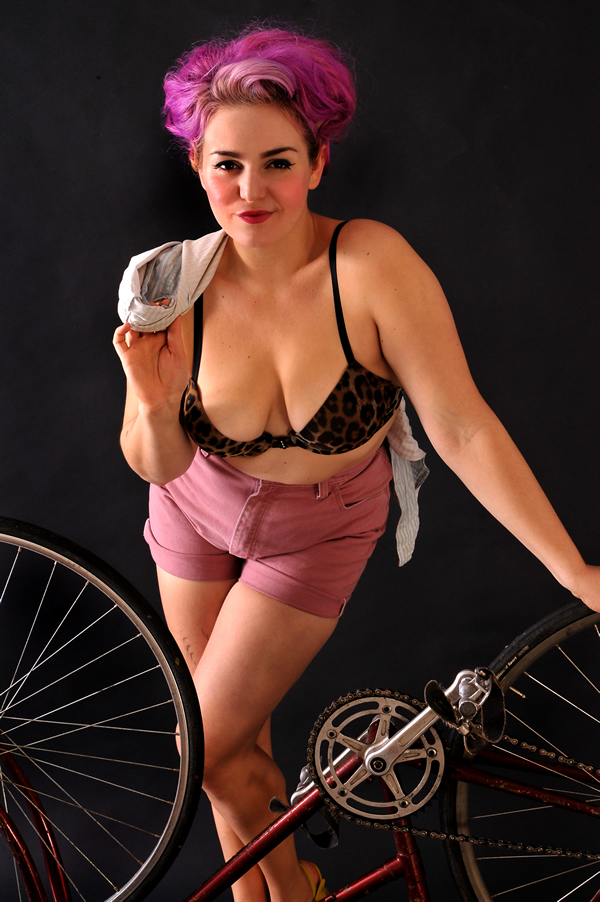 I actually think seven minutes is pretty generous. Editing is one of the hardest yet most important parts of making film. Having limits on length forces you into a more creative way of story telling. Keeping the story line simple is key, and remembering that you don’t need to show everything that happened in order to tell a story.

I haven’t ever really made a non-erotic film. (Maybe one in high school, or something.)  I majored in photography in college and have always been a big cinephile, which was the main thing that was holding me back from becoming a filmmaker myself. I have so much respect for the medium, that I would be really upset if I made a bad movie. However, as I got more involved in other types of sex work, creating a better representation of human sexuality in porn became very important to me. As a feminist and a sex worker, I came to the conclusion that the most feminist thing I could do was to make pornography. While I knew of (and liked) some alternatives to the mainstream, I still couldn’t find exactly what I was looking for in the genre.

I hope they get turned on, of course. I hope that for the non-cyclists out there, they might see bicycles a bit more as an object of desire, which will hopefully encourage people to ride bikes more. I also hope that they see that the medium of pornography does not necessarily dictate a soulless and mechanical representation of sex. It is possible to capture the excitement and curiosity that is happens in sexual exchanges on film.


6. Were there any funny or unexpected moments while filming?

We shot in July, and summer in Berlin is beautiful, for the most part. But it still rains on occasion, and when it rains, it rains really hard, for quite a few days. That happened on the days we had scheduled to shoot, which meant we had to squeeze the shooting in on the last 2 days I was in town, but we got it all done in the end. Other than that, they were so great and fun to work with, plus I think they are both SO hot, shooting them was such a pleasure.
7. What projects are you working on now/next, and where can we find you?

We get to NYC in the end of October, and from there we head south pretty quick to start our first ever tour in Mexico, with our first show in Mexico City!

We plan to be in the bay area again in January. You can follow @BikeSmut on twitter for updates on tour dates, or check out bikesmut.com.
Thanks and good luck at the competition! Find more info about this year’s festival at GoodVibesQuickies.com. Get your tickets through Brown Paper Tickets today!