Inside the Quickies: Love Birds

An interview with Brian Lye!

I heard about it from two friends, fellow filmmakers here in Vancouver, BC.

My film is a love story, it stars humans who are acting as birds.  I was inspired to make it because I took an acting class where we are all playing as animals and this concept became very interesting to me.  I was also inspired by how I think we look funny when running around nude.

Challenges in creating a short film are that you have to be simple and clear, especially with the story. I think if it gets too complicated it becomes impossible to make something coherent in a short time period. 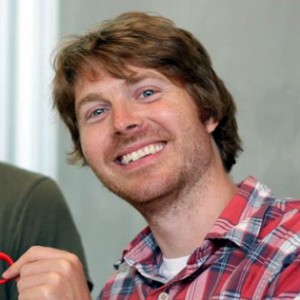 I hope the audience will enjoy themselves watching this film, in whatever capacity enjoyment means  for them.  I hope the film will entertain and put some smiles on faces.

6. Who are your performers, and how did you meet them/invite them to participate?

The actors were awesome people.  Maja, the female bird, is from Croatia, she is a good friend of mine, she has been performing as an actor/musician/poet/dancer for many years, she is one of the more open and free people I know.  Beda, the first male bird, is from Prague, his background is diverse, he has been a ballet dancer, he is a musician and peformer, and again a very open and free and friendly person.  Jiri, the red bird, is also from Prague, he was really fun to work with, I think he was a bit shy at first with the nudity, but he warmed up very quickly and had a lot of fun on set.  He is a theatre actor.

7. Were there any funny or unexpected moments while filming?

One very lucky moment or experience while filming is that we were filming in a public nature reserve on the way to the airport in Prague.  That week was the week of the volcano erupting in Iceland that caused the dust cloud to float over Europe and cancel all flights, this was great for us because we would regularly have been in the flight path and had troubles with sounds/sights on planes in our shots/sound track.

8. What projects are you working on now/next, and where can we find you?

I live and work in Vancouver.  I have just finished a stop motion animation called Peach Juice that we are showing in festivals now.  And I am in pre-production for a collaborative documentary project together with members of the Uganda Skateboard Union, an organization I co-founded 6 years ago.