Inside the Quickies: Filmmaker Interview with Erika Lust

An interview with Erika Lust from “I Fucking Love IKEA”

Filmmaker bio: Erika Lust, born in Stockholm, Sweden, in 1977, is an independent filmmaker, author, and founder of Erika Lust Films. After graduating from Lund University with a degree in Political Science with a focus on Feminism, Lust moved to Barcelona, where her award-winning production company was established in 2005. 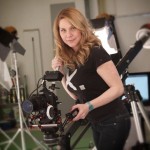 Well, I Fucking Love Ikea is part of an ongoing project called XCONFESSIONS, something inspired by my fans. This film was an anonymous confession posted on www.xconfessions.com, and it was too fun to resist! You see, every month, I pick two confessions from the site to be turned into erotic short films or items (e.g. fashion, edibles, cosmetics). After just a few months, there are now almost 20,000 members and 250 confessions on the site, and I couldn’t be happier. I Fucking Love Ikea was one of the very first confessions I chose back in August, and I have now filmed 10 all together, which will be available on DVD or to stream in December.

Since plot is a huge part of my all of my films, I think creating believable context was the greatest challenge. From the beginning, it never seems like enough time to set the stage, give life to characters, and show arousing sex. But I am fortunate in that someone has already written this brilliant and inspiring confession, so there is already background, plot and characters … I just have to bring it to life.

I was excited to work with Cristian Frei again (after he starred in my explicit video guides at store.erikalust.com) and he recommended up-and-coming actress Carol Vega to me.

Even with the stress of all-day shooting, the incredibly high temperature on the rooftop set, and the varying light conditions, the whole experience was very fun. Performers Cristian and Carol are friends and loved to joke around on set, and the whole storyline made us energetic and playful. I think this film is so different from my previous – it has a lot of pop art, bright highlighter colours, youth culture, sass, and overall character. It helped pave the path that XCONFESSIONS was going to take.

XCONFESSIONS is ongoing – each month I am picking new confessions, filming them and releasing them. Volume 1 (containing the first 4 short films) has already been released online, and Volume 2 (with 6 more films) will follow next month, as will a DVD. Check out www.xconfessions.com and confess! Who knows? Your dirty deed could be my next film!