How to Be an Asexual Ally (Part 3)

A guide to being inclusive: Part 3 of 3

So you’ve got some hints on how to make your asexual friends and loved ones feel valued and accepted, and you’ve heard from the asexual community on reactions we’d appreciate when we come out. Now we’re on to this:

What questions would we like you to ask, and what behaviors would we prefer you avoid? What assumptions would we caution you against making regarding us and others like us?

This, again, varies greatly by individual. If an asexual person has done something awareness-related in a public forum and you are interacting with that person through the public forum, questions are usually appropriate and even welcomed. Many asexual awareness activists are quite used to being asked out-and-out crude questions, so your polite ones are unlikely to offend us. Use a little more caution when you’re talking to someone who’s discussing the subject with you one on one. And you can’t go wrong if you politely ASK if you can ask first. Some people will just say “Sorry, I don’t really want to talk about my personal life.”

Some asexual people just want to be asexual people, not spokespeople. As with any small subgroup, we do often get portrayed as being representative of “our people,” so please keep in mind that we don’t necessarily speak for each other and that our answers are not to be generalized as the accepted status quo for “the community.”

Well, we would like your questions to be open-minded, polite, and not rendered in biased language. For instance, a question like “Don’t you think you’d better get your hormone levels checked?” is stacked toward “of course you should.” If you really want to know whether the asexual person in question might have a hormonal issue, keep in mind that’s a personal medical question and it may very well not be your business. Also keep in mind that hormonal lack of sex drive is different from lack of sexual attraction or interest, and if someone is actually lacking in hormones there are other health problems that may develop from it. We frequently hear these kinds of questions lobbed ungracefully by actual well-meaning people as well as from trolls.

In some people’s minds, these kinds of questions suddenly become fair game when people want to know how we function. I don’t recommend asking them unless your relationship with that person is such that you could have comfortably asked the same questions if the person wasn’t asexual. We generally don’t like being thrown impersonally under the microscope and used for answer mining. If you suddenly switch into “but the specimen exists to satisfy my curiosity!” mode, don’t be surprised if that person withdraws from you as a result. If you treat people impersonally and behave as if they owe you answers, they will withdraw.

Here are some discussions about assumptions you should avoid making . . . either privately or while asking questions. (Some are just consensus, and some are specific quotes from asexual people.)

Some of us are sex positive, or at least not sex negative (especially for sex that involves others). Remember that sex positivity is supposed to be about empowerment regarding sex–including the option to NOT engage in it. Unfortunately a lot of people misunderstand sex positivity as “sex is good, period.”  But if a person’s natural inclination does not include sexual attraction or inclination, this “celebrate sex!” attitude can be perceived as “what’s wrong with you, you sex-repressed prude??”  If you don’t want to sound like that to your asexual friends and family members, keep this in mind when you choose your words for your sex-positive message.  Make it about freedom, not about demonizing those who don’t feel interested.

Sex positivity is about choice–about not marginalizing anyone based on lifestyle or inclination, even if said lifestyle includes no sex at all. We might sometimes be relieved that we don’t have some of your problems, but believe me, we have a whole different set, and we don’t think we’re superior. Asexual forum participant qaface says, “I don’t want the [non-asexual people] to be like me, I accept them and their choices. I just want them to respect mine in return.” Similarly, forum participant feenix says, “I’ve encountered quite a few [non-asexual] people who, for some reason, respond to asexuality by asserting how sexual they are and how important this part of their life is to them. Hey, if sex makes them happy, then I’m happy for them – but it just seems like a strange reaction to me. I don’t automatically respond to discussions about sex/sexuality by declaring that I’m asexual and how wonderful it is.”

Sometimes well-meaning people bend over backwards to placate their one asexual guest, trying to avoid references to sex in conversation, or deliberately leaving their asexual friend out of an invitation to a movie that features romance or sexual situations. Unless we’ve expressed that we wish to be left out of this sort of thing, please don’t assume “oh that would gross you out,” and also don’t assume that we have no idea how sex works. Some of us have even had sex, and nearly all of us are going to know the facts of life if we’re adults. As best said by forum participant mullenkamp: “There’s no need to talk down or explain or censor oneself just because you’re talking to someone who isn’t sexually attracted to any gender [. . .] The fact that most people pursue and enjoy sex [. . .] is neither a revelation or a scandal.” 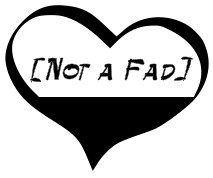 I don’t think asexual people are “a fad” any more than homosexuality was a fad when it seemed like suddenly there were more gay people than there used to be. See, for gay folks it was all about shame, and when communities found themselves enough that they could provide safe spaces for each other, more people could feel safe to be public about who they were. With asexual people, we’re much rarer than gay people, and since society constantly hits us over the head with “thou shalt pursue sex” messages, we know our feelings are unpopular. If there wasn’t an Internet-based community, most of us would probably be the only asexual person we’d ever heard of. And while awareness of a phenomenon does trigger some misdiagnoses, it’d be extremely offensive to write off everyone who comes out as asexual and send them away with a diagnosis of sexual-orientation-based hypochondria. It’s unlikely we read about it on the Internet and thought “that’s me!” if we’d never had an inkling of the sort before.

If we are telling you we’re asexual, we’re saying we aren’t sexually attracted to or inclined toward people. It’s a fact stating how we feel–not a logical decision based on close-mindedness that you have to reason with us about. In short, you aren’t going to change our attraction experiences by arguing that we won’t have a full life unless we “change our minds.” We haven’t made a decision. We’ve made an observation, and we’re living our lives based on the assumption that what we observed about ourselves is true.

And as a final thought:

Please remember that a big part of being an ally is being one even when no asexual people are there to appreciate it.

We don’t necessarily want to recruit you for an advertising campaign, but if you’re allied with our visibility efforts, you can help in a natural way. Do what you can as far as research on the subject so you don’t end up spreading misinformation, and if you see or hear a conversation that misrepresents, erases, or mocks asexual people/asexuality, say something. If you study sexuality or are in some way devoted to increasing awareness about its many facets, make sure you include asexuality in a realistic capacity–as in, don’t give it its own special section and then go back to discussing sexuality as if there’s no such thing. We’re not asking you to swoop in and play advocate if that’s not something you’d do regarding any other type of misinformation, but if that IS the sort of thing you enjoy, we’re happy to have you spreading helpful information.