How to Be an Asexual Ally (Part 2)

A guide to being inclusive: Part 2 of 3

(This is continued from Part 1: What would we like you to do to make us feel valued and accepted?)

So, now we’re on to the next step. If someone in your life is asexual, there will probably come a time when that person decides to tell you so. If you’re unsure of how you should act, read on!

Unfortunately, reactions usually come out sounding negative, even if they don’t mean them to–we often hear condescending utterances of “are you sure?” and “don’t you think you’ll regret that?” along with attitudes ranging from disbelieving to horrified. 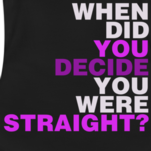 Much like gay folks, we’re used to being asked why we “decided” to be asexual. We’re used to being asked to attend therapy to “make sure nothing’s wrong with us” before we call ourselves asexual. We’re used to being told to just TRY sex or somehow change our inclinations, because surely it’s not such a big deal to try it, right? Well, say you’re a straight person. Say every time you say so, people ask you why you don’t try being “open-minded” enough to just try gay sex. You could be missing out! Do most people feel this is an inappropriate request? Probably. Would most straight people be able to be “reasoned into” recognizing their heterosexuality as merely a result of close-mindedness toward homosexuality? I don’t think so.

Please understand that it might feel like sex isn’t really a big deal if you DO experience that attraction, and for someone who doesn’t, “just trying it” might very well be too much to ask. (Especially since, in our experience, we just get told we did it wrong or with the wrong person if we try it and still don’t like it.) There are asexual people who have sex, and they do so for various reasons, but for many people a desire for sex grows out of being attracted to someone. Not being sexually attracted to anyone tends to strongly affect interest in seeking out sex, and some asexual people identify that way because sex just isn’t interesting to them or isn’t worth the trouble.

Look at it this way. If you can’t imagine yourself being attracted to or having sex with someone whose traits are unattractive to you (based on anything from gender to body type), you probably feel the way many asexual people do when it comes to willingness to try it anyway. Remember that they likely feel about all sex the way you feel about sex with people who aren’t sexually attractive to you, and asexual people are unlikely to see you as an ally if you tell them they “should” be indifferent enough to experiment. Asexual people don’t have an obligation to try to be otherwise, and that’s really important to remember when talking about our orientation with us. You’ll be establishing a double standard if you say straight people don’t have to try to be gay, bi, pan, or anything else before they’re trusted to label themselves, but that we on the other hand should try to be like you before self-identifying as asexual. You’ll have trouble getting us to take you seriously as an ally if you think we can only be asexual if we’ve tried and failed to be everything else.

This is going to vary widely depending on who the asexual person in your life is and what your relationship is like. But in general, if an asexual person is coming out of the closet and wants you to be partial to this revelation, the best thing you can do is listen.

This person is expressing trust toward you, and even if you have some misgivings about asexuality or don’t understand what it means in this particular asexual person’s case, if you don’t listen and at least try to process what is being said, anything you say against it during this delicate time may cause a shutdown or a withdrawal. The asexual person may regret being honest with you and may be completely closed to discussion with you on this topic if you don’t keep your mind open. Let us speak, and consider what we say without automatic condemnation. That’s all we can ask.

When an asexual person has just come out, don’t start setting down conditions for “belief.” If you’re reading this article hoping you can be an ally, I’m going to assume you aren’t the type who would start screaming “get thee to therapy,” would never go into denial and start forcing dates on the person, and aren’t interested in parroting the “you haven’t tried it/you haven’t met the right person/you’re too afraid/you have issues” mantra. Nevertheless, people who are trying to be supportive still make many mistakes in this situation.

This is important: when you’re made partial to this information about your asexual friend or loved one, it does not mean you are being asked to intervene. You’re not being asked for advice and you’re not being recruited; you’re just being asked to understand. This isn’t about putting yourself in an asexual person’s shoes; it’s about recognizing that people wear different shoes because they have different feet. If the only context you have for not having sex is wanting it but not getting it, you might have trouble grasping not getting it because you don’t want it. An asexual person’s life is not likely to be empty because of the lack of sex, so if this is the only way you can see it–if it seems bleak and boring and horrific to you–then you are not processing this person’s situation. You’re processing yours in a situation that would be distasteful to you, and until you accept that this is someone else’s “normal,” you may be unable to react constructively.

This is not the time to express doubts or ask the person to prove the validity of asexuality to you, and this is not the time to suggest that it would be better to try harder to be like you. This is the time to let the asexual person control the conversation. The de-closeting may be something this asexual person has been gearing up for for months, and there may be quite a lot of nerves involved . . . it’s possible the asexual person has been preparing, and if you have been chosen to hear this message, your reaction probably means a lot. Make it a good one.

The final installment of this article will be continued in Part 3: What questions would we like you to ask, and what behaviors would we prefer you avoid? What assumptions would we caution you against making regarding us and others like us?