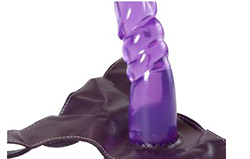 Also in the running was “BOB,” or “bend over boyfriend,” a phrase that actually predates the Savage vote by three years. In 1998, the first film in the Bend Over Boyfriend series was released: 60 minutes of educational info on the ins and outs of strap-on aided anal pleasure. Appearing in the film is Carol Queen, the staff sexologist at San Francisco-based sex shop Good Vibrations. “We knew it was time [to come out with the film] because so many male-female couples came into Good Vibes looking for strap-ons and information,” she told AlterNet. “It was clear that this was a practice that needed some informational support.”

“It was bound to generate interest. And indeed it did; for quite awhile, it was Good Vibrations’s best-selling movie,” she added.

2. Find the perks of the prostate.

“The prostate is a few inches in, toward the bellybutton side. Stroking, pressure and sometimes vibration can feel very sexy,” says Queen.

Harnesses are also available with some variety. Leather harnesses are one option, but they tend to be harder to clean. Nylon and fabric harnesses are two popular options because they can be machine-washed. Single-strap harnesses, which fit like a G-string, give you more control, though those who find them uncomfortable may opt for a two-strap harness.