There’s a lot that’s sex-related this year on Americans’ ballots—and yes, I am referring to the presidential election! But in some states there are other ballot choices that are relevant too, and Californians will be voting on a doozy: Prop 60. This purports to keep adult film actors safe by mandating that condoms be used during on-set intercourse. Safer sex—what’s not to favor about that? But voters should know that the people who are affected by Prop 60 are overwhelmingly against it, the individual behind this measure is a longtime foe of the adult industry (and an all-around controversial guy), and that the penalties for not complying target not just the filmmakers, but also any performers who have a financial interest in the movie, including webcammers and the indy and queer porn producers we at Good Vibrations are so fond of (since they are especially likely to both make and participate in their movies and adult sites). 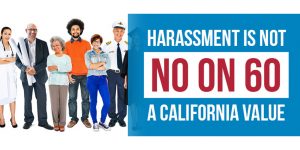 Why is Michael Weinstein, the man behind this initiative, so controversial? Head of the AIDS Healthcare Foundation, he has lost support among many HIV activists, most recently for his stance against PreP (pre-exposure prophylaxis, the medications that appear to prevent HIV from being passed from one person to another). His organization, which is the sole funder of Prop 60, also spearheaded a ballot measure like this in Los Angeles a couple of years ago, and before that he attacked the AIM (Adult Industry Medical) health clinic that was established by ex-porn performer Sharon Mitchell to test all “Porn Valley” performers. The adult industry’s history of frequent testing has meant that very few performers have been diagnosed with HIV, but that didn’t stop AHF from advocating AIM’s shutdown. Some speculated that AHF went after Dr. Mitchell’s clinic simply because Weinstein wanted that business. And, says the San Diego Union-Tribune: “The measure also includes a provision unlike any other on a ballot measure that we can remember. If Proposition 60 passes, but the state refuses to defend its legality in a court challenge, Weinstein would automatically be hired and reimbursed by state taxpayers to provide such a defense” [per Ballotpedia].

The LA Times called Prop 60 “heavy-handed”; the San Jose Mercy News points out that the state’s Democratic, Republican and Libertarian parties all oppose this “condom conundrum”; and the measure is also opposed by CA senator Mark Leno and the one and only Dan Savage, and many, many other organizations and activists. Oh, and by Good Vibrations!

It’s worth mentioning here too, perhaps, how much controversy swirls around the California initiative process, which allows anyone to collect signatures and put a proposed law on the ballot. While theoretically this put political power in the hands of the people, in reality the initiative process is frequently used today in a “David and Goliath” manner, with big businesses or well-established entities like AHF getting pet laws on the ballots and pushing for them.

By the way, TODAY is the last day California votes can register—fill out the online form before 11:59:59pm!

If you want to help pass the word about this measure, check out #NoProp60 on Twitter and follow @VoteNoProp60. Anti-Prop 60 activists tell you more at http://dontharassca.com. If you’d like to donate, you can do so here. 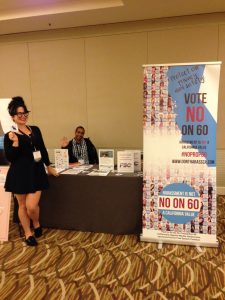 Want to hear from adult industry folks and legal experts? Good Vibrations and the Center for Sex & Culture cosponsor this info night the week before we go to the polls:

Center for Sex and Culture

Co-sponsored by Center for Sex and Culture and Good Vibrations

Austin Law Group is the premier queer adult entertainment law firm in the Bay Area. Austin Law Group was founded in 1996 by attorney Alex Austin. Alex earned a law degree from New College of California School of Law, the oldest public interest law school in the nation. Alex is on the legal referral panel for National Coalition for Sexual Freedom, Kink Aware Professionals, California Lawyers for the Arts, AIDS Legal Referral Panel and Transgender Law Center. Alex is a member of the Entertainment Section of the Bar Association of San Francisco, the American Bar Association’s Section of Intellectual Property Law, National Lawyers Guild, and Bay Area Lawyers for Individual Freedom. Austin Law Group strives to provide high quality legal services at reasonable fees, while maintaining an atmosphere compatible with the creative and adventurous nature of our clients.

Karen Tynan is a California attorney practicing in the areas of employment law and regulatory law and holds a B.S. degree in marine transportation from the United States Merchant Marine Academy. She advises and defends California employers and companies in civil, administrative, and regulatory matters. She works with clients throughout all areas of California including the Bay Area, Central Valley, High Sierra, Los Angeles, and San Diego area. Many clients have worked with the office for at least ten years with services ranging from defending wage and hour claims, defending discrimination suits, in-house sexual harassment training, compliance, and crisis management. Karen is licensed to practice law in the State of California, including the United States District Courts of the Eastern District and Northern District.

Shine Louise Houston is the founder and director of the San Francisco-based adult film company Pink and White Productions. She is a graduate of the San Francisco Arts Institute with a Bachelors in Fine Art Film and a former staff of Good Vibrations. Her work is internationally recognized for its cinematic quality and honest portrayal of LGBTQ sexuality. She was awarded the “Sylvester Pride in the Arts” by the Harvey Milk Democratic Club and the California Legislature Assembly, and was honored ‘Visionary’ at the Feminist Porn Awards. Her films have been presented at Stanford, Princeton, UC Berkeley, San Francisco State University, and the American Studies Conference, among others, and appear in the Human Sexuality textbook, A Taste for Brown Sugar: Black Women in Pornography, and featured on Emmy award-winning television series Transparent, on HBO NOW, and in exhibit at the Tate Modern Museum in London.

About the Center for Sex and Culture (co-sponsor)

The Mission of the Center for Sex & Culture is to provide judgment-free education, cultural events, a library/media archive, and other resources to audiences across the sexual and gender spectrum; and to research and disseminate factual information, framing and informing issues of public policy and public health. The Center for Sex & Culture aims to provide a community center for education, advocacy, research, and support to the widest range of people. 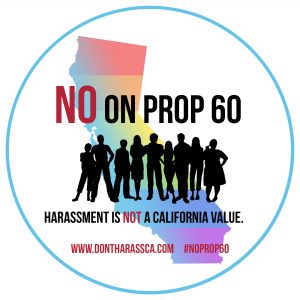