So what are Gateway Sexual Activities (GSA)?  I’ll give you a short list – please note there are lots more than this and I am fairly certain yours is different than mine…they certainly can be.  Let’s start with the following:

1) Home Tours of Modern Homes.  Hubba hubba.  The fantasy in my head of exchanging longing looks from across a crowded room of lookie-loos, thinking of having sex with a partner in this clean-lined environment.  *whew*  Fantasy does not need to be acted upon though – lots of times acting it out can ruin the fantasy a bit.  I suppose that puts a damper on the reselling of homes in America.

2) Men in Kilts.  Ok, this is a new one for me and it’s only come to light after obtaining my first ticket for Burning Man.  The image of a handsome, physically fit, down-to-earth, smart, and comfortable in his own sexuality man who can rock a kilt?  Let’s just say I am REALLY looking forward to the eye-candy on the playa.  😉 And here so many hetero/cis-men are afraid of wearing a skirt.  Too bad.

3) Men in Tuxedos.  Uh oh.  What does this mean for those political Black Tie State Dinners?  Perhaps this comes from my interest in Bond Movies (Live & Let Die was my first.  A nod to Jane Seymour.) but James Bond is automatically the image that comes to my head of a man in a tux.

4) Men in Uniform.  Maybe this is why the U.S. Military Industrial Complex doesn’t want gays in the Military?  Well, don’t let me in either.

5) Comic Book Hero Movies.  It’s easy for me to be turned on by being in a dark theatre, Robert Downey Jr. on the screen, cutting-edge technology.  *shudder*  Thinking of these as GSA puts a potential crimp into that Summer blockbuster movie schedule, no?

6) Shopping for Produce.  Cucumbers, carrots, and zucchini…Oh My!  Do we have to put covers on the vegetables in the grocery store or at the Farmer’s Market to cover up their nakedness?  Wait, wasn’t it the Victorians who were so “dirty-minded” they started to use tablecloths because table legs got them hot?  Sploshing doesn’t apply here because the produce is firm and not slippery, slimy, or spreadable. <–which leads me to… #7.

9) Discussing Food.  I wasn’t aware of this one until I started dating again.  Thanks to spending time with a Chef I learned how hot it was to hear certain words in their vocabulary.   Hello baste, braise, and marinate!  Now I understand why people spend so much time watching the Food Network. 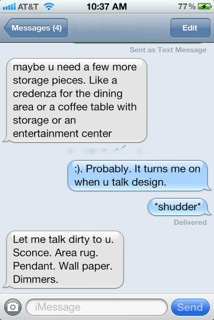 10) Discussing Design.  Thanks this time to an Interior Designer.  (see pic)

I think it’s important to note here that things people typically expect to be “hot” or lead to sexual activity don’t.  For example, lots of people think that going to a nudist beach could or would lead to GSA.  That could not be further from the reality – at least where I’ve been.

I hope you know me well enough to understand that I’m writing this completely tongue in cheek.  These so-called “Gateway Sexual Activities” I’ve listed are some of the fantasies of mine – some of them were surprises to me as I wrote this.  I don’t want politicians to eliminate any of the above items or to prevent “us” from teaching about any of them.  I do, however, want the politicians to acknowledge how ridiculous it is to think certain activities lead to sexual behavior AND once you do one activity you cannot stop from moving on to the next.

Do not be afraid of Fantasy.  My best friend told me she grew up hearing the phrase “there’s no such thing as bad thoughts, only bad actions.”  I think that idea is right on.  Acknowledging these fantasies and moving on is healthier than ruminating or obsessing about them.  Remember: Acting on fantasies isn’t always the way to go either.  As I said in #1 above, lots of people indicate that acting something out doesn’t live up to the expectation or anticipation either.  We shouldn’t be forbidden from fantasy nor be made to think that fantasizing is wrong.  To do so is part of the problem.  Let’s teach our youngsters that fantasy is ok, yours might be different from mine and that’s OK too.  In the grand scheme of things, they do NOT lead to sexual activity…unless YOU (and your partner(s)) want it to.