Fooling Around: How I got into Clown Sex

If you’ve seen me on Facebook, or at Kinky Salon London or San Francisco, or Gay Pride, or Artwank, or at Chantilly Lace, you’re probably aware I like being a klown.

I like being a klown a whole lot, actually.

And I figured maybe it was about time I talked a little about how, and why, I got into this whole Sex Klown thing.

It started years ago with a lover I had who had a really weird fetish (like many of my personal explorations). Anyway, he was hot, and a really fun, playful Dom, and so I figured it was worth it to try out his big kink and see for myself if there was anything in it for me.

So I asked about his big secret.

In fact, it was kind of awesome. Having been Goth, it wasn’t too much of a hop skip and jump to clownface, after all. And there was something about it I found really interesting- the sex, for example, immediately became more ridiculous and silly, simply because we were in whiteface, smudging it around. And clown sex interacted so well with other kinks- floggings with a rubber chicken, or sploshing with custard pies, or ballgags made of juggling balls all added a novelty to the kink I was used to. Playfulness in sex, especially kinky sex, was and is a huge turn on for me, especially if you can keep me guessing as to what might happen next.

In spite of being a loudmouthed instigator, I’ve never really considered myself a performer in the intentional sense of the word. I mean, I got the idea of performing gender, and played up femme for sure, but that was a mild, everyday performance, nothing like getting on stage or interacting with a heckling public. As much as I admired the quick wit of British humor, I didn’t have faith in my own ability to be clever spur of the moment. 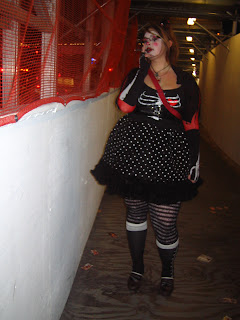 But then I started going to things like Gay Pride in whiteface. And going to Las Vegas with my then-girlfriend, on NYE, both of us in full clowning moods. And suddenly I realized that just creating a clown persona was a performance, and that interacting with people as that persona felt not only natural but incredibly fun.

And then I started doing storytelling at Bawdy Storytelling in San Francisco, and I realized I COULD perform, I could ad-lib, and people would actually laugh!

And so Faggette was born, for political rallies and marches, for lightening up really dark, angry situations. I had already been doing similar things just as myself marching at rallies in ridiculous outfits with signs meant to make people laugh as well as think.

I must now happily note that the photo you see here was at the anti “Walk for Life” rally in SF, and is listed with other photos on a right wing site with this warning:

And how about the radical images of the most radical members of the left that ZombieTime.com has been able to capture and document over the years. Here are just a few of Zombie’s most disturbing pictures (WARNING: These pictures contain nudity, explicit language and disturbing messages!)

But the whiteface added a new, ridiculous level to the work I wanted to do. Faggette is a clown in the tradition of the Court Jester:

The fool’s status was one of privilege within a royal or noble household. His folly could be regarded as the raving of a madman but was often deemed to be divinely inspired.

And that was all great.

But I wanted more.

Mainly, I felt myself really constrained by how serious my sexyfuntimes were getting. Every time I went to a kinky party, particularly in the UK, I felt surrounded by people in uniforms, stilettos and stern faces. “Sex is supposed to be fun” is something I say a lot, to myself and others, and while it WAS fun, in a way, it also felt really… well, cliche, and boring. And I was sick of wearing red and black.

So I tried taking Faggette to parties. And frankly I think some people were terrified. Other people were really confused. Partially that was because clown sex is still kind of in the closet (or would it be tiny car?) and partially it was because I realized that my energy as Faggette wasn’t quite right. A political clown, sure, a sharp-tongued clown definitely, but a clown that had sex in public? Probably not. 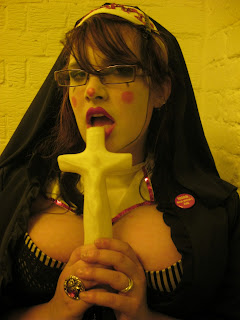 She’s still in development, her makeup especially (an important part of clowning for sure), though she is at heart a black and white klown with the occasional red highlights and her loving chicken “Chokey” at her side. But she’s getting there. It’s getting to the point where she might need her own Twitter stream- people keep asking her out to parties and texting me to send messages along. I might end up having a personality crisis.