The first time I met Shilo was at my apartment. She was there to photograph me for The Sex Positive Photo Project, and having two drawers filled with “for photo shoots and sex only” outfits and shoes I was thrilled to be her model. After a bottle of pink moscato she and Airial Clark (who you may know as The Sex Positive Parent) were photographing me in a naughty maid’s uniform (and then wearing a halo while I tit-fucked my magic wand emblazoned with the word “JESUS” on it), asking me questions like “do you have any idea how great your ass looks from this angle?” Shilo does the revolutionary work of photographing fat girls in various states of undress, and recently I discovered the revolution doesn’t stop at fatties. At a recent event at the Center for Sex and Culture in San Francisco I met up with Shilo and she told me about another project of hers: Hanky Flowers. Intrigued? I was! I sat on the sofa of CSC tipsy from my one plastic cupful of Trader Joe’s chardonnay in open-mouthed, delighted awe as she regaled me with the deets. I decided to interview Shilo about Hanky Flowers and let her tell the story:

Virgie: What inspired Hanky Flowers? And how did they come about?

Shilo: They came about because I discovered a “Femme Dilemma” in the Leather Femme community. Namely, how does one flag the Hanky Code without back pockets, or any pockets at all? There have been many solutions for this dilemma over time, such as tying a Hanky around an ankle, wrist, or tucking one into the top of a corset. When I turned them into flowers that can be worn in the hair (or clipped on a corset or boot or lapel) that was just another solution, one rooted in the spirit of Femme Visibility, in particular. I love crafting for the community – it’s very much a labor of love for me. On a sociological level, I’m also very interested in non-verbal communication cues, which is essentially what the Hanky Code is about. I’m fascinated with the history and evolution of the Hanky Code, and I’m currently putting together a presentation/class about the History of the Hanky Code and flagging.

Virgie: Tres fascinating, Shilo! Do you have any amazing Hanky Flower stories? What kind of responses do you get from people when they are introduced to them?

Shilo: I’ll never forget the first time I actually wore a Hanky flower to a (non-kink) storytelling event in SF. A cute butch came up to flirt with me at intermission and opened with “So, I see you are flagging on the right…” I was so flabbergasted that they actually WORKED that I forgot to flirt back!

Bethie Bee, Ms. SF Leather 2011, told a story about Hanky Flowers at Bawdy Storytelling during a Butch/Femme themed night. She gave a “public service announcement” on how to use the flower for flirting purposes, or how to “hit the butch upside the head with a clue by four,” as she put it. Here’s the video of her story.

I have had such awesome interactions with people when I am vending my KinkyCraft wares in person. Selling at my first International Ms. Leather event, last year, I had so many people come up to me and thank me for what I was doing. I even had one handsome butch, with a femme on her arm go out of her way to come into my booth and look me in the eye, point meaningfully at me and say with a choked up voice “Thank you for what you are doing”, then moved on. That was when I realized how important Femme Visibility is, how important it is for me to be able to share the message to Femmes out there that “I see you and you belong here.” I feel like I am not only “femming” the Hanky Code, but I am continuting the “queering” of the Hanky Code (which has its origins in the Gay Leathermen’s community).

I believe in a world where DIY aesthetic meets Kinky functionality.

I believe in the power of creativity.

I believe in femme visibility.

I believe in dashing dandies, bears, butches, mommies, daddies, littles, genderqueers, my trans brothers and sisters and anyone else forging their own path through (and sometimes in spite of) this crazy vanilla world.

I believe in Sex Positivity.

I believe in honoring Leather tradition while creating bridges toward inclusiveness.

I believe in nurturing community.

But most of all, I believe flagging is a conversation starter and we should all be talking to each other a whole lot more.

Queer women who present as feminine (Femmes) are often assumed to be straight because of their apparent adherence to socially-constructed male/female gender conventions. It can be hard to find each other and to be identified by other queers, even, causing the sense of invisibility. That problem extends to Femmes in the leather community, of course, but there is an added level that I’ve heard about from many women. It’s the problem of being respected or taken seriously, in particular if you are a Femme Top. There is often an inherent misogyny in the Leather Community, even within the queer Leather Community and one tool for combating that misogyny is solidarity with other Femmes (of all genders) and to find Allies in the community. As one woman told me, about why she wears Hanky Flowers: “There’s the obvious benefit of being able to advertise what you are into without having to compromise what you are wearing by trying to wrangle up something with pockets. For me, there’s an added benefit in that I feel that not only am I advertising that I am into a particular kink, I’m also advertising that I am Queer, that I am Femme, that I am Leather.”  To me, it’s also a way for Femmes to say to one another “I see you, and we belong here;” it’s about Femme (and Femme Ally) solidarity.

FYI: Sinclair Sexsmith wrote this piece about Femme Visibility, which I think is well worth the read:

Virgie: How do the flowers work? Can you break down some of the technical stuff in terms of how they work when you’re out cruising/booty-fishing?

Shilo: Well, they are used just like regular hankies when flagging the hanky code. Different colors indicate your interest in different activities. Black is Heavy S(ado)M(asochism), Light Grey is for Bondage, for example. Flagging on the right side of your body indicates that you are a “bottom” or receiver of that activity and flagging on the left indicates you are a “top” or giver. It’s important to point out that consent is not implied. Flagging is meant as a conversation starter, a gateway for flirting or negotiations for play. Some people have a tradition of earning their hankies, which turns them into a special trophy, a badge of honor. Hankies can be infused with a lot of meaning. For my Hanky Flowers, a leaf of a second flagging color can be added.  A recent development for me is that all my Hanky Flowers now come with snap-on leaves which means that someone can change out the second flagging color to suit their plans for the evening, or based on who they are cruising for, their mood, etc. Which makes for maximum flagging versatility! Hanky Flowers can be attached to hair clips, lapel pins, rubber band hair ties. They can easily be clipped or worn alone or in bunches to hair, corsets, boots, just about anywhere. I also have done custom orders for headbands, special rose-bud style lapels, long-stemmed flowers and for any color/fabric combinations you can think of. People are very creative when it comes to flagging and I just adore working with someone directly to create just what they are looking for. I also make hanky bowties, garters and more – I’m always coming up with new creative flagging solutions.

Virgie: Ok, big question: where can people buy them?

Shilo: You can buy them at kinkycraft.etsy.com, or from me in person here in the SF Bay Area. I’m happy to do in-person meet ups to sell flowers to local folks – especially anyone needing to prepare for Folsom Street Fair! I can be contacted through my etsy.com store or at kinkycraft@gmail.com. I also vend at events from time to time, most recently at the Femme Conference 2012 in Baltimore, where the Hanky Flowers were very well received!
Thanks, Shilo, for creating femme, leather and queer visibility (and flirting ops) one Hanky Flower at a time! 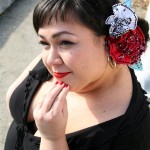 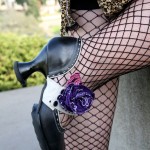 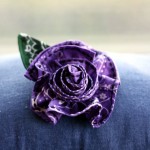 Virgie Tovar is the author/editor of the upcoming fat positive anthology Hot &Heavy: Fierce Fat Girls on Life, Love and Fashion (Seal Press, November 2012). She holds an MA in Human Sexuality, is certified as a sex educator, and was voted Best Sex Writer by the Bay Area Guardian in 2008 for her first book, Destination DD: Adventures of a Brest Fetishist with 40DDs. After teaching Female Sexuality at UC Berkeley she went onto host The Virgie Show (CBS Radio) from 2007-2008. When she’s not teaching sexuality seminars or shimmying as her burlesque alter ego, Dulce de Lecherous, she is creating content for her video blog: Virgie Tovar’s Guide to Fat Girl Living. Virgie has been featured on Playboy Radio and Women’s Entertainment Television. She lives in San Francisco.