Are you exhibiting any of the following symptoms:
–Trouble sleeping?
–Fluid retention?
–Irritability?
–“A tendency to cause trouble”?

Let’s see, according to my medical book, circa 1895, you have a clear-cut case of Female Hysteria. (Men with similar symptoms will need to diagnose themselves with some other old-timey disease. May I suggest “dairy fever” or perhaps “dropsy”?)

In the 19th century, as many as 75% of middle-class women were estimated to suffer from hysteria, but luckily medical science was there to help them. Doctors treated hysteria with “pelvic massage” until the patient reached “hysterical paroxysm.” In modern times, we know “pelvic massage” to be “the doctor jerking off his patient” and “hysterical paroxysm” to be “orgasm.” The procedure as a whole is now known as “grounds for a lawsuit.”

Doctors of the day were happy to provide such a treatment, as it provided a steady stream of paying customers (patients were advised to come in weekly for their treatments). It was all good, except for one thing, doctors found the actual manipulation of their patients genitals to be tedious and tiring. According to the highly entertaining Wikipedia entry on Female Hysteria:  “The technique was difficult for a physician to master and could take hours to achieve ‘hysterical paroxysm.'” (The physicians’ widespread befuddlement at mastering these basic lady-pleasing skills puts Marrying a Doctor much lower on the To-Do list.) 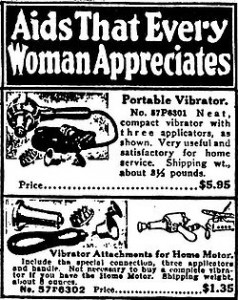 The doctors were saved from the arduous task of trying to make these damn women come, already, by the magic device, the vibrator. The first of these “massage and vibratory apparatus” was patented by American physician (USA! USA!) George Taylor and was–and I can scarcely stand to type this–steam-powered. (The resulting billowing smoke making this perhaps the least discreet form of masturbatory tool.) Soon, physicians’ offices were outfitted with electric vibrators, allowing doctors to get the job done in a matter of minutes instead of hours, and allowing most of mankind to stay blissfully ignorant about female orgasm until about the 1960s.

By the early 1900s, these miraculous health-giving electric vibrators started showing up in the American women’s home. In fact, vibrators were one of the earliest electric home appliances invented, showing up ten years earlier than the vacuum cleaner or iron. Regular old, non-pervy companies like Hamilton Beach and Sears Roebuck were in the lucrative business of selling vibrators to housewives. The photo at left, for example, is from the 1918 Sears Roebuck and Co. catalog. “Very useful and satisfactory for home service,” it says, vaguely, hoping you get the idea. 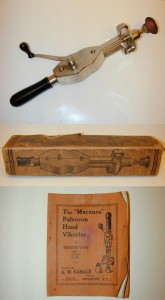 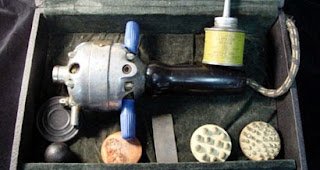 I mean, Good Lord! The giant motor! The thick cloth covering the cord! And is that an oil can in there? The Type A looks loud–roaringly loud, jackhammer loud. But most importantly, electricity back then was scary. I wouldn’t even be brave enough to use a toaster from those days, much less put some shorting-out, spark-shooting, scary new-fangled doodad on my nether regions.  I don’t care how “wonderfully refreshing” it’s supposed to be.

As all this new information (scary old vibes! hand cranks! hysterical paroxysm!) rattles around in my mind, I find that I keep going back to the 19th century doctor’s office and this strangely sexless sex between doctor and patient. Were either of them aroused by what was going on? Did the females see the doctor breaking out his Hamilton Beach 4000 or whatever and feel a thrill of anticipation, or just the kind of dull disinterest one would experience while watching a mechanic change the car’s oil. And I wonder about the women’s orgasm. If they were not told it was pleasurable, did they experience it as pleasure, or as just a release, akin to finally getting to pee on a long car trip?  And not to be all zen koanish or anything, but is non-erotic sex that is not recognized by either party as sex indeed sex?

I write In Bed With Married Women, a blog about sex in all its boring, funny, strange, smokin' hot glory. Before I got all smutty, my work appeared in Rolling Stone, Jezebel, Entertainment Weekly, Mad magazine, Time Out New York, Games, the Los Angeles Times, and the occasional boring reference book. My music column for the now-defunct Ann Arbor News won an award from The National Society of Newspaper Columnists. And this is kind of off-topic, but I once interviewed John Cusack and can report that his breath was minty.