(Even sex has a hard time competing with Rachel Maddow.) SXSW TechSex!

When I told you I was helping to keep Austin weird, I did not realize that this slogan had to do with a city campaign to keep big-box stores out of the city.

Now it’s a sort of corporate slogan in and of itself, since every hotel and all airport shops will outfit you in a T-shirt! So it goes. My hotel gift shop, close in to the SXSW epicenter, is also full of swag featuring bats; that didn’t parse until I was out on the hotel deck, which overlooks Lady Bird Lake, at dusk with my co-panelist (and CineKink mastermind) Lisa Vandever. We started noticing hordes of people lining the nearby bridge, coming on to the deck, massing the bike paths — and then a ton of bats flew out from under the bridge! So it turns out half the hotel guests were there for SXSW (or, as all the In Crowd call it, South-By), and the rest were there to love on the little winged mammals. There were a guano-load of them! And apparently this is off season. They’re Mexican free-tail bats who come to Austin in March to have their batlets in the summer, and they fly south again in the fall, and if you show up in August there are literally a million of ’em — or more.

But that wasn’t all the big fun I had on Monday at South-By. That was twofold: I went to a presentation called, Hey, Where’s My Robot Girlfriend? Medical anthropology researcher and doula Laura Duncan presented a fabulous slideshow (complete with a video clip of Data from “Star Trek: Next Generation” assuring a gal who looks very interested that he is FULLY functional). The cultural attitudes about erotic robotics are fascinating: have you ever wished for a robot partner? Including the notorious (but non-robotic) Real Doll, not to mention all the sexy and mostly slim and Caucasian lady robots we see in the movies (each sexier than the last), it appears that hetero men will have humanoid girly-robots to look forward to, while women are more likely to be pleasured by sex machines that don’t look a thing like real people. Is that the way we want it? Who knows? Laura’s presentation was thought-provoking and fun, and made me want to corner her later to tell her about the winner of out long-ago Sex Toys You Wish Existed: Millennium Contest, which was won by an inventor envisioning the day when we will be able to record sexual experience and replay them for ourselves and others. Hack a robot with THAT software! Ahh, the future is sweet.

I had made a date to host a Sex-Positive Soiree (and then do an erotic reading) at the wonderful Vortex Theatre — Austin’s alternative repertory house. I’ve actually done a gig there before — years ago I went along on the Sex Workers’ Art Show Tour and we passed through on our way to New Orleans. The Vortex now has a lovely bar, the Butterfly, the locus of this shindig that was meant to mix Austinites with the gang who’d come to town for South-By. We were going to commence at 6pm on Monday. But I couldn’t get a taxi to get out of downtown! Really, I have pretty much never seen anything like it. All of SXSW seemed to already be in cabs, and there were none to be had. But the indispensable Julie came and got Lisa and me, so I wasn’t too late for my own party. And it was big fun! The Mayhems were there, as was Cunning Minx, Laura “Robot Sex” Duncan, Buck Angel (a film about him premiered at South-By, which I didn’t get to see), plus his lovely wife Elayne. Bunches of great Austinites from the theatre and from Bedpost Confessions, their sexual storytelling series, too. I read a few stories and they were a terrific audience.

And then Lisa and I went back downtown and got a table at the Roaring Fork — we were famished! Brenda Goodman joined us there — she’s a USC professor and noted producer who’s currently finishing up a documentary project called SEX(ed) The Movie — I am one of the commentators in it, and I had a great time in LA with her last year doing the shoot. I wanted to introduce her to CineKink producer Lisa, and was happy to hear that the movie is coming down the home stretch. Look for it by this fall!

By the way — we had a hashtag for our New Tech, Old Tech, Same Old Sex panel on Sunday, if you want to tune in to the comments: #techsex. And Laura Duncan’s robot panel hashtag is #sextech!

We did not have tons of people at our panel because we were opposite Rachel Maddow, and even sex has a hard time competing with her. (Rachel, that’s a compliment, honest.) 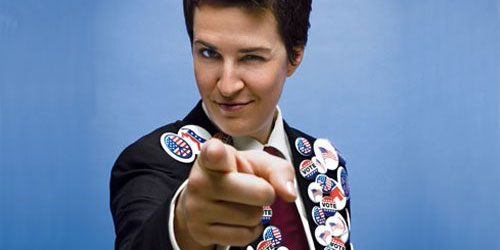 But it was a terrific panel anyhow, and a fine young South-By geek seems to have recorded it. So when it’s a podcast available to be listened to on your futuristic device, I’ll let you know.