Educating About Sex In A Rape Culture

Part on an ongoing discussion for Dr. Carol Queen’s call for a Summer of Consent, as written about here. #SummerOfConsent

Full disclosure: The words you are about to read are from a person who identifies as a feminist, is a board certified sexologist and sex educator who through education and communication wants all people to have happy, healthy, pleasurable sex lives, who is a mother of children, and who was once raped.

It’s been a while since I’ve written a blog as The MamaSutra; this one in particular has taken me nearly one year to feel ready to hit “send.” The issues herein (sexual assault, “rape culture,” media influences on same, consent and boundaries, etc.) continue to garner spotlights in our news and politics. One recent occurrence came in January 2014 when the White House issued A Renewed Call To Action and the “1 is 2 Many” Public Service Announcement about Sexual Assault on campus. Doing so seems to have made this issue a political hot topic. I know this is a really sensitive issue that riles up a lot of emotion and opinion. Everyone is absolutely entitled to his/her/hir emotions about this topic, but I have colleagues who have experienced extreme hostility after writing about this, for both themselves and their families. Knowing this has made me question whether to publish this anonymously or not. THIS is why it has taken me a year to publish.

This is a two part series. In this first post, I will tell you situations I believe contribute to the American society being a Culture of Humiliation & Disrespect (I prefer this phrase over what others call a “Rape Culture”). For the purposes of this blog, my definition is as follows:

1. A culture that mutely and blindly refuses to acknowledge behavior that supports victim blaming and protects abusers and rapists,

2. forgets to look at the causes that lead to the acceptance of violence against others, including rape, in our society,

3. sexualizes or punishes other beings for being just that — something “other” — and

4. refuses to see the humanity of others by reducing them to mere objects or body parts.

In order to describe how I think we got to where we are today, let’s start with some basic ingredients:

So where do people see this humiliation and disrespect in action?

Let’s review a couple of examples looking through the eyes of a young person who has never had sex ed or has never learned some basic concepts about boundaries or consent (because let’s face it, even if you have had basic sex ed, were you also taught about communication? Consent? Respect? Pleasure? Fantasy?)

Situation 1.  This person watches season 2, episode 1 of “Don’t Trust The B—- In Apt 23.” Six minutes into this episode the main female character muses about how fun it is to shoot a hot guy with a tranquilizer gun and hear his body hit the ground, then this character says dreamily, “Tranq Sex: it’s consensual.” 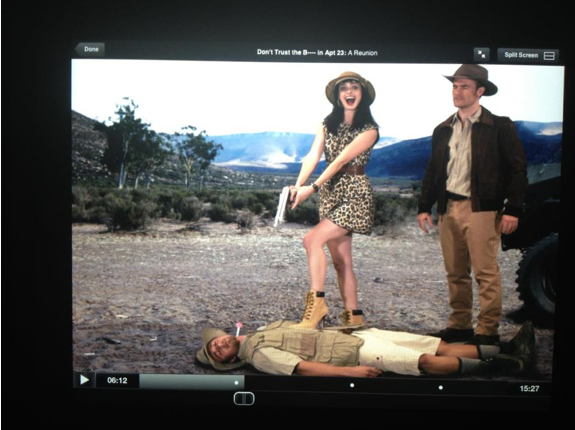 I’m sorry, but NO!! No one points out what was just said was WRONG or why. Does anyone point out that tranquilizer sex is the opposite of consensual and that it constitutes rape?  No. It gets the laughs and they move on. Perhaps it was funny or acceptable because it was a woman saying it and not a man? Well, it wasn’t funny to me. I was horrified. Think of the kids who saw that and the implied message they received absent any redirect.

Situation 2: This person watches the movie “Bachelorette” (2012) starring Kirsten Dunst and Isla Fischer. In this movie there’s a character, Joe, who has been long interested in Isla Fischer’s character Katie (ah, high school unrequited love). Forty-three minutes into the movie, they are all out late partying at a strip club. As they are leaving, the player-type guy friend tells Joe that Katie (who is puking and falling down drunk) is “G2G — Good to Go, so just take her home and slip it in.” Joe replies, “I am not going to ‘slip it in,’ she is wasted, that would be like rape” (side note: WTF?! “…would be like rape”?? THAT IS RAPE!). This guy friend gives Joe a bottle of pills and Joe whispers to ask if the pills are date rape drugs. The player guys tells him loudly no, it’s Xanax for him to take so he won’t be so paranoid.

Um, okay, can we agree that this situation is also clearly giving a really disturbing message? No one in the movie addresses why any of that is messed up. The message is that the MAN is supposed to numb himself so he doesn’t have to feel bad for raping a WOMAN who can’t give consent herself because she is clearly intoxicated. Can anyone describe that to me differently?

(Side note: I don’t even look for these examples anymore. It’s like they find me. Either that, or this stuff is so prevalent that no matter what I do watch I see it. This scares me because I don’t watch TV much. Really. Someone else will have to tell me if I’m off-base; that this is only a chance happening that I’m stumbling onto these examples as often as I do… But I really doubt it.)

This stuff is cumulative.

Let me say this very clearly: I believe it is absolutely irresponsible for our society to provide the “entertainment” content we do under the guise of “humor” when our youth is not ALSO exposed to accurate, honest education around sex and sexuality. How does anyone understand that something is or is not funny if they don’t also understand the message behind it? This education is not just for children. I know plenty of adults who have difficulty with not only their emotions, feelings, and thoughts about sexual behavior, but also need to understand the nonsexual components behind sex, love, and relationships. Our understanding of this does not get better when a solid foundation hasn’t already been laid.

Why do I think some guys rape?

The men I am going to describe here — and I’m only going to address the men here, because women do rape as well — are the ones where the words “nice guy” have been used (see also the teens in the Steubenville rape trial). I am NOT addressing the clearly sociopathic ones, but I will touch on that later.

There is a blog that came out not long ago which says there are two kinds of rapists: “Sadistic and opportunistic.”  I believe there are more than just the two kinds of rapists as that blog would have us think. This binary thinking around rape is bogus (just like any binary thinking about gender, sexual orientation, the range of sexual behaviors, etc is bogus). I believe it’s a spectrum like most things. And none of the rape spectrum is good. I know there are sociopaths who are on their way to more violent behavior (like murder).  There are other men who just don’t care what women think and want to take what they think is theirs to take, but who aren’t necessarily on their way to murder (a result of our objectification of women and/or the goal-focused approach to sex — aka “get in, get off, get out”). But there ARE also men who truly don’t know or who aren’t aware of their behavior to know that what they are doing is wrong or a bad thing (Steubenville?).

The TV and movie situations listed above are only two but part of a much bigger machine that fails to inform. I think we can use these and other examples to help us identify why rape may be happening right in front of us. It seems because what happened in Steubenville was not the “violent” form of non-consensual sex it was not seen as rape. Does this happen just because we have failed as a society to inform our population accurately about the importance of good sexual information? Whose fault is this? Is fault even the right concept? Some people wish others would stop blaming and getting angry but that is part of the healing process. It’s hard and lots of people don’t know how to move through that with grace and responsibility. But no matter where you are in your journey, the thing that needs to be addressed is “How do we fix this?”

How do we transform this culture of humiliation and disrespect?

I mentioned earlier that I am a victim of rape myself. I am not comfortable describing that situation here. I will, however, tell you about another story that happened to me not long ago.

TRIGGER WARNING:  A guy I was in a relationship with had had a few drinks (I would say he was drunk, but he and I disagreed on what “drunk” was. Normally I’m up for sex but we had been arguing about something and things surrounding that issue had not yet been resolved. When we went to bed he wanted to have sex (I did not). I was laying on my side turned away from him. He proceeded to pressure me; pressing up against me, rolling me over onto my back, and clearly presenting -ahem- that he wanted to have sex. Besides my body language, I told him verbally that I wasn’t interested in having sex, told him to go to sleep, yet he persisted. It got to a point where I got so pissed off that I sat up and said “Knock it off! If you don’t stop right now, you will be raping me!” He stopped immediately, appeared a bit disoriented, mumbled (apologies?) and passed out.

I was very upset and called a girlfriend the next day to tell her what happened.

It gets better: I had a follow up conversation with him and he did not remember the situation at all.

At one point in my time with him I cared for him very deeply. He seemed to be a good man and father himself. I will say it again: to all outward appearances this person seemed like a good man, but if I may suggest, a little unaware and numb. I do not believe this person is terrible nor unredeemable. But this example fits the behavior of a person who had absolutely no sex education in their entire school career (which he did not). So where did he learn about sexual behaviors, pleasure focused intimacy, consent and boundaries? Where does anyone, who doesn’t get the education from a good sex positive source?

In the next blog post, I will detail my suggestions for What We Must Do To Eliminate Rape Culture.