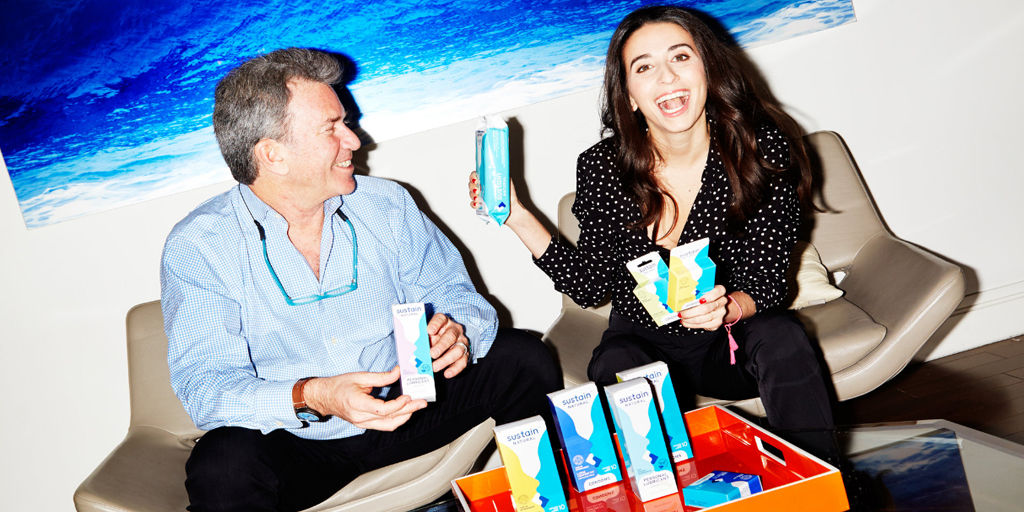 Jeffrey and Meika Hollender, the father-daughter team behind Sustain condoms

A dozen employees at Ricky’s, a beauty shop in downtown New York, huddled below a display of lustrous wigs. Around them, hair irons, press-on nails and makeup kits were stacked to the ceiling. But on this morning, the clerks had gathered to learn about an unusual new item on the shelves: nontoxic, eco-friendly vegan condoms.

Meika Hollender, the co-founder and co-chief executive of Sustain Natural, addressed the crowd and showed off her wares. The latex in Sustain condoms comes from a Fair Trade rubber plantation in Southern India, she explained. The factory is solar powered. And the condoms are free from nitrosamines, possible carcinogens found in many popular brands.

With Sustain, Ms. Hollender is trying to do for the contraceptive industry what brands like Honest Company, Mrs. Meyer’s and Seventh Generation have done for cleaning products — introduce all-natural alternatives to household staples such as diapers, hand soaps and paper towels.

That’s no coincidence. Jeffrey Hollender, one of the founders of Seventh Generation, is Meika’s father and runs Sustain with her.

“Growing up, my dream was to start a condom company with my dad,” Ms. Hollender, 29, quipped to the staff at Ricky’s.

Seventh Generation was an instant success, hitting $8 million in sales within three years of its founding in 1988. But the market for condoms is much smaller than the market for diapers and soaps. And three years after founding Sustain, the Hollenders are working to overcome some early missteps — and a fickle consumer base — as they try to make their eco-condoms mainstream.

Mr. Hollender, 62, decided he wanted to start Sustain while he was on a surfing trip. After founding Seventh Generation and building revenues into the hundreds of millions, he lost control and was forced out by his partners in 2010.

On the beach, contemplating the meaning of life and what he should do next, he zeroed in on condoms. Condoms, he figured, were a product that hadn’t yet gotten the full environmental treatment. And he knew that they were an inherently sustainable product — latex is made from the sap of the rubber tree, an endlessly renewable resource.

Mr. Hollender initially wanted to call the company Rainforest Rubbers. Meika, who was working in the consumer products industry, persuaded him to go with a name suggested by an investor: Sustain.

To give the new condoms additional ecological bona fides, the Hollenders focused on eliminating nitrosamines. Common chemicals that are present in everything from processed meat to balloons, nitrosamines have been found to be carcinogenic in large doses. And while only minuscule amounts are found in most products, including condoms, the World Health Organization recommended that condom makers minimize nitrosamines in their products.

The Food and Drug Administration monitors the presence of nitrosamines in various products, but has not banned them outright. As a result, they are found in small doses across a wide array of products.

The Hollenders hired a former employee at Durex, another condom brand, who had figured out how to make nitrosamine-free latex. And they found the rubber plantation. Finally, for the small number of stringent vegans who try to avoid using any animal products at all, Sustain removed casein, a milk protein commonly found in traditional latex condoms. 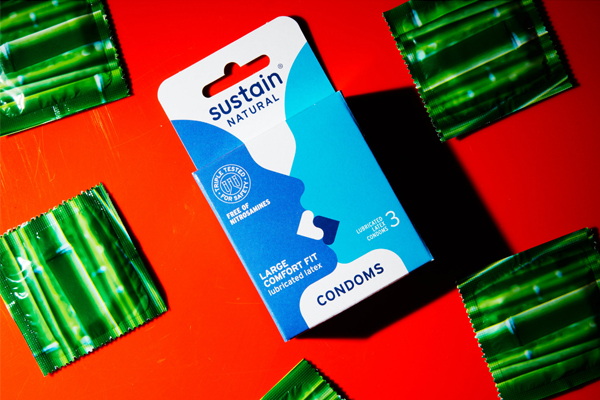 The packaging for the condoms was also redesigned.

“We’re like the Seventh Generation for your vagina,” Ms. Hollender said at Ricky’s.

But vegan condoms are shaping up to be a more difficult sell than recycled paper towels. The Hollenders approached more than 25 venture capital firms looking for backing. All of them said no. Instead, the Hollenders have used their own money and funds from friends and family. Three years after founding the company, sales have topped $1 million annually, and big stores like CVS and Target are carrying their products, but the brand has yet to really crack the mainstream.

Coyote Amrich, the director of purchasing and product development at Good Vibrations, a chain of sex shops, said more customers were asking for Sustain and other environmentally friendly brands.

“There’s a growing environmental awareness,” she said. “But does that mean everyone wants to know if their condom is vegan? No.”

Sustain is not the first condom of its kind. Glyde, a rival brand, also makes vegan condoms that are certified as Fair Trade, a designation used by manufacturers to connote sustainable farming practices. And certain varieties of the major condom brands, including Trojan, Durex and Lifestyles, also are nitrosamine free.

What’s more, the Hollenders have come under fire for what critics describe as dangerous alarmism. Shortly after founding Sustain in 2014, the Hollenders funded a report by two nonprofit groups, the Reproductive Health Technologies Project and the Center for Environmental Health, that evaluated nitrosamine levels in condoms. Then Sustain started a petition encouraging the F.D.A. to ban nitrosamines from condoms, and its Twitter account posted a separate video titled “Are Condoms Killing You.”

The backlash was swift, with bloggers attacking the Hollenders and writing articles with headlines including “Cigarettes Cause Cancer; Condoms Don’t.”

“They came into the condom industry hoping to change the market, maybe not understanding that some people had already carved that out,” Ms. Amrich said. “The market is ready for them, but they’ve had some challenges.”

Today Ms. Hollender has tempered her message. “I’m not saying condoms cause cancer,” she said in an interview.

Yet Sustain still touts the fact that its condoms are free of nitrosamines on its packaging. “This is what resonated with consumers,” said Ms. Hollender. “Maybe because it’s a big, scary chemical word.”

Sustain sells more than just condoms. It makes a personal lubricant that uses aloe, instead of petroleum, as its base. That change can help women avoid bacterial vaginosis, an unpleasant infection that can make women more susceptible to sexually transmitted diseases. And the company is also marketing “post play” wipes, made with cotton and organic ingredients.

Hoping to jump-start sales, Sustain this month is changing its packaging. Instead of the previous boxes depicting stones, rivers and bamboo, the new logos feature an illustration of two people kissing.

The update suggests that Sustain is learning, Ms. Amrich said. “You don’t market condoms the same way you market paper towels,” she said.

At Ricky’s, the clerks were receptive to Ms. Hollender’s message, and Sustain condoms were displayed prominently next to the cash registers.

“A couple of the managers are vegan,” said one employee at the store. “So that helped.”