Do The Clothes Make The Kinkster? The New Folsom St. Fair Poster

The folks who run Folsom St. Fair just released the poster for this year’s event, and it’s thought-provoking and inspiring. They’ve always had amazingly sexy posters, but it’s really fun to see something that makes me stop and think about the message.

According to an interview at the Bay Area Reporter’ site:

Demetri Moshoyannis, Folsom Street’s executive director, said in a statement Wednesday, May 9, “For this year’s poster, we want to pose the question: What makes someone a ‘leather’ person or a fetish enthusiast? Without the aid of our clothing, it can be impossible to tell who is into what kind of scene. We want to showcase the community from a truly stark, bare perspective. This is who we are – exposed. At the same time, we are asking that age-old question: What are you going to wear?” 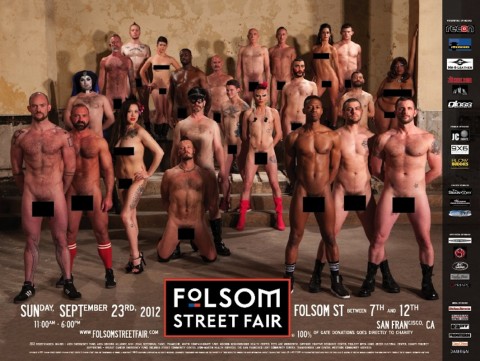 It’s really intriguing- what does it mean to be part of the leather world? Do the clothes make the kinkster? Some people  seem to think that S&M means “stand and model,” and while there’s nothing wrong with putting on a show for others to enjoy (consensually, of course), it does raise some interesting questions about identity and performance.

Although it’s a few months off, if you’re considering going for the first time, you might want to read these tips for getting the most out of an amazing day!

Update: After a couple of comments on my personal facebook page, where I linked to this post, I realized that I had become so delighted with the concept of the poster that I didn’t look more closely at the content or the subtexts. I hadn’t clicked on the row of mostly white, mostly male people in the front and everyone else in the back, if they’re there at all. I still think the concept is pretty good, and I wish it had been executed differently.