I hope you don’t mind that I’m checking in about last year’s request. As you may recall, I had asked for peace on earth and goodwill to men, and I think it’s fair to say that my disappointment is well-founded. Not only are people around the globe still fussing in an unpeaceful manner, it isn’t only men who continue to have an issue with goodwill — you only have to think about that business with Sinead and Miley Cyrus to see what I’m getting at.

Santa, I hope you don’t think that I have any trouble with Miley in her underwear, or for that matter, out of them. I don’t always think getting nekkid is the best choice for a young lady, but I did write Exhibitionism for the Shy — far be it from me to tell that feisty lil’ gal to keep her pants on.

I’m more concerned this year with the way things are trending outside the US for queer folks — Russia, India, and certain parts of Africa have me very concerned. You haven’t even finished up with my 1978 wish, for a LGBT center in every town in the US! Santa, I’m not letting you off the hook; I’m going to keep reminding you until it’s done. I got your memo about same-sex marriage and I agree you’re doing some good work there, even though I remind you that wasn’t what I asked for–I wanted sexual freedom for all, so maybe you’re getting me mixed up with somebody else. I know there’s another Carol Queen out there, but I hear she’s a Chicago cop; get your mailing list elf to check the address! Those two things aren’t mutually exclusive, surely, and I like a nice wedding as much as the next person, but at minimum you’re going to need to place a bulk order for The Ethical Slut for everybody’s gift basket. 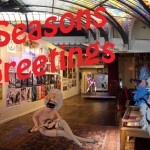 And speaking of sluts, would you assign more elves to the anti-slut-shaming campaign, please? I know you sent some to march with us at SlutWalk–those were cute costumes, too, but I hope you’re not making everyone at the North Pole wear skirts that short. Don’t get me wrong, I’m just concerned about frostbite. I’m not clear whether it’s enough to have the elves monitor Facebook and call out the mean girls and boys; that reminds me of the NSA a little, so maybe forget that idea. I suspect each kid ought to be issued an elf to spend time after dinner every night, discussing ethics. You could double-duty those elves and make them responsible for sex education, too — lord knows their parents aren’t managing either thing.

But Santa, honestly, this just sounds like I’m all complain, complain, complain. Let’s get back on track and think of some wonderful gifts to bring everyone. Maybe the sexual freedom thing was biting off too much before I even asked you for an end to shame. It’s like requesting an electric train without the track. So I think this year, that’s what I’d like. That would let you switch some of the anti-bullying elves to a different post, wouldn’t it? I’m not sure if you’d do this yourself when you fly around to all the houses — is shame controlled by some invisible thermostat that most of us can’t see? Maybe you could just take a sec and turn that thing way down. The ethics elves would modulate the temperature, I think. That way, people get a little more self-love and self-respect — I feel like that would help with the peace and goodwill thing, to tell you the truth.

Speaking of self-love, I’ve been getting so many requests for multiple orgasms this year–I think I want to just pass that right on up to you. Thanks, Santa!