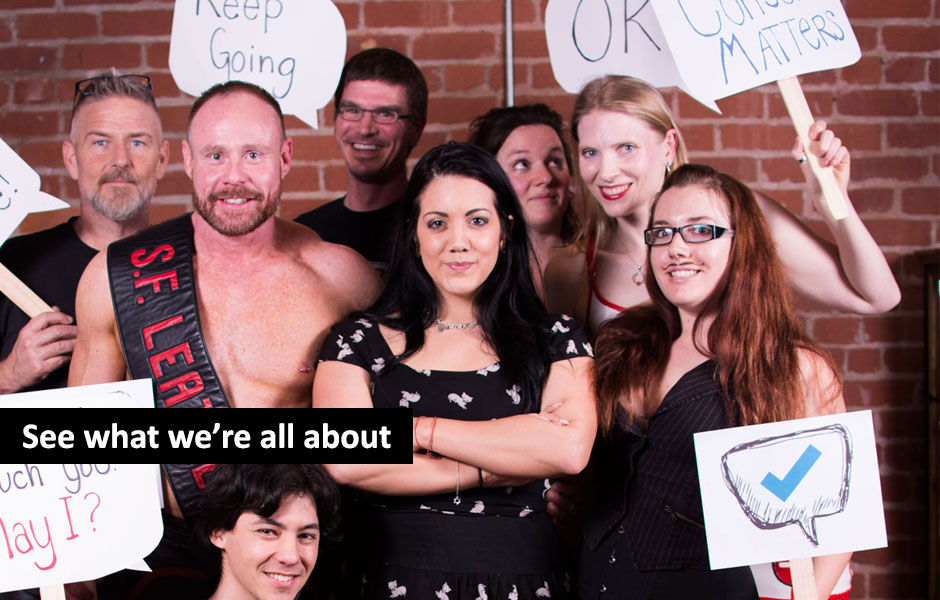 As I write this, it feels as though the entire world is conspiring to get us to think about consent and to take it seriously. Rape and sexualized violence is in the news and shaking up individual lives, college campuses, entire countries. Bullying and intolerance based on a person’s sexual and/or gender status, real or perceived, is common too, and is another form of consent violation. A chillingly articulate young man who didn’t get what he wanted sexually from women shot up an idyllic college campus; it turns out he’d been affiliated with (and disillusioned by) a group of men who purport to teach any guy to get any woman they want; their tactics are criticized by many as manipulative at best. And of course manipulation, pressure and coercion are kinds of consent violations, too.

The news isn’t all about drunken selfies featuring passed-out naked girls shared by football stars, or politicians in India saying outrageous things. It also includes very, very good stuff, the kind of forthright activism that’s necessary to move this epochal issue in the right direction: assurances that It Gets Better, righteous activism by campus rape survivors that’s affected the discourse all the way up to the White House, a woman formerly bullied and slut-shamed who started the UnSlut Project, and a rape survivor who made a film and started a project of her own called The Line. (“Where is your line?”) A flurry of fierce commentary is lighting up the Internet, from pundits on mainstream websites to EveryTweeter (#YesAllWomen #notbuyingit).

Last winter a woman in San Francisco’s BSDM community called me to ask me to participate in a project she was called to start. She herself had been the target of a notorious sexual abuser. He used the cover of a sexualized community with lots of leeway for dominant behavior to drug, dose and rape; groom young victims; and curry favor with influential people in the community, which gave him cover. Like Jerry Sandusky in a far different type of scenario, he was a go-along-to-get-along guy to people more powerful than he was, and a sexual predator on the side.

Consent Matters is tackling issues of consent violation in Bay Area kink community, because many people have had experiences that do not mesh with the way we’re told kink is supposed to be. We’re doing it via education of various kinds, and also by getting involved with people who do violate others’ consent: What kind of support do they need to get them to cut that shit out? Do they misunderstand other peoples’ signals or communication, are they too drunk or high to respect boundaries, do they have the wrong idea about what it means to be a top, do they troll the kink community because they think submissives just don’t say no?

Tops are not the only people who need to learn the communication skills and play ethics that can support consent. Bottoms have to determine what their limits are and be able to communicate them. At the beginning of someone’s lifetime of erotic adventures, this is a pretty tall order. But that’s what the kink community developed these communications skills to deal with: a new-to-BDSM person who needs to feel their way through fresh and sometimes frightening adventures with a person they can trust. It’s why we have safewords. It’s why we negotiate––not just to decide what we might do together, but also to allow us to see how that other person takes their role and communicates. Are they trustworthy? We can really only begin to figure that out as we learn what we need to feel safe. And that’s our responsibility as bottoms––there’s more to it than, “The top is supposed to take care of us.”

Both in Consent Matters meetings and writing my Sexy Sex, Newsy News column, I’ve grappled with what I could do right now to help make a difference. It seems we’re living through a historical moment when consent violations have reached a point of crisis. But of course, what’s really happening is that civic discourse about these issues has reached a critical mass. So my project is to encourage that discourse. Everyone ought to be talking about this: about consent and how to know when you have it, about the effects when it’s not present, about rape culture and slut-shaming, about how to create a culture of consent.

So I’m calling for a Summer of Consent. Everybody pitch in. Teachers, teach about consent—include discussion about consent in every single sex and kink workshop you teach. Bloggers, blog. Tell your stories or whip up a big, useful theory. Parents, talk to your kids. What, you think they’re getting this in sex ed? They’re not. Partners, talk to each other and get even better about communicating than you already are. Practice saying no and practice saying Please.

Consent issues are gendered; they’re associated with top and bottom roles and desires; they’re baked into the cake of sexual attraction. They’re no surprise, because our society doesn’t know how to teach young people about pleasure and desire; they way sex ed classes convey knowledge and try to shape young people’s thoughts about sexual exploration does not give people the tools to set clear limits––or clearly express the specifics of desire. The pop-culture depiction of sex doesn’t give us enough of this, either. So here’s another charge I have for people wanting to support Summer of Consent: Erotic writers, write! Write sexy stories with consent built in. Show us what it looks like.

Come on, everybody: Talk about consent––what it is, how you recognize it, how it affects your sex life, how its absence affects things. What’s enthusiastic consent? How do people who aren’t given the right to a full sexuality even get to enthusiasm?

Use your hashtags and use your words. Make this topic as rich and complex and interesting as we know it is. We’re kicking our summer of consent off with our sex educator colleague The MamaSutra and her two-part piece about rape culture. Now… what do you have to say? #SummerOfConsent