Recently, I had the opportunity to attend a number of events at clubs with electronic dance music and DJ’s.

(Subscribe to my soundcloud to listen to what I’ve been enjoying.)

There is one item that I made sure to take with me on all of my adventures (well, besides earplugs), the Club Vibe 2.OH by OhMibod.

For those of you who are unfamiliar with the Club Vibe 2.OH, here’s what Good Vibrations has to say about it: It is a “remote-controlled, musically-motivated vibration sensation marries sound-activated technology with a neat and discreet design. Contoured to hug the body’s curves, this super sleek vibrator nestles close to the skin and fits comfortably in underwear. Use one of 5 pre-programmed vibration settings to get things buzzing, or expose the remote to the ambient sound and let the Club Vibe thump. Don’t feel like being in the drivers’ seat? Give the remote to your partner and let them call the tune the Club Vibe dances to from up to 20 feet away!”

So I usually kept the remote with me (though sometimes giving it to a partner to hold), turned on to the ambient setting which let the baseline of the music drive the activity. The sensation/vibration did not give me immediate orgasms but when the DJ played some hard house or industrial/techno it stopped me in my tracks and I eventually burst into laughter — if ya know what I mean. Every time other women in the club would see the remote they’d ask tons of questions: what is it? Where’d you get it? How much does it cost? I filled them in on all the details and I would not be surprised if they went out and bought one ASAP. Sometimes they would ask in sort of a whisper “does it go inside?” No, it sits in the cotton panel pocket of any Original Rise Hanky Panky thong panty nicely (the low rise panty has the cotton panel sewn shut).

All of this brings me to a funny story that happened last weekend.

The amount of time I spent out dancing was probably 5-6 hours a pop. I noticed on a couple of occasions, after a while, the vibrator was not on anymore. At first I thought I was wearing out the battery from a couple hours of dancing.  But each time I’ve put in a new battery in anticipation so this would NOT happen on the dance floor. Each time I could turn it back on so I concluded there was no problem with the battery. I began to joke about it with a couple of friends. My friend Mike said casually, “Maybe it finished before you?” 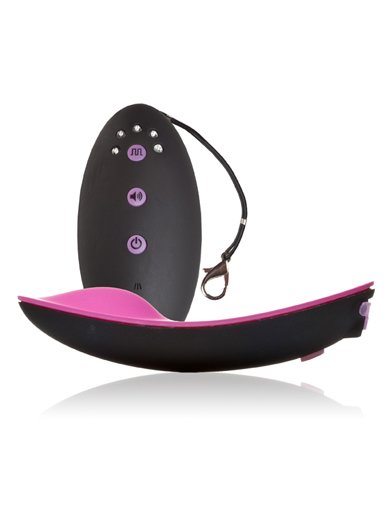 We brainstormed more of the possible solutions:

But seriously, this is one of my favorite toys. It can be used in a variety of settings with or without a partner. Here are some instances in which I have tried it….

Do yourself a favor and buy a Club Vibe 2.OH. I’m positive that you will have a great time and start to understand what all the buzz is about!