Carol Queen’s Center for Sex & Culture Commentary Spot (yes, that makes it the C-Spot, doesn’t it?):  Why We Collect

I’ve been musing about the whole project and process of collecting things. Many of us have collections, sometimes ones that choose us for no discernible reason (my stash of vintage broken dolls, for example). Sometimes the reason for the collection seems clear (my late grandfather left me a beaded handbag when I was ten; I collect those now too, and if I stop to think about it, these are about the only material items that connect me to him in any way). Then there are the kinds of collections that say something about our identities, passions, politics: I collect items to collage with, which allows me to identify and work as an artist; I collect old granddad-era rumpus room gizmos (like keychains shaped like little cameras, where a peep through the viewfinder reveals a teeny dirty picture inside), which is connected to both my love of the past and also to my role as a sexologist; and, of course, the entire Center for Sex & Culture began, in part, as a home for Robert’s and my, and other peoples’, sex-related collections.

The thing about collections, of any kind, is that a grouping of many items creates a kind of conversation — something that one item, no matter how amazing or significant it is, doesn’t do. In this situation, an item’s differences are at least as important as its similarities (as Dina put it, if every item in the group were not different, it wouldn’t be a collection, it’d be stock). Each difference is a design or artistic decision; may hail from a different historical moment; may have been owned by someone very different. The more you look at these differences, the more of the conversation you uncover — even the questions you can’t yet answer. (I think died-in-the-wool collectors hope, or even believe, that if the collection is made complete, the answers to these questions will be revealed. And maybe that’s really true!)

Look at the antique vibrator as an example. CSC holds a collection of them, though most of those are not on display (we actually loan them out to museums occasionally, to give them some face-time with appreciative people). And of course Good Vibrations is internationally known for its vintage vibe collection; even in its very earliest days, GV’s founder Joani Blank kept a few of them on a shelf in the store, wanting the women who came to shop there to understand that vibrators weren’t exactly a newfangled Sexual Revolution thing, but rather might have been in the bedside table of their great-aunt Minnie. Showing a person one old vibrator makes a statement: Wow, that was around in 1910? But looking at a group of them opens the door not to one historical moment, but to a history. You wonder not only where they came from, but also how and why they changed over time. Add in a few more details — like the ads for vibrators that historian Rachel Maines* found in the 1970s while she was researching something else entirely, causing her to do extraordinary original research to track down the vibrator’s story — and you begin to get a sense of the way the item was regarded by its users, its vendors: suddenly it’s not just an historical curiosity, it’s part of a whole sociology. 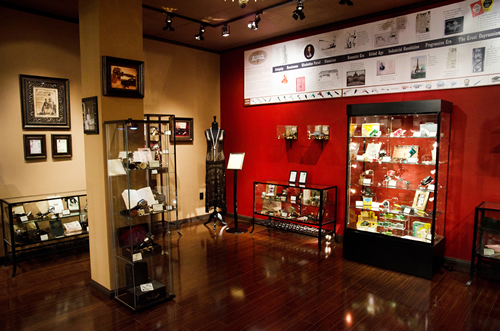 There’s less knowledge about sex informing our history than of many other significant elements of life in different times and places. This knowledge is as ephemeral as the materials that would serve as a window to the sexual attitudes and mores of people who came before us — and this is all the more true of ordinary people, poor people, marginalized people. Their knowledge and lives just aren’t collected with the single-mindedness of the cultural artifacts of the powerful and wealthy. 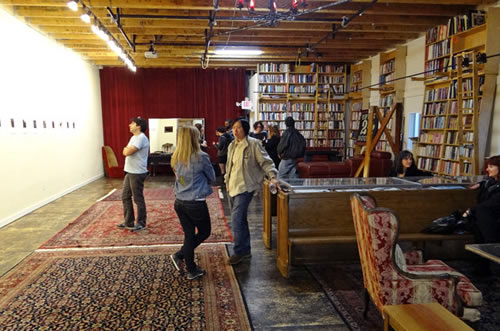 This is why CSC collects all these things. We value the secret stash of the fetishist, the Polaroid self-portraits of the husband and father in which a femmeself is revealed, the porn star’s fan letters that illuminate so much about ordinary people’s dreams and fantasies. (The latter collection is the Nina Hartley letters, the subject of our next show at the CSC Gallery — the show opens on February 1 and we’ll have a second reception on March 1.) Each collection is so much more valuable as an entity than the sum of all its specific items. Several collections together are more significant than each one by itself. These letters and drawings and Polaroids and magazines and lingerie catalogs and everything else — viewed all together — create a conversation, and a knowledge base, about sexuality in the 20th century. And all of us together are, right now, collecting that knowledge for the people who come later who want to understand how sex changed, and didn’t, in the 21st.

You know what we don’t have? First-person information from the people who used those old vibrators. Great-aunt Minnie didn’t keep a diary or write letters about what she did with that vibe — or if she did, someone has already burned them, or has yet to discover them wedged in a trunk in the attic. And that, of course, makes me wonder what common that thing many of us have today will barely make it down the years to the scholars who will try to piece together an understanding of us. That’s why I, and CSC, and Good Vibrations, collect.