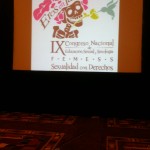 A sexologist can never have too much fun, or have too many opportunities to talk about sex! That’s why I began writing this in Aguascalientes, México, where I was honored to have been one of the keynote speakers at the 9th Congreso Nacional de Educación Sexual y Sexología. If you’ve been following me on Twitter (@CarolQueen) you may have already seen my reports from the field (and I reported on the opening plenary on 10/31, with some amazing political news about sexual human rights being discussed currently by Mexican politicians–the sexual rights law, they tell me, is doing well there!). My big day at the Congress was Friday; in the morning I opened the day with a keynote address on the topic of PoMoSexuality (though I was told later that this is Mexican-Spanish slang for a guy who gets drunk and has gay sex — not exactly what I mean when I say pomosexual, but good to know! No word in English for that, which seems like an important omission). Later in the afternoon I did my talk about 7 Billion Sexual Orientations. (I’ve been working this up for the past year or so because frankly, no way do three or so orientations seem like enough.) Both talks were well-attended, an audience of sexologists, sex therapists, students ands others, and the afternoon talk ended with an hour of lively discussion. Arturo Coronado, my incredible translator, kept up with me throughout, learned a couple of new vocabulary words, and now I think he’s ready to translate anything.

I’d already had a chance to bond a little with one of my fellow keynoters, the great sexologist Eli Coleman, who’s been working at the University of Minnesota for lo these many years, where he directs their Program in Human Sexuality. It was delightful to dine with him, and I learned that he’s been coming to Mexico for years, doing research and networking with the Mexican sexology world, of whom he is clearly a great friend.

Friday night I had a big adventure, going into Aguascalientes Centro with a group of sexologists from the Congress to see the Day of the Dead parade and related festivities. Among them was Dr. Osmar Matsui Santana of the University of Guadalajara; it turned out that he’d spent time at UC Berkeley in the 1980s and knew many of my friends at the Institute for Advanced Study of Human Sexuality. As we waited for the parade to start, we caught up on 1980s San Francisco; then the Catrinas y Catrinos (people dressed as skeletons) came out to dance. By the time the parade, with fantastic papier-mache floats, bands, and groups of dancers, all dressed like skeletons (even the dogs!), was well-underway, we were overwhelmed with Day of the Dead festivities. We were also soaked — the skies opened and the thunder crashed! Pretty memorable Dia de los Muertos, I must say, and (except for the sound my soaked shoes made, and the fact that Osmar and I couldn’t get a cab back to the distant Marriott), a fantastic experience. (We had to be rescued by excellent conference-goers from Monterrey, who had a car. Gracias, amigas!)

The sexologists and other members of host organization FEMESS (Federación Mexicana de Educación Sexual y Sexología) were overwhelmingly warm and welcoming; I have never been treated better at a conference, and I believe there are now about 200 more pics of me floating around the Interwebs, because cellphone cameras were coming out right and left. Some of them might show me dancing to the mariachi band who came to celebrate the conference closing. The event also featured a speech from the mayor of Aguascalientes, Lorena Martinez, a fierce and dignified woman who’s working to end gender inequality in her city. I’ve met great people and new friends — my host, Luis Perelman, was kind enough to invite me to come spend a couple of days in  México City at his home in the Polanco district, so I had a chance to experience a beautiful bit of one of the great cities of the world and make a pilgrimage to the Frida Kahlo House. 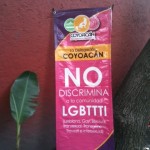 In the first place, MéxicoCity is a foodie’s dream. Love delicious fresh tacos? Check. (Nom nom, Farolito!) Want to spend a chunk of change and experience fine dining topped off with nopales sorbet? Check. (Quintonil–amazing cuisine.) Want to eat mole overlooking the Plaza de la Constitución — also known as the Zócalo? Check. (Restaurante Major Plaza at the Gran Hotel Cuidad de México, a gorgeously overwrought Art Deco palace.) I ate different moles every day, and listen, it’s not like you can’t dine well on Mexican food in San Francisco and Oakland–but exploring some of the wonderful restaurants of México City was a thrill. I also joined Luis as he reported on the Congreso for México’s equivalent to National Public Radio; had a fun and lively interview about sexual diversity with journalist Veronica Maza for her column in Milenio; and checked out extraordinary murals (especially those by artist Rafael Cauduro) in the Supreme Court building. We also visited Luis’s wonderful little bookstore, El Armario Abierto, the sexuality book resource for all of México, which he opened with Rinna Riesenfeld, a writer I’d also met at the Congress (and who has written a book about bisexuality). He was as fabulous as host as I could have hoped for–having grown up in the city, he was familiar with everything and an amazing guide to museum and cafe alike.

I spent one whole afternoon drinking in the extraordinary artifacts of the Museo Nacional de Antropología, which features a room for every region in the country and includes mind-blowing Aztec and Mayan artifacts, among many other things. I got into looking for genitals on the human figures (um, something of a hobby of mine), and Luis told me later, “Oh, you should have seen the things on display in the ’70s!” That is, the many sexually explicit items are in a storeroom somewhere, locked away from the likes of me. Too bad! 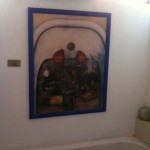 My other museum experience doubled as a personal pilgrimage: Luis and I met his friend Alma Aldana at an amazing converted rancheria, the San Ángel Inn, for a delicious breakfast, and crossed the street to the Diego Rivera House. A complex of small houses, two of them connected by a rooftop footbridge, this was an early home of Rivera and Frida Kahlo. I looked into her very bathroom mirror! Look, I’m a Kahlo fiend and don’t mind admitting it, so when we wended our way next through the streets of Coyoacán–the historic village (and now México City neighborhood) where Frida spent her last years at Casa Azul, the Blue House–I couldn’t have been more excited. The Blue House featured some of her art, her living quarters (including the bed where she spent so much time due to her chronic health problems that she had a mirror installed above so she could do self-portraits while lying there), and a special exhibit of her clothing and personal items. Outside, a poem to her by Patti Smith was stenciled on the wall; a huge Dia de los Muertos altar was arranged on the terrace, and long strands of paper skulls and marigolds, each with a prayer or departed person’s name on it, were hung from the rafters. I added a skull with some of our sex community’s departed from 2013–it’s been a big year of loss around here: Jack Morin, Frank Moore, Carlos Batts, Janice Epp, Iain Turner. Rest in peace, everyone. 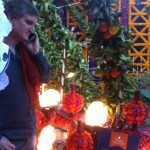 Alma told us that twenty years ago she had wanted to use a Frida picture on a poster for an event at the university but wasn’t allowed to do so because Kahlo was still such a controversial figure; but our tour was enlivened by a whole herd of schoolgirls, soaking up who knows what Bohemian creativity and alt-visionary inspiration. Schoolgirls! Inspecting the bed of the woman who had an affair with Leon Trotsky! It was a sweet culture-change moment, I’ll tell you that.

One more delicious mole–then off to the airport! Where my journey of fabulous Mexican culture wasn’t quite over, because there I got my last souvenir… a tin nicho featuring a photo of Sigmund Freud, patron saint of psicología! It couldn’t possibly have been an artier day. Hasta luego, México y mis nuevos amigas y amigos–I’ll be back.