Good Vibrations is deeply saddened by the passing of Carlos Batts, adult photographer and filmmaker. He was 40 years old and is survived by his wife and muse April Flores, and will be deeply missed.  “I’m still trying to process what happened,” Flores told XBIZ. “He was my partner in everything. We all can’t believe it. It was so sudden.”

Batts worked with Good Vibrations on various film, product, and book projects and promotions, and is remembered for his passion as an artist who challenged and transformed the adult industry’s beauty standards with the work he created with April Flores, known for her voluptuous physique and generous heart. 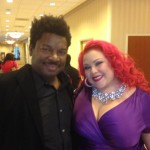 In a recent interview with The Rumpus, Batts shared his artistic and personal philosophy, “Art is the strongest form of activism. Art encompasses everything. It encompasses the queer movement, fat activism, racism, all the “isms”—that’s our job. We’re not supposed to be total consumers…even though I want to be rich and have a million dollar boat, but my motivation is to cross boundaries and create a dialogue, and that’s what I’ve done it for since I was a kid.”

April Flores said of their connection, “It felt like destiny and it felt like we had a message and a vision to mix art and sexuality.”

Good Vibrations Executive Vice President Jackie Strano says, “We hold his memories in our hearts and send so much love and comfort to April for her unbearable loss. We are here as her extended community and family and hold her close in our thoughts and prayers.”