Butch, Femme, and Acts of Service 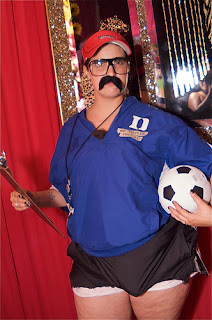 So a while back I had an experiment in butchness.

Not just silly male drag, like you see in this image of me as a gym teacher (working out some past issues with a misogynistic asshole from gym class years ago), but Sexy Butchness, something I always felt fascinated by, drawn to, and completely separate from. I mean, my hourglass body does not scream masculine. Butch and/or male drag is just something I’ve never thought was possible for me.

Planning this costume was one of the hardest things I have ever done, because it insisted I think about clothes in a totally different way- not accentuating my flesh, but hiding it- not trying to look sexy, but trying to look convincing, and realizing that sexy and convincing did not go together if I was to channel the Gym Teacher archetype. I had to think about how I walked, how I took up space. I had to watch my facial expressions and mannerisms. Male drag was a fascinating exploration into my outsider’s visualization of the extremities of male experience. And as it pertains to a performance of alpha maleness, yeah, that I can do. Dressing it has complications, but I can rough it at this point and get the effect I want, and I dress up a lot anyway. 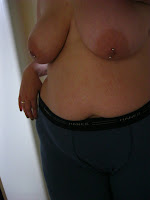 But butchness is still a tantalizing fruit out of my reach. I think maybe I am so entrenched in femme that it’s like trying to relearn how to hold things, something you take for granted until you have to retrain yourself. I mean, femme is, in my experience, something I learned how to be, but I was already meandering down that path so it was easy to take a consciousness detour and keep going.

I am deeply attracted to gentlemanly butch codes of behavior, even more so because I know how complex traversing those codes, trying to maintain some kind of chivalry without being patronizing, can be. “Butch is a Noun” by S Bear Bergman has many of my favourite writings on the subject, and of course the Sugarbutch Chronicles has many excellent musings by a butch who adores femmes that makes me gooey in the knees, like this poem to new butches that makes me frantic and longing and horny, unsure if I want to be with a butch or be one myself. 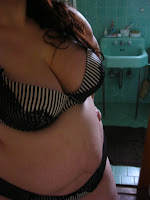 But of course, being femme, you don’t always get Seen. Not by butches, not by femmes, not by other queers, as Sinclair from Sugarbutch reminds butches:

And in a way, I wish there was more of a scene for butch/femme anymore. I wish I could get some queer femme training from an older, savvy femme, or learn how to care for a butch from one who’s been around the block. That doesn’t seem to happen anymore. But then, I’m also weirdly and romantically nolstagic for the Victorian households and, in a different way, the Old Guard,  so I imagine I’m generally interested in structure and Ways of Doing Things Correctly.

Not that one has to cater to a gender dichotomy in relationships, of course- the fact that butch/butch and femme/femme relationships, never mind genderqueerness and androgyny, have become more accepted in queer circles is a good thing. Hell, I’m dating a queer dandy of a boy and a gorgeous femme (who used to be butch, actually) so there we go. These things are complicated, and the heart wants what the heart wants. 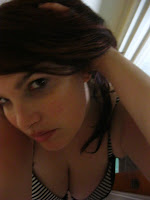 But I found myself reading “Stone Butch Blues” and my heart ached, so much. Somewhere in me there is a femme who longs for butch attention. Though I wonder, sometimes, if it is in fact butch attention that I want, or the attentiveness and caregiving. I mean, I love service submission (that is my major kink) and I love other types of being cared for, so I wonder if it’s that, to me, it seems like butches have articulated best how to care for a femme without making her feel smothered or like she’s being needy. It’s that anticipation of needs thing that I find so hot and that seems to be woven into classic butchness.

I think deep down I have an intense need to feel taken care of. I overextend a lot with projects and trying to help people out and edit thing and promote that and it’s just intensely nice to be able to stop for a bit to be massaged and fed and petted. And I think that there’s been things I’ve read about butches that just makes me go “OMG yes yes exactly like that”- I mean, service submission is often sexualized and made into another erotic performance, though at its core it can be more subtle and less… I don’t know, sexy, I guess, than that.

This musing was all brought about by this video I found, so watch and muse yourself.