The term “teledildonics” was coined in 1975 by Ted Nelson in his book “Computer Lib/Dream Machines,” the same book responsible for the term “hypertext” (as in HTTP!). It refers to devices with which tactile sensations are communicated via data link between participants. The tech relies on haptic feedback, the same kind of technology built into your Nintendo RumblePak from back in the day! Teledildonic sex toys are most popularly paired via Bluetooth connection, though historically speaking they could connect directly into your computer via USB. Modern app-compatible toys are often designed to work in conjunction with other devices, like a VR headset (Oculus Rift!), gloves, or other toys themselves. 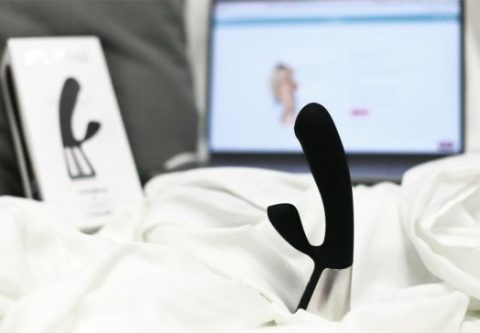 Programmers all over the world have been experimenting with the many capabilities that teledildonic toys offer. For example, a pair of French programmers figured out a way to make one toy vibrate every time the International Space Station passes overhead, to make toys respond to brainwave patterns, and even to vibrate in response to hashtags on Twitter. Now that’s one way to get twitterpated!

The toys mentioned here aren’t just good for long-distance relationships- they’re awesome for people who perform on camera! Some of the apps these toys use provide platform space for cam performers, making it easy to integrate partner-controlled toy usage into cam sessions. They’re also one of the few types of toys uniquely designed for compatibility regardless of someone’s gender identity or genitals, making them incredibly accessible to the LGBTQ community. Furthermore, most can provide opportunity for discreet public play- it may very well be time to update your data plan!

First, let’s start with the Nuo by Je Joue! The Nuo is a super comfortable butt plug covered in silicone. The gentle curve of the toy makes this an excellent option for people who enjoy prostate stimulation. The toy on its own features five speeds and seven patterns and is also waterproof. The app, called Je Joue (for iOS and Android), gives users the ability to create a playlist of custom timed patterns and send it to their loved ones via email. The person with the toy can then access that playlist at any time, making this toy an excellent choice for people in long-distance relationships who may be living in different time zones and struggle to find time together to play. 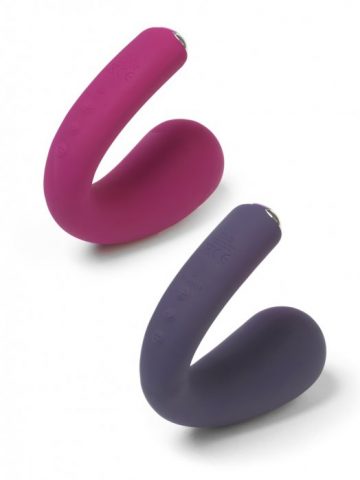 Similarly, the Dua by Je Joue is a dual vaginal stimulator that operates on that same app. The Dua’s bulb fits inside of the vagina, with the outside sitting against the clitoris. The bulb is firm, making it great for G-spot stimulation as you play, and has a motor that sits against the clitoris as well. The Dua is awesome for vagina owners who want dual stimulation while they play, making it an excellent option to use while wearing a harness! Of course, you can also control both of these toys directly from your phone via a Bluetooth connection, which opens up the options for playing in public.

There are plenty of toy options for people who want to play together in real time, too! Here we have the We-Vibe Sync. 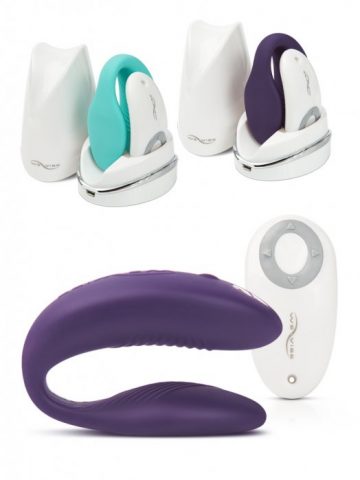 Like the Dua, the Sync is designed to gently hook inside of the vagina, with the outside part sitting on the clitoris. The dual motors inside of the Sync can be individually controlled from the We-Connect app (iOS and Android) with the touch of a finger. The Sync will even vibrate in response to songs in your local music library- you can pick which motor will respond to the treble, midline, or bass! There’s even an option to allow the Sync to vibrate in response to what it hears through your phone’s microphone. Using a data connection or Bluetooth, you can invite your partner to have total control over what happens with the toy! This makes the Sync a great option for people who like to play in public…it is whisper quiet and fits flush against the vulva. As an added bonus, the Sync is flat on the bottom so that you can have penetrative sex while you wear it, and you can both feel the vibrations together…! This isn’t the only toy in the We-Vibe line that is app-compatible. We offer a range of vibrators, rings, and anal toys from We-Vibe that all offer app compatibility, so that no matter who you are, you can stay connected together within the We-Vibe family. 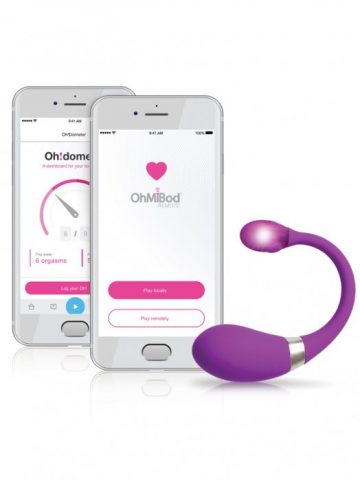 For our vagina owners, we have the Esca by OhMiBod. The Esca is designed to be a G-spot stimulator, and features a small LED light that sits flush outside of the vulva as well. Using the OhMiBod app (again, for iOS and Android), users can have total control over the intensity and patterns of vibration right from their phone. They also have the ability to activate “Club Vibe” mode, which causes the vibrator to respond to external audio input using their phone’s microphone- you can even adjust the sensitivity of the microphone to pick up on things like whispers, or turn it down for loud concerts. The little light on the end of the toy indicates both power level and operating mode-the light’s intensity can be turned up or down so that you don’t have to worry about a light peeking through your clothes if you take it out in public.

Similarly, we also carry the Fuze by OhMiBod, a dual stimulator that is compatible with the same OhMiBod app.

The Onyx 2 has ten rings spread throughout the device that can contract and release independently to emulate the sensation of penetration. The Onyx 2 will also send sensation back to the Fuze, truly creating an immersive experience. The best part about the OhMiBod line is that the toys are compatible with themselves- you can absolutely play together using two Escas, two Fuzes, or two Onyx 2s! The OhMiBod app also offers a feature called the “Oh!Dometer,” which can literally track your orgasms with the push of a button! You can set a weekly goal of number of orgasms you’d like to have, and the app will track the best time of day you have your best orgasm at. It’s a whole new way to get to know your orgasms. 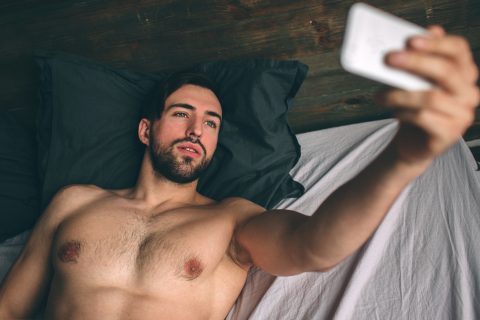 We just have to tell you about this new app that can connect to virtually any Bluetooth-connective toy. The app is called FeelConnect, and it’s from Kiiroo. The FeelConnect app can connect to both the We-Vibe line and the OhMiBod line, as well as other toys throughout the store like the Cowgirl! The FeelConnect app will sync your toys to things like porn as well. All you have to do is click the FeelConnect logo next to any compatible game or video and scan the QR code. You only have to scan it once- the FeelConnect app will remember that connection from there on out, so you don’t have to scan it again. FeelConnect aims to be compatible with virtually every teledildonic toy that hits the market for the foreseeable future, so it’s definitely worthwhile to download and have on your phone!