Staff Sexologist Dr. Carol Queen shares the Q&A from the Good Vibrations Dyke March Booth, where she answered sex questions on the spot! 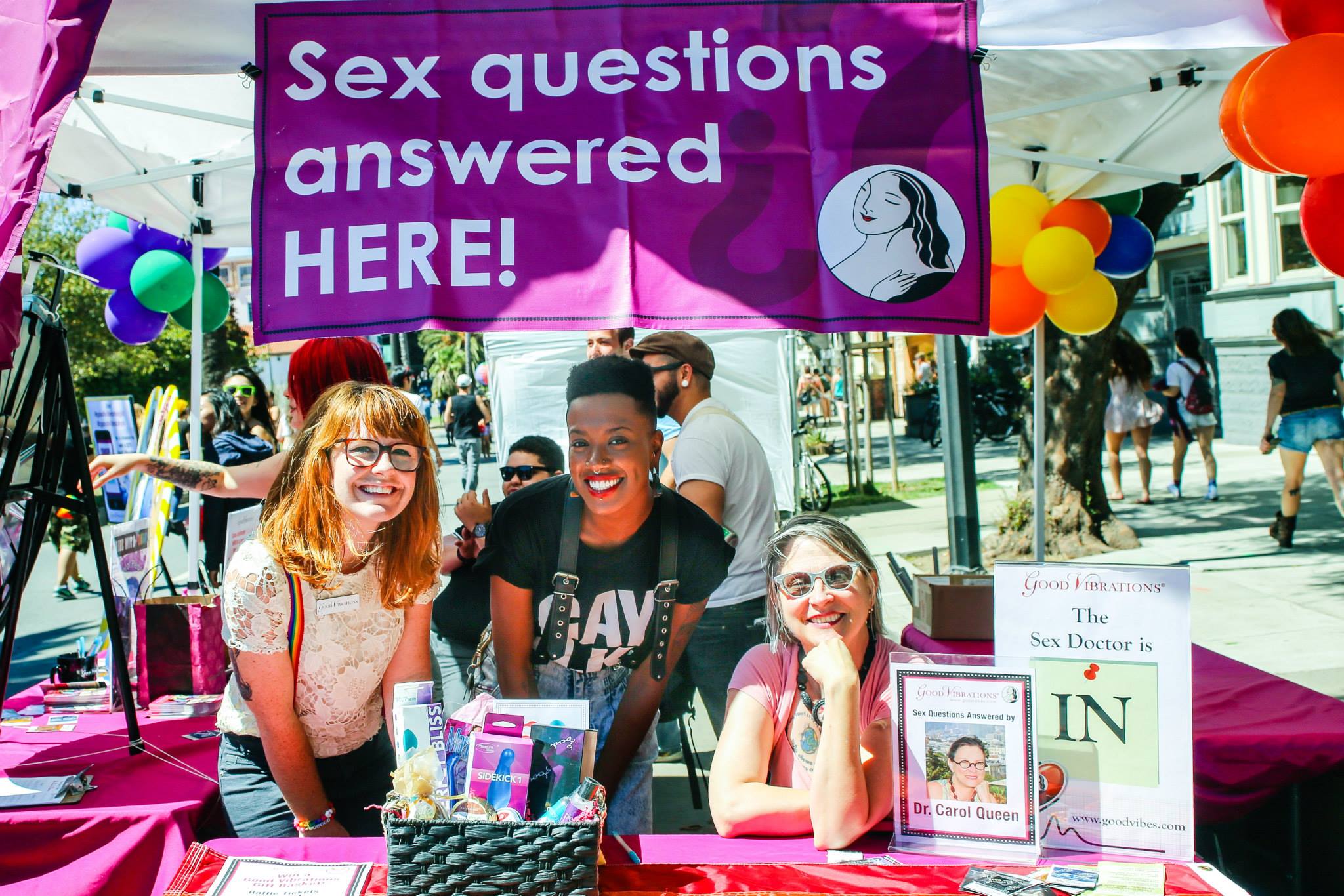 What could be a lovelier way to spend a San Francisco afternoon than sitting with my Good Vibes friends under a sign that said “Sex Questions Answered Here”? At my version of a Lucy booth, no one asks existential stuff about football (obscure Charlie Brown reference, never mind). It’s all sex all the time!
Here are some of the queries I fielded this year (with my answers, or at least the gist):

What’s up with HPV? It’s easier to get it if you have sex with someone with a penis, right? (Asked by a lesbian.)

How do you come out as bisexual in Portland, Oregon? (Asked by a cis woman who’s newly divorced.)

Well, it just so happens that I’m an Oregon girl myself, though I haven’t lived there in many a year. I told this woman that if I were a bi-curious Portlandite, I’d start by going to hang out at the new Portland Academy of Sex Education. There’s a lot of sexuality community action in Portland––a significant poly community, for one thing––and there has been for a long time. I used to take a carful of my gay youth group compadres from Eugene to Portland for their wonderful all-ages queer disco. (In, like, 1977!) Come out as bisexual in Portland, is what I’m saying, and I’m pretty sure Portland will take care of you.

How should I make love to my trans girlfriend? We just got together and haven’t done anything yet. (Asked by a cis woman.)

Said trans*galpal showed up to chat too, and it turned out they hadn’t done nothing (they didn’t need my advice for oral, let’s put it that way), but were interested in maybe some version of intercourse. Hormones don’t always cause the phallus to stay soft, though that’s sometimes an outcome of taking estrogen, and of course not all transwomen would want to do penetration with a phallus––it would depend on each person to determine her comfort level with various sex acts/options. But I talked them through the sexual practice rather inelegantly referred to as “stuffing”––that really needs a better name, huh?––in which, with the right position and enough lube, a non-hard phallus can get into a vagina enough to be quite pleasurable for everybody. Maybe the biggest secret of stuffing is that the position must allow one or the other partner’s hands to get in there: grabbing the phallus, squeezing it like a cock ring to give it a semi-erection, guiding it into the opening of the vagina. People, this is sexier than it sounds, and anybody with a quasi-hard penis or phallus might enjoy practicing this useful skill.

What do lesbians do in bed? (Asked by a middle-aged gay man.)

How can I make sure my girlfriend have an orgasm? (Asked by a young cis man.)

Oh, if only more young people got sex ed that included information about arousal! It was a privilege to be able to explain how that process works, telling him that making out and touching was as crucial a part of the process (for most women) than genital touch, that insertion and/or intercourse need to wait until she wants it (if she does want it), and about the difference between clitoral and vaginal stimulation. PLUS: Talk to your partner about what specifically works for her, since all peoples’ mileage may vary.

After all that substantive fun, I headed over to Good Vibrations’ Valencia Street store just before the Dyke March started. People lined the route with coolers, lawn chairs, and signs. My favorite was a corner house festooned with homemade dyke support messages: Dykes Rock! My Gym Teacher Was a Dyke! Awwwww.

And the dykes marched on by as I rushed over to GV for the Pink Pleasure Party, greeting festive shoppers and rocking out with the burlesque go-go girls from Red Hots Burlesque. I hope your Pride was every bit as fabulous!

To see pictures from the Dyke March + Pink Pleasure Party, visit our Facebook!