Another important topic to cover – STI’s

I went in for my annual gynecological check up last week. The subsequent conversation between my daughter and me underscores how important it is to be up front… and how the conversation can be no big deal, but have a huge impact on the relationship with your child.

School was not yet back in session where I live so, like lots of mothers who don’t have childcare, I needed to take my two daughters with me to the appointment. The girls planned to wait for me in the waiting room but once my name was called Marcia asked if she could come in. I said not this time and she was ok with that. Next year…

Because of my career, I always have the most interesting conversations with my doctor.  At this visit we talked about teens and the preferred methods of birth control (evidently in the area of the country where I live, Mirena is recommended because it doesn’t require irresponsible teens to try to remember to take a pill on time everyday).  When we were finished, I decided to get a full STI panel done.  I wanted this because: 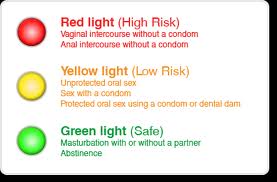 1) I haven’t needed to in a while and knowing your own status is a good thing,

2) I’m out of a long term relationship, and

3) I want to be prepared for when I wish to be “fluid bonded” with another partner.  My doctor laughed at “fluid bonded”…sounded so clinical.  When it was time to go to the lab for the bloodwork portion of the tests, Marcia asked if she could come in for the blood draw as well. I said ok.

While we were sitting there waiting for the phlebotomist to come and draw my blood, and because she didn’t know what I was at the lab for in the first place, Marcia asked, “Are you getting allergy tests done?”

She asked, “What’s an STI?” -obviously forgetting we discussed this earlier.

She asked, “Who did you have sex with?”  I just gave her a look and she said “Oh.” with sort of a half smile. Then she said, “But you don’t want to have any more babies. Your tubes have been tied.”

I said, “Having your tubes tied just means you can’t get pregnant. It doesn’t prevent me from getting an STI if I have sex.” Huge pause as she seemed to contempt something or formulate her next question.

As I said this last part, the phlebotomist entered the room. She was an African American woman who looked young. She sort of looked at me sideways and said, “you talk to your daughter about this stuff?” I explained that I was a sex educator and I would much rather talk to my daughters about everything related to sex instead of having them find out in the playground on their own. She shared with me how awesome she thought that was and that she herself had a baby when she was 14 years old. She said no one talked to her and she was curious what all the fuss was about.  Now that her own daughter was a teenager this mother wants to talk to her daughter about everything too, hopefully so her daughter doesn’t find herself in the same situation she was in.

It’s ok for parents to talk openly and honestly about STI testing.  There is even a new app I have discovered that gives people tools to safeguard themselves (I am checking it out for myself). The topic of STI’s just one aspect -but a really important one- of a greater list of human sex and sexuality topics. Each of you, as parents, is the best judge of your own child’s mental and emotional preparedness for these topics; Just don’t let your own fear cloud your judgement as to when to tackle the topic.  Discussing various aspects of human sexual behavior with your tweens and teens doesn’t mean they will take action. It gives them information to process. Think of it this way: When someone tells YOU about something new, do you go right out to do it? Besides, how many kids really want to do the same sorts of things their own parents do? You could use the “uncool” impression to your advantage.

My Marcia is sort of a little know-it-all anyway but I think she really appreciates the fact that she and I talk about things most parents reject. She understands what a huge part of life these topics are and has no interest in taking part. At least for now.  I want to be there for her when she does and letting her know (leading by example as her divorced/single mother) that STI testing is important is part of setting the foundation.