A Funny Thing Happened on the Way to Pride…

A funny thing happened on the way to Pride… we got rock star parking so we decided to get hitched legally this time. I guess 3 times is a charm!

It really was a spontaneous moment that we got to share with our children this time. We already consider ourselves married and have been together for over two decades so this was a rush to legalize that commitment to each other. I would have planned a better outfit had I known we would be married that day! Like a true San Franciscan and Bay Area resident, it’s all about the parking. Seriously though, we thought we better do it quick this time in case another court stopped the proceedings. So far Justice Kennedy has refused to hear an appeal brought forth by the Prop 8 proponents… so the marriages stand. 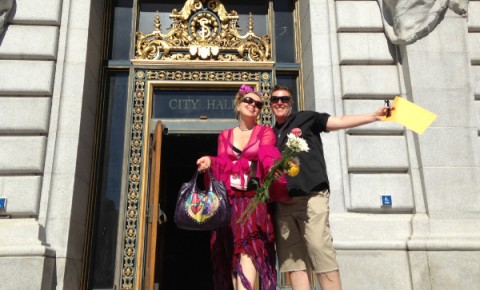 An added sweetness of the day was having John Lewis marry us. John is the Legal Director and Board Member of Marriage Equality USA (marriageequality.org) Good Vibrations and MEUSA joined forces this past Pride Month to focus on marriage equality for all. John was hanging out at San Francisco City Hall during Pride weekend to help marry couples (he is deputized to do so) who had showed up hoping to get hitched before another court order stopped proceedings. The couple he married before us had driven all night from Oregon. My wife, Shar Rednour, and I have been married before. Back in 1996 we had our own ritual and ceremony that involved family, friends, and community but had no legal standing. This was before we had children.

We married again in 2004 when then mayor, Gavin Newsom ordered county clerks to start issuing marriage licenses to same sex couples. We were swept up in the euphoria and elation only to be bitterly disappointed and heartbroken soon after when the California Supreme Court halted the weddings and added insult to injury by declaring them null and void. We were back to being legal strangers at that point and though we had adopted children together starting in 2004, we were still just roommates in the eyes of the law.

Proposition 8 which declared that only a legal man and a legal woman could enjoy the rights and protections of a legal marriage further galvanized the civil rights and marriage equality movement to strike down this law that purposefully discriminated against certain citizens. As we know Prop 8 was overturned by the US Supreme Court on Wednesday June 26th and two of the main plaintiffs in that case, Kris Perry and Sandy Stier finally became legally wed after fighting for 8 years to do so. Like Kris and Sandy, Shar and I have children. This is the line in the sand for me around marriage equality. A person someone having a drunken weekend in Las Vegas can marry someone literally off the street but after 20 years together and 3 children, my partner in life was not allowed by the government to be my next of kin. Even my younger kids know this isn’t fair and I am very happy that in their formative years they get to see the wheels of justice turning in their family’s favor.

Inside City Hall, we got our picture taken at the top of the rotunda next to the statue of Harvey Milk. Our kids were at our side. Later that day we were out in front of Good Vibrations Valencia Street Store in the Mission District of San Francisco and in the midst of the passing Dyke March when Kris Perry and Sandy Stier came walking up in the march. I recognized and thanked them for their hard work and determination and told them that Shar and I had just been married for the third time (legally this time!) earlier that day at City Hall. It was a sweet moment captured by this picture here. 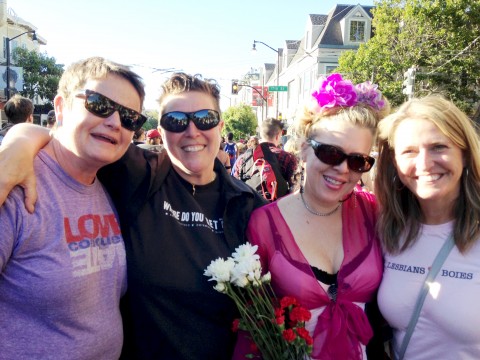 Happy pride and here’s to love and pleasure!!