Recently I’ve been inundated with vampire work- more so than usual. Under normal circumstances that would thrill me to no end, being that I’m a vampire author and very much obsessed with them (Check out my article, Mama’s Obsessions, for proof!). Lately, though, it’s been vampire mania at my house because of the new book I’m writing about Elizabeth Bathory. Um, and by the way, that woman was really crazy. Like, straight jacket crazy.

I started researching and found that not only were there romances involved, several in fact, but Bathory was also one of the first recorded bisexual women in history. That means that there is LGBT sex involved, too. As a matter of fact, Bathory didn’t just have a few moments here and there with other women, she had a lover/girlfriend towards the final years of her life.

As a quick note, though, her girlfriend helped her torture and kill over 600 young, female virgins so that she could bathe in and drink their blood because she thought it would make her look younger. See. I told you she was straight jacket crazy.

The odd thing is that I really love her story. Not because she was such a great lady, she totally wasn’t, but because she was so terrible and she was part of the influence over Bram Stoker’s Dracula. The frustration I’m having is the result of the crazy research I’ve done and the things that I’ve discovered.

All other thoughts aside, researching about her life in Transylvania between the late sixteenth and early seventeenth centuries has made me think about how far we’ve all come. Not just the LGBT community, but everyone. I think that in this day and age people sometimes forget that just a few hundred years ago, women were property. Men were owners. Women were forced to submit. Men were to be dominant. Given those sad facts, it makes me wonder how a marriage (especially arranged ones), in that time, would have worked if the husband loved to be submissive and the wife loved to be dominant? Did they switch roles when in public or did they wind up totally miserable for their entire lives? And what if a very dominant male was married off to a very dominant female? What would happen to a woman who was caught having a romantic relationship with another woman? Was it just frowned upon or were they punished for it? Bathory never was (neither was her very openly bisexual aunt Klara) but that doesn’t mean that other women, of lower financial ranks, were not punished or burnt at the stake for witch craft.

I think that her good old Aunt Klara probably had it made. She was openly bisexual, but wealthy enough that no one could do anything to her. After all, the Bathory family pretty much were the sixteenth century versions of today’s Kennedy family. Also, Klara had a constant flow of ladies coming in and out of her castle. I think that probably meant that it was very possible that she would take in those with her “affliction” and give them a place to hide away or relax so that maybe they didn’t feel so odd. Back then, if your sexual orientation was anything other than straight, there were serious consequences, as I’ve stated before. Clergy, as well as the rest of society, looked at things like masturbation and homosexuality as some sort of illness that had to be medically treated, though I’m pretty sure that the afflicted probably didn’t feel that way. 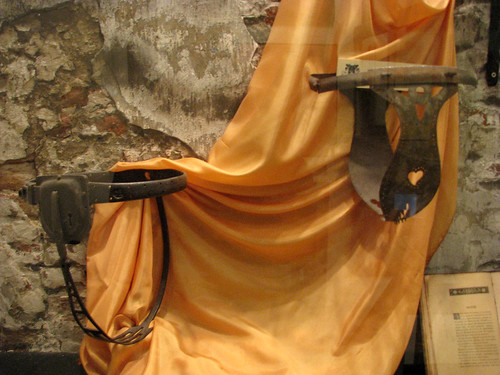 If you’re of any sexual orientation other than straight, you can celebrate that, too. A few hundred years ago, a lesbian couple couldn’t be proud to be lesbians for fear of chastity belts and beheading. Sure, there are still raging homophobes out there, but I’m very well convinced that some of them just don’t realize that two women or two men can love each other and make love to each other and that it’s okay to have those feelings. Sometimes a little education goes a long way. Then again, sometimes you’re wasting your breath, but that’s okay, too. You can’t educate the entire world in a week, and even if you could, not everyone is always going to be willing to listen. However, if you are happy, that’s pretty much all that matters, in my opinion.

I'll take this over a chastity belt fashioned and welded by the village idiot any day...